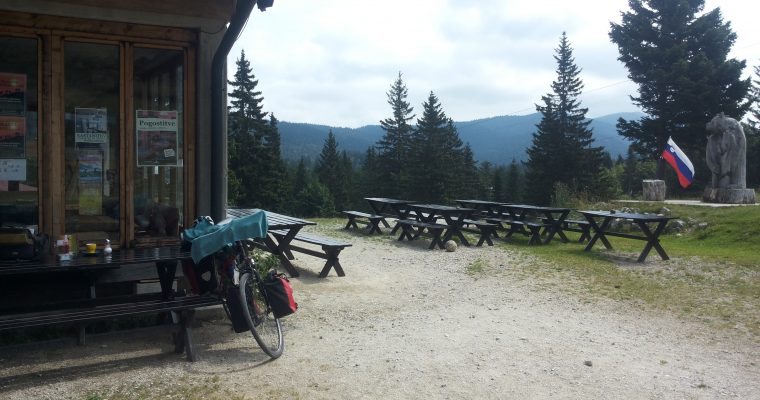 On a calm road going from Bohinjska Bistrica, I was cycling my way up through the woods. I left early so I would have plenty of time for the scenic route. The other holiday cyclists I met at the campsite, avoided climbing their way up and took the road along the river. I avoided other holiday cyclists, so I went through the pass. According to my map, this would be the last climb before reaching Ljubljana, or at least I thought it would be. A very naïve thought, because I am not very good at setting routes and finding them too. I also suck at cycling against the clock or doing things under the pressure of time in general. I try to release myself from that agitated feeling, but I couldn’t get rid of it, which frustrated me. My great efforts may have been the reason for my frustration. I had set the destination for today, because I was going to meet a friend, Suzanne, there at the end of the afternoon. I just felt the pressure.

Despite having become quite practised in my morning routine by now, I needed at least an hour to go through it. Get up, shower, charge phone, have breakfast, do the dishes, break down tent, pack everything on bike, reset milometer and turn on ‘Strava’. This cost some time. I could, of course, just start the day in a relaxed way. Have a nice cup of coffee, stretch a bit, meditate… I had not found the time just yet to do so. On top of that, cycling early was more comfortable. In the afternoon, the sun would be blazing down. This summer was an extremely hot one, heat wave after heat wave, all over Europe.

I left Amsterdam four weeks earlier, fully dressed in rainproof clothing. A few days later, Elise joined me in Luxemburg, also dressed fully rainproof. During our first hours of cycling, we got so drenched with rain, that I couldn’t possibly imagine my gear every drying up. There was a heat wave in less than four days after, and we crossed the Alps in our bikinis.

Then we parted in Briançon. Elise continued to Nice and I had planned to cycle all the way to Istanbul. Unfortunately, I only had limited time, so I had to make a choice: either cover some distance or labour my way through the passes. I chose the latter and let Istanbul be.

I was getting hungry again and it wasn’t even past ten yet! My usual train of thought started to move and I began talking to myself again. Do I really have to stop for second breakfast already? Oh come on, you’ve only just started! Elise and I used to share a pan of oats, which I managed to empty out on my own now. Two hours later, I would get hungry once again. Therefore, I made some extra every morning for my second-breakfast break. Go on, keep going, you have to do 25 kilometres first, I said to myself. I tried not to think of food, but of fun stuff. It would be nice to show the surroundings to Suuz, walking around in Ljubljana for three days will probably be too much. Maybe you should try to find out whether you can get here by train or bus. Perhaps we could take a walk around the Triglav National Parc together. For days, I had been thinking of things Suuz and I could do. We could rent a car and maybe go out and camp somewhere for a night. Go on a mini-roadtrip through Slovenia, where we could go sight-seeing along all the places I am passing by right now. That would me fantastic!

Deep in thought, I reached the col, Bohinjsko Sedlo. It did look like a saddle: a flat long top with trees on both sides. High trees, so there was no view. I was promised to see the sea and the lake from this point, but that wasn’t going to happen. A bit further, there was a sign with a big arrow pointing towards the hut called Litostrojska koča. Hoping to have a coffee there, I started pushing my bike upwards on the unimproved road.

My destination turned out to be an empty outdoor café, at the foot of an inoperative chair lift. A big brown wooden bear bade guests welcome at Soriška Planina. There were no clear signs that showed the hut was open, but the picknick tables lured me over. This place was very different from the seaside resorts in the valley, where I had to share a table with three couples the night before. It was a nice place, although it looked more like a group stay than a mountain hut. It was very attractive and cosy place to be.

The lady of the house was surprised to see me, since she didn’t expect any guests. That evening there was going to be a music festival and she asked me whether I wanted to stay. She pointed at the chair lift destination. From that point I would indeed be able to see more of both the lake and the Adriatic Sea. Two reasons to ‘take off an afternoon’. Everybody had the same puzzled response to me, cycling all the way from Amsterdam. All on my own. Wasn’t I afraid? Then, everyone I met made me feel very welcome. As I went eastward, the people I met became more hospitable.

I explained to the lady that I was on my way to Ljubljana, where I had arranged to meet with a Dutch friend. I would have stayed if it weren’t for that arrangement! Actually, the idea of spending the rest of the afternoon on a couch reading a book was very appealing. I decided to come back to her, maybe even the next day, if I could find a car to rent… 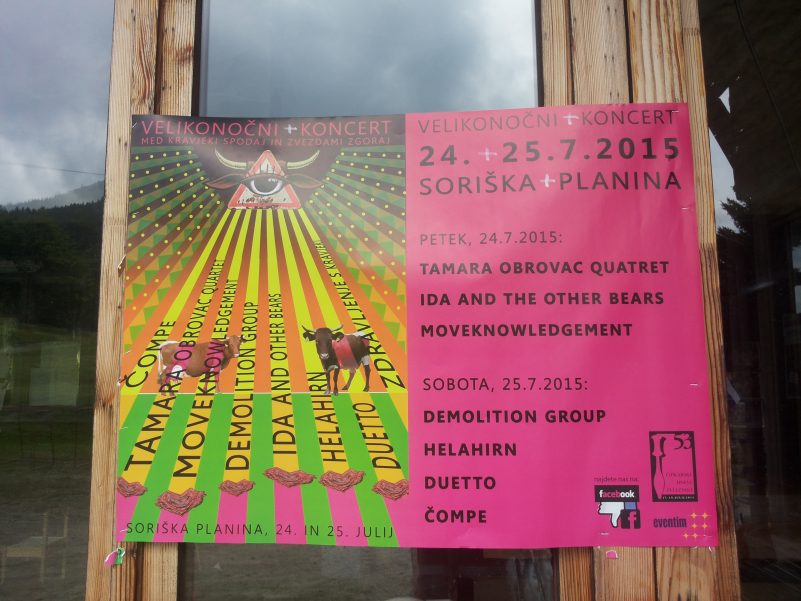