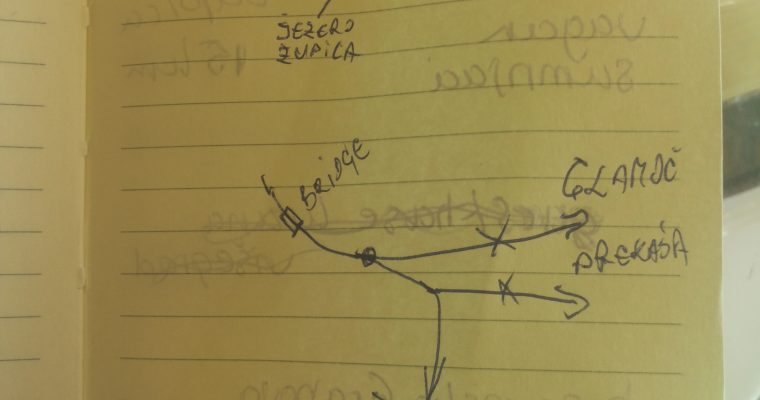 It’s late in the afternoon, I should be looking for a good place to set up my camp before the dogs will wake up from their siesta and start to terrorise me. But the sun is still incredibly warm and I’m in a lazy mood. Lazy and dreamy. I’m gently pedalling my way through the beautiful mountain landscape near Drvar.

When suddenly a car passes by and stops right in front of me, I immediately wake up. Within a second I feel fear instead of laziness. I’m powerless and fragile, I’m a girl on a bike, alone. There is really nothing I can do when someone decides to hurt me. Except hoping for the best. And have faith in people.

The next second I recognise the man I met in Caffe Bar Azzurro in Drvar. He pointed out the route to Jezero Župica where I could find a place to put up my tent. Relief. And immediately fear again. What if this nice man isn’t that nice. What if I’m stupid enough to ignore the most common advise to cyclists who are looking for a bivouac – don’t make it too easy for people to find you. I was following a ‘map’ this man draw me an hour ago…

This man’s name is Ranko. Forty five minutes after he explained how I could find the lake (by marking the roads I should ignore with a cross and writing down names of towns that wouldn’t be on signposts since there were none), Ranko realised that he forgot to give me his phone number and jumped in his car.

“How could I let you leave without giving you my phone number” he said. “This is Bosnia, you know!” I actually think that I don’t know what I it is I should know according to him, but I dug up my phone and saved his number. “If you feel uncomfortable or unsafe, give me a call and I’ll be there in ten minutes. Honestly, don’t hesitate!” Overwhelmed by his sincere intentions, I got back on my bike. Not dreamy or lazy, but impressed.

The next morning I texted Ranko to tell him I’m still alive. He replied in logy but heart-warming English that “I would be in his heart forever”. With a smile on my face and a ‘singing belly’ I continued my journey through Bosnia and Herzegovina.

“Ik ontmoet zoveel goede mensen dat ik me gewoon niet kan voorstellen dat iemand me kwaad zou willen doen.” I meet so many good people that I just cannot imagine that someone would harm me, is what I wrote in my diary. Maybe I’m naive, but I truly believe people are not that bad as we make ourselves think or fear. I’d like to encourage all of us to have a little more faith in trusting each other and trusting yourself, your intuition.

Due to several phone-switching and simcard-changing proceedings, I lost Ranko’s phone number. I found this Caffe Bar Azzurro’s Facebook Page and really hope they can contact me with him… Just so I can say “thanks, it was a wonderful act of kindness – chasing me in your car to give me your phone number”.