Saturday May 14th, accompanied by two friends and with all my luggage I left home and took the night train from Amsterdam to München. Because I thought it would be a good idea to take my bicycle, I had four extra panniers to fill with stuff. This also meant a serious challenge on the journey with all the changes in trains and buses, but I managed.

In München I changed trains to Villach, there I had 10 minutes to change to the Zagreb train. On board we were notified of track work in Slovenia which meant we had to take a bus. This bus took me to Ljubljana and back on a train to Zagreb. From Zagreb there was a daily train to Sarajevo, but it had left 8 hours ago. So the next morning, Monday May 16th, I boarded a last train for the final leg of the journey.

I realize it can be a bit unclear why I’m going to Sarajevo first, why I’m taking 8 months for a 1300 km trail, why I need a bike for that and why, for heavens sake, I’m choosing a 30 hour train ride when flying would be much faster and easier!

First of all I definitely wanted to go back to Sarajevo to acclimatize. An attempt to make the transition from West to East a bit smoother. A layover to get used to the language, the culture and the mountains.

I have plenty of time and I am starting to realize more and more the value of time. I’m not in any hurry, have no strict planning or deadlines. What doesn’t happen today will happen tomorrow. The pressure is off and that feels good. To prevent myself from my usual pitfalls of stress and restlessness I have reserved two whole weeks in Sarajevo to make the last preparations. Because the Via Dinarica team is here, this is where it happens, this is the source. 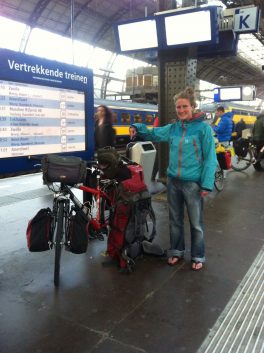 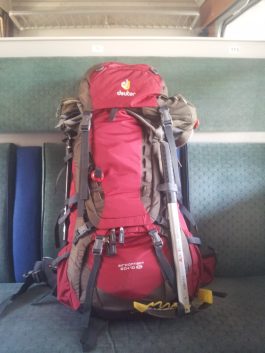 Two months ago I was in Sarajevo for the Via Dinarica Networking Conference where I met a couple of very special people with whom I wanted to spend some more time. The few days in March were hectic and I was a guest taken in tow. Now I am more of a visitor (or tourist), I have my own place and my own time. And my own means of transportation. My bike, RØda Perlån.

As a true Dutch person I cannot live without my bike. To walk everywhere would be quite hard and public transportation is too much of a hassle. Discovering a new city by bike feels strangely comfortable. To be in control of going in my own direction and at my own speed gives me an enormous sense of freedom.

Furthermore there is so much to discover outside the center of Sarajevo. My bike extends my range and is in my opinion essential in a city surrounded by mountains. Of course I won’t take my bike with me on the trail. RØda Perlån will patiently await my return to Sarajevo.

The train journey also had a symbolic value. Last summer Sarajevo was my last destination, now it’s my first. In August I boarded a train to Amsterdam, with the same bizarre amount of changes (including a night in München). I knew what I was getting myself into and I wanted to do the exact same thing in reverse…