After skipping Bobotov Kuk, I told myself to at least go up Maglić, Bosnia’s highest mountain. This peak is actually on the White Trail and it would be easy, according to the French Via Dinarica hiker, Matthieu. He said the view is absolutely worth it. So, this one should be on my list, I figured.

From Nedajno where I met Matthieu, I hiked to Mratinje. A lot of asphalt and macadam roads, but an adventurous descent to Piva jezero. Matthieu had showed me a good bivouac spot at the lake, from there it would be a long day hike to Trnovačko jezero, but do able.

It was great to meet another Via Dinarica hiker. Matthieu had some good stories and could give me useful information about several parts of the trail. I only had done a fourth of what he hiked, but of course I told him about my border crossing adventure in Albania what brought me to Rikavačko jezero. For both of us it was the first other Via Dinarica hiker we got to talk to. Well, I met the Polish Grzegorz, but that was in the middle of the day when we were both heading in the opposite direction. A short exchange of information, going over a few practical things and we went on. With Matthieu (and the Slovenian companion he met a few hours earlier) I spend all evening chatting, drinking and (finally) eating ćevapi. 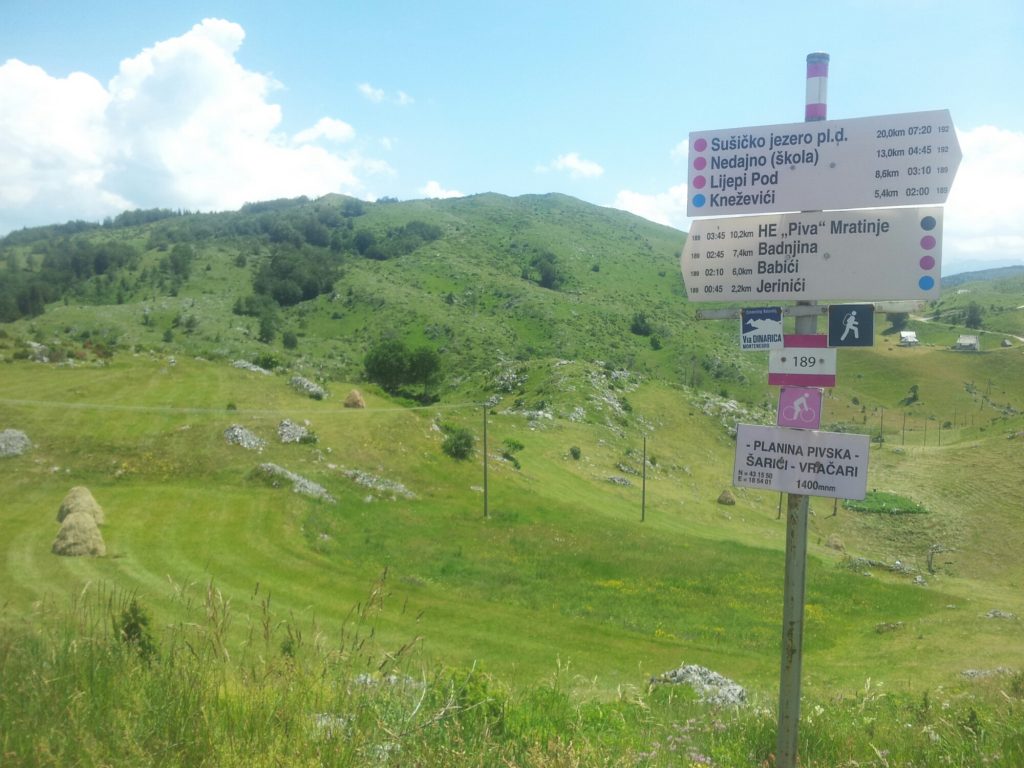 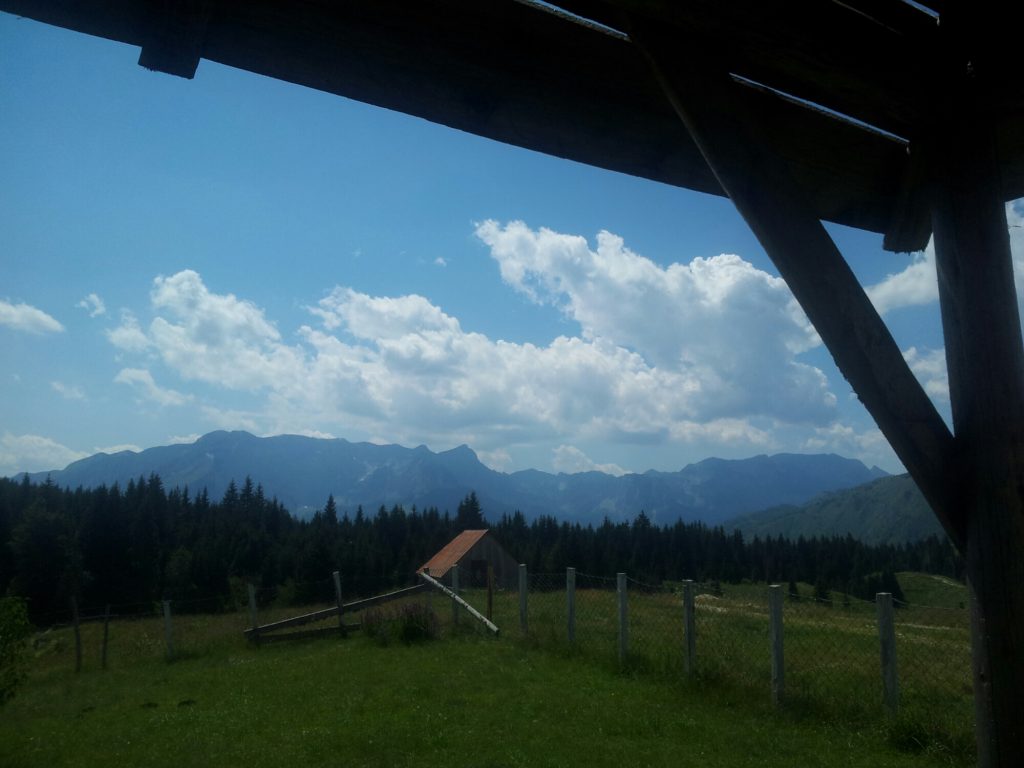 That’s Maglić on the horizon!

Spending the night in Mratinje

Piva jezero is big and it’s next to a road. Or actually the road goes along the river. Tired because I only slept three hours, I couldn’t wait to dive in and make myself a comfortable bivouac. The swim was good, but the bivouac spot was used before. Toilet paper, rubbish, diner leftovers was not what I was hoping to find. On the other side of the lake there were guys shouting something at me, but I felt no need to find out what.

Although I was desperate for some sleep, that place didn’t feel good. So, I picked up my stuff and went on to Mratinje. I knew that beside some houses, there was not much there, but the village looked gentle from a distance. Surely I could find a bit of grass to put up my tent. And I did. “Can I put my tent here for one night?” “Da da.” “Super!” No nonsense, no questions just what I needed.

The next morning a curious neighbour approached me and invited me for coffee. When you drink coffee, you must have a rakija as well. Ah well, why not? “Because you’re hiking up Bosnia’s highest mountain today.” For me a reason not to drink, but here it’s the other way around. I like the home-made rakija and the people like it that I like that. When I tell them I really had enough, they get me a little jar and fill it for me. For on the road. Brilliant! 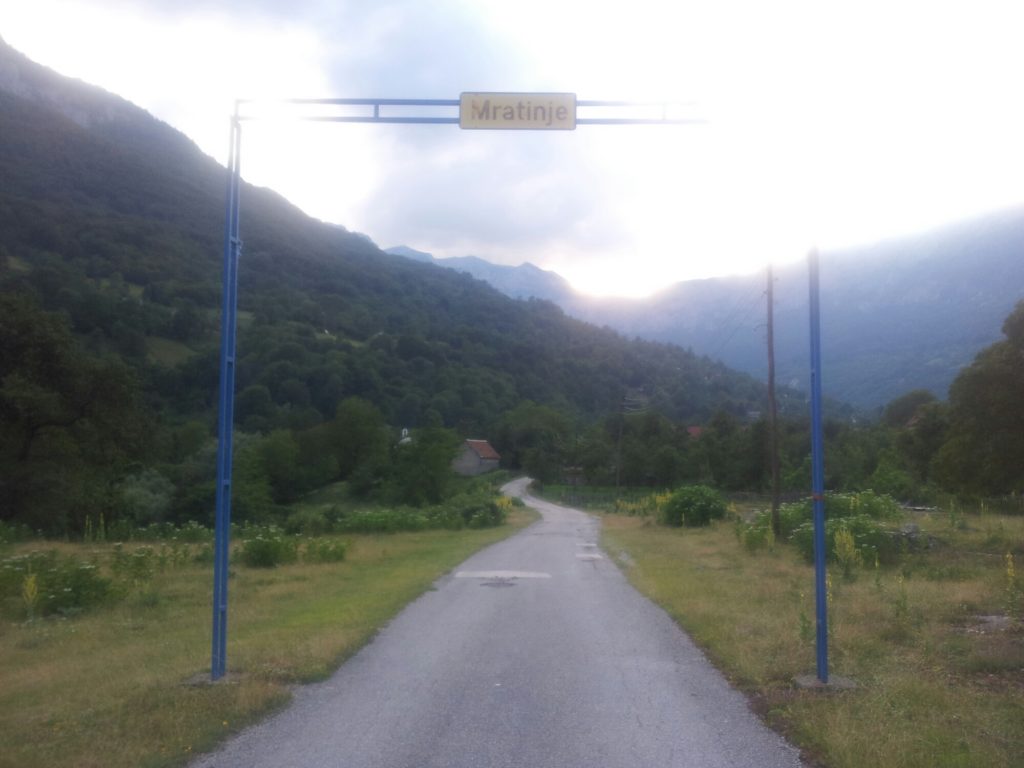 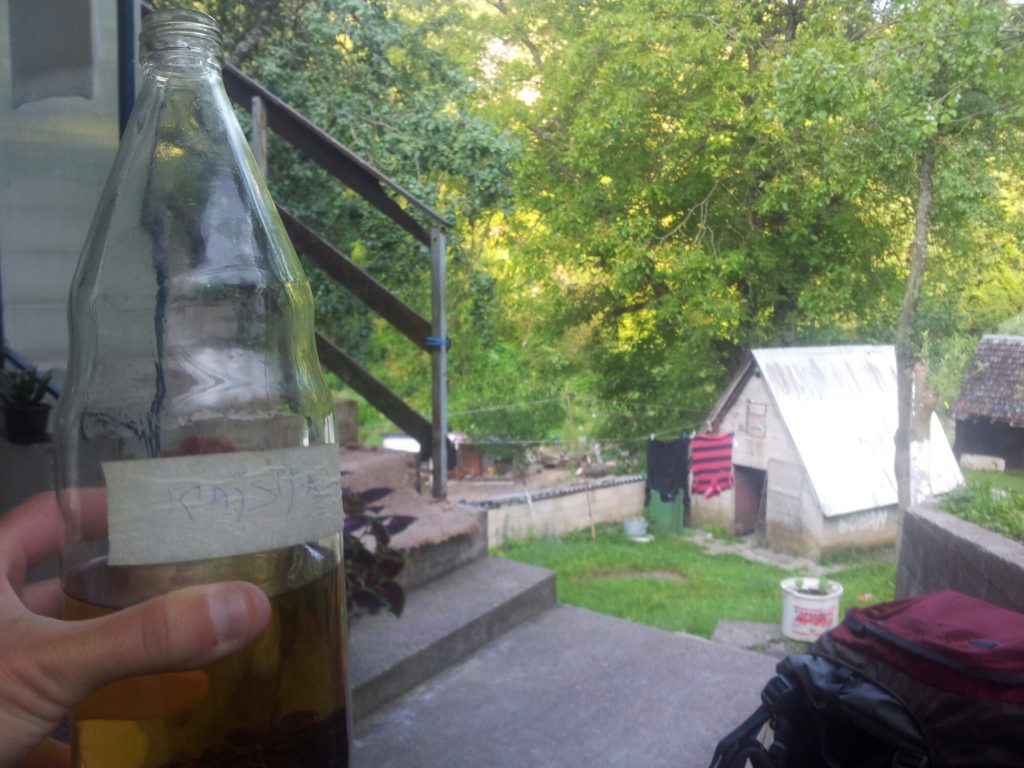 Rakija for on the road

But hey, Maglić. From Mratinje it was a tough climb, 1400 height meters to the junction where I could go further up to the peak. Or down to Trnovačko jezero, I could choose. It was a bit late and there were clouds, but most of all I was tired and just didn’t feel like climbing much more. I could leave my backpack at the junction, that would make me faster. But I could also go to the hut at Trnovačko jezero and enjoy the afternoon with a cold beer…

Again I felt lazy not to go up. Again I might have been too cautious about the weather, but again I should do it for myself. Because I want it, not because I would feel ashamed to tell people I had skipped another ‘highest mountain’. Ahhh, whatever! I picked up my backpack and started hiking.

Down. To the beautiful heart-shaped lake. Trnovačko jezero where I tried to open the little rakija jar I got that morning. Tried, but couldn’t. Luckily there was the owner of the hut who had a solution. I had to drink his šljivovica. Živjeli!