Sunday I was supposed to meet some friends from Sarajevo at Boračko Jezero. Rewinding time! Instead, I got wind up in thorny plants when I tried to take a shortcut. Lost on the Via Dinarica. This is my story about what happened on the descent through the Rakitnica Canyon.

First, I have to say that I realize that knowing that everything turned out fine, might influence the way I feel and write now. I also realize that I scared some people and I feel very sorry for that. It is very hard to consider all the possible consequences of your actions while you’re in an awkward situation. Yes, I would definitely do things different next time. And yes I made some wrong judgments, but this does not mean that I will stop hiking.

Lost on the Via Dinarica

The most important lesson that I’ve learned is an old one. Keep on believing in yourself even when everybody tells you different, including your own insecure self.

On my way to Boračko jezero

Early in the morning I left my bivouac spot at the abandoned village Blace. Totally convinced that I had done most of the climbing the day before, I told my friend Ana that I tried to at Boračko jezero at noon. I was looking forward to seeing her and couldn’t wait to dive in that lake.

A well-marked trail brought me to Vranske Stijene where an old lady filled my water bottle. The next water stop was Dubočani, not far away. Unfortunately it took me much longer than I thought, I lost the markers and improvised my own route. Normally this is the fun part, but now “I had no time for this”, I wanted to swim.

No water, no fun

In Dubočani I felt very unwelcome. The man I asked for water started to yell at me and didn’t want to fill my bottle for a second time. My mood changed, I was done with the hiking, my friends were waiting and wanted to be with them. Instead, I still had 45 minutes to go to Rakitnica river, if I could find the path and then do some asphalt. “Is it possible to come and pick me up?” Nope, no proper road for city cars… I had to hike.

Ah well, I could survive another hour. I was being silly and “weak” to let my bad mood take over. Hoppa, just one hour.

No marking, no fun

I have no idea why the signpost said 45 minutes to the river. It took me twice as long to get to the point where I could finally start descending. Around two, I called my friends again. The marking disappeared, the path was unclear, but I could see where I had to go. It was only 700 meters away if I could walk in a straight line. 400 meters down, though… Through the forest.

Blehhh, I wished I could fly. And I wished I had more water. I was so close, but couldn’t find an easy way down. “Come on, you survived worse. Get some rest in the shade and find your way down. We will wait for you.” That was Edo, but I never got to meet him.

Shortcut. Bad decision. Thorny plants and way too steep to go back. So I went on. Negative thoughts, dry mouth and ohh yeah – thunder. Rain, lightning and dark clouds. Nice.

The strange thing is that when there is serious “trouble” I seem to switch to a focused state of mind. I felt calm and searched for a good place to sit out the worst of the little storm.

Don’t feel too proud to ask for help

I did not like the situation and I wished that someone could pick me up. Although I was doing fine and I knew exactly where I was, I realized that this might be the point that it would not be too late to ask for help. I talked about this with Lorenc, a man I met during trail-marking in Sutjeska NP. “Don’t wait until it’s too late, and don’t feel too proud to ask for help.”

That’s my problem, I usually wait too long, because I don’t want to bother anyone with my stupid mistakes. At three O’clock I texted my friends (yes I still had a good signal) my coordinates and asked if they could hike up the trail where I was supposed to be on. I told them where they could find more information about the route and asked if they could bring water.

In the middle of nowhere

It turned out to be a bit more complicated than I thought. I might know all about Via Dinarica, but I should have thought of the time I have put in this to find everything out. I couldn’t expect that my friends could do this in half an hour.

They went to a WiFi spot to check out where I was and Ana even asked her brother in Sarajevo to look up my location. “You are in the middle of nowhere!” Uhh, yeah kind of, but I was only 100 meters away from the trail. I thought I could hike up, but at that point, I kind of wanted to have people to be closer, just in case I would lose my signal. I certainly did not want to (or could) go back the way I came, that suggestion was not a option.

Stay where you are, don’t move

In the café, my friends met people who knew some guys from the GSS, (mountain rescue service) and at that point they thought it was the best they could do for me. In the meantime, I was sitting and waiting, not knowing what was going on. I made some selfies, but deleted them all, because I looked terrible.

“GSS is coming your way, they know the area very good and it should be easy to get you out.”  What? “They should be there in an hour.” Is this really happening, I thought. I’m going to be “rescued”.

At 17.20 GSS called and I gave them my coordinates again. “Stay where you are, don’t move.”

I tried to explain where I was, but I wasn’t sure if they knew which trail I was supposed to follow. My answer to their question “what do you see?” was not very helping. “Trees, forest and bushes.” It frustrated me that I was no longer in control. I just had to sit and wait. That’s when I started to feel really lost. Lost on the Via Dinarica. 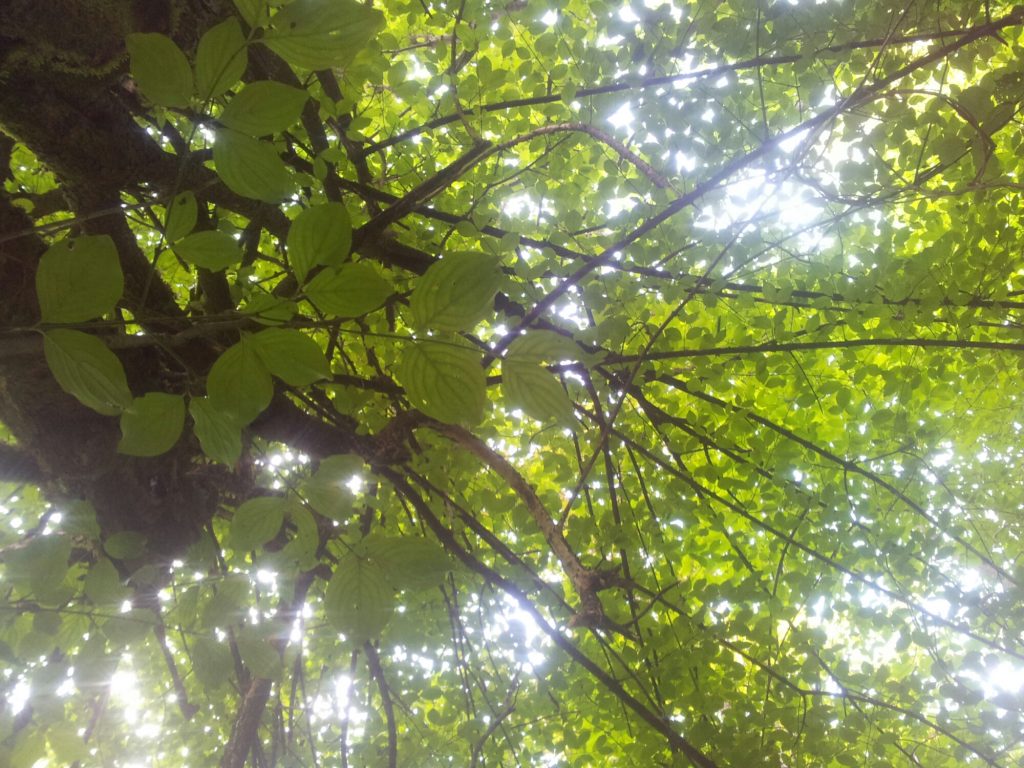 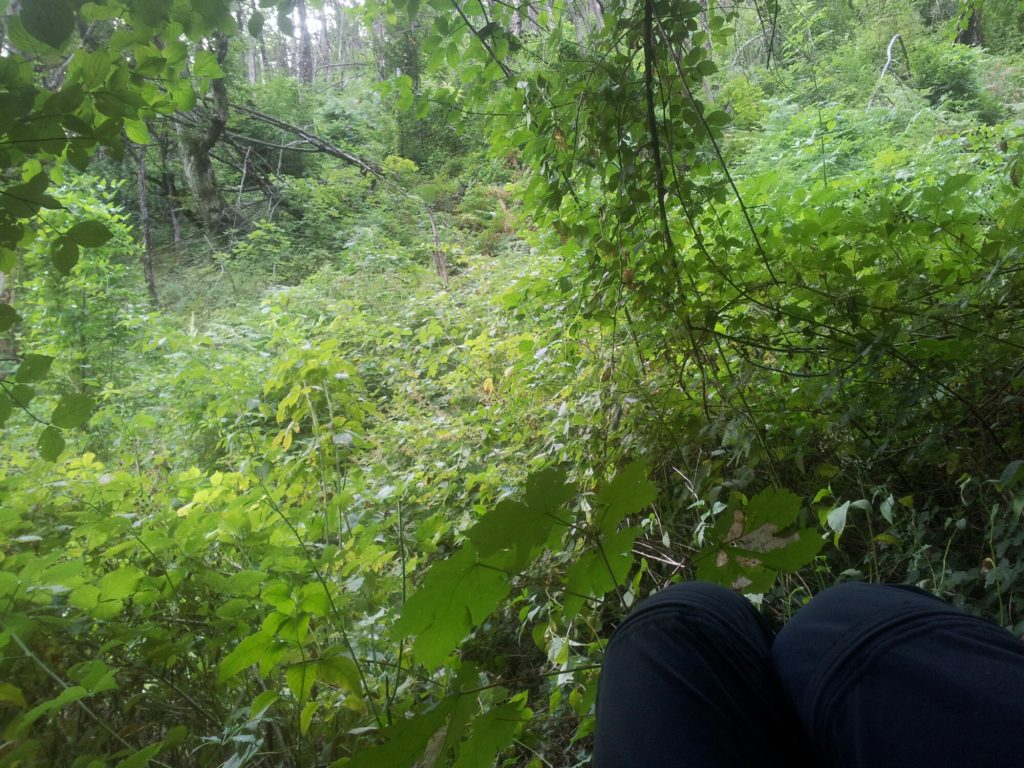 At 19.30 I started to feel desperate. They did not hear my wizzle and I could not hear or see them. I was done with the waiting and ready to move, but they told me to stay at the same place. I certainly did not want to spend the night there and if it would take them much longer, it would be too dark to find the way out myself.

Time for another “hulplijn”, Kenan. He called me back immediately and located me within five minutes. He talked to the GSS and told me that they located me as well. Of course, he wondered why I did not hike these 100 meters west and I did not fully understand it myself neither. The waiting was stressful and at the point that I texted Kenan I was loosing faith in the GSS and myself.

Half an hour later I finally saw a guy, jeej! “Can you come up?” Sure! “Do you have water?” “No.” What?! What?! “The others have.” “Can they come here then?” Walkie Talkie conversation and I heard something about dehydration. It took us only fifteen minutes to reach the other guys who gave me Cola and snickers. I had been at most thirty minutes away from the trail, but I had to be rescued by five men. Luckily they actually seemed to have a good time and I could also laugh about the situation. It made no sense to be frustrated, scared or angry.

Selfie with the GSS

Chatting and laughing about the whole situation, we went down to the bridge. It was dark, but that made the river and the canyon nice and quiet. Beautiful. The GSS guys were great. In the beginning I felt guilty and ashamed, but they were unbelievably relaxed. Sweating, because they carried my backpack, but no way that I got to carry it myself! Pauza, photos, selfies and Facebook posts. I could not believe it, but I have to admit that I liked it. Haha, Balkan style!

They had to call the police to tell them that I was alright. Hmm, the police. I crossed the border at Trnovačko jezero which means that I was not officially in Bosnia and Herzegovina. Actually, officially I am still in Albania. But it was no problem according to the GSS. For a second I worried about my travel insurance which might not cover the expenses, but mountain rescue is all based on volunteers. They don’t ask money for a intervention like this. Lucky me.

They did give the media an exciting story. Dehydrated middle age woman, lost on the Via Dinarica. I was a bit disappointed that I was called a “middle age woman” and that they spelled my name wrong, but the fact that I hardly recognized the story as “mine” struck me. To me, it’s all new that facts are changed into a juicy soap.

I’m struggling a bit what to write and share. I don’t want to say anything bad about the guys who did the best they could to “safe” me. It’s amazing how willing to help they were. It’s a little less amazing that there are different versions of this story. The version in the media makes them a bit more heroic and me a bit more stupid. But that’s the price I have to pay, I guess.