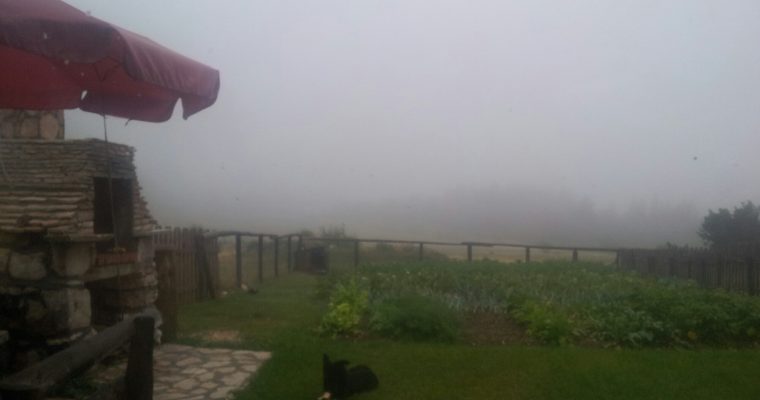 I’m afraid of dogs as long as I can remember. Most of the time they just bark, I know that, but they still scare me. At night, when I’m camping near a village, it’s not the wolves or bears who keep me from sleeping, but annoying crazy dogs. In Umoljani, scary dogs own that place at night. They don’t tolerate strangers, especially not when they’re camping in a little green tent. The second night there was a disaster, one dog started to attack my tent while I was in it. I was afraid and of course, could not sleep at all. At 01.00h I packed my sleeping bag and knocked on the door of the owners of the restaurant who had let me camp in their garden. Sleepy and confused they opened the door, but let me in so I could sleep on the couch.

In Ravna the dogs were just barking, but they made me feel uncomfortable. In Montenegro I had the same experience at Eko Katun Vranjak. As soon as I made a sound (start snoring), those dogs alarm everything and everybody around. Impossible to get some sleep.

Because they scare me, they can get me. They know, smell that I’m afraid and don’t go away when I yell at them. I give them too much space. That’s how I ended up, having myself locked up in the lovely Anastasia house with a dog in the garden that attacked me when I was trying to get out.  Unfortunately the bathroom was outside. At one point I had to get over my fears, since I had to go to the toilet for ages.

This dog didn’t belong to the house or the village. He was a pain in the ass for all the neighbours, because he ruins everything on his way and chases the sheep away. Last night the whole village was searching for 30 sheep while that little black dog terrorized “my” house. Next morning he was still there.

I knew I had to show him who’s the boss, but he already knew I was too afraid. As soon as I tried to open the door, he run towards me and made angry dangerous dog sounds… Whaah, I really had to go to the toilet and I didn’t want this dog to tell me what I could do. The moment he walked to the other side of the garden, I jumped on the picknicktable and climbed over the fence. (This was the fastest way to get out.) I sprinted over the fields to the neighbours, followed by a furious little black dog.

First the neighbours started to laugh, but when they saw the dog, the expression on their faces changed. “Bad dog”, Kristian, the owner of the 30 sheep, said. He picked up his walking stick and accompanied me back to the Anastasia house. When I finally went to the bathroom, Kristian and his wife tried to chase the dog away. Little black dog was not impressed. Neither was he of the sound of my dazer. Pffff, “you have to shoot him” joked Kristans son. Yeahh well… “But he doesn’t bite” he promised me. I wasn’t so sure about that, since he was not barking at me, just attacking.

I went back into my house, locked myself up again.

I’m locked up because of my fears.

So far my freedom.

A few hours later Stipe, the owner of the house came to do some work. Cutting wood and preparing a huge lunch! His dog took little black dogs place, I could go outside again. “Du hasst nichts zu vresen. Der hund ist weg. Geschossen.” What?! They really shot the dog?! I thought the neighbours son was joking, but apparently the dog was not only a threat for me. The risk to loose those 30 sheep in a forest full of wolves was not worth to let the dog live. The dog was bad, so he shot him.

I have to confess that it was a relief. Not only because I could now safely go to the bathroom, but mostly because it was not just me who didn’t trust that dog. Maybe I wasn’t overreacting by locking myself up after all..