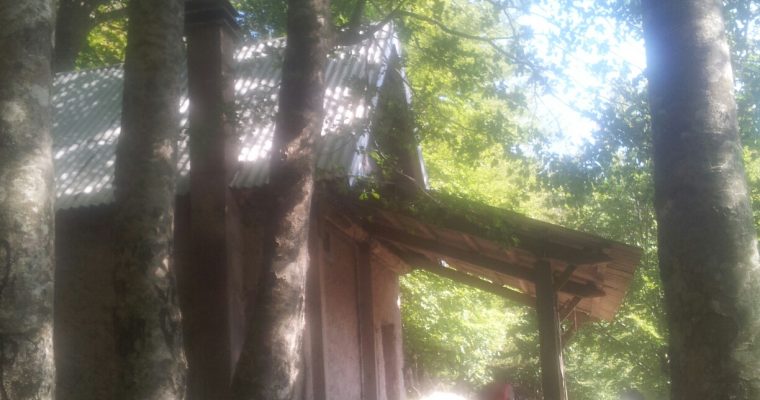 “Well, it is not as beautiful as this place”, the guy said while pointing at planinarsko sklonište Struge.

“Let’s say it is dirty, really dirty. But you’ll survive.”

“Great.” I looked at Caroline and saw a worried look in her eyes. Struge is a great place, but beautiful is a big word.

“There are puh inside”, he continued.

“And the water is bad…” I wished I never asked him about it..

“Ok, we’ll see”, but I knew that the chance that we would be sleeping there, was very small.

Because of all the hopping on and off the trail, I felt the urge to be up in the mountains for a longer stretch. Velebitski planinarski put, a trail that covers Velebit from Zavižan to Paklenica would be perfect for that. It also meant that I could give Ivine Vodice another chance. I needed to see her for myself. Maybe because I don’t want to miss out on too many places, but mainly to proof something to myself. That I’m able to go my own way, even when there are dirty shelters with puh along the way. I needed to gain that confidence.

There are so many people telling you this and that, strongly suggest, recommend you not to go, or the opposite. It’s sometimes hard to stick to your plan, especially because I’d like to be flexible. I don’t want to be stubborn and get myself into troubles. And yes, I’m afraid to make stupid mistakes. All together, this is a difficult combination.

I try to approach it like a learning process. Soaking up as much information as I can, considering the possible risks – what is the worst thing that can happen? – is it worth it? Give it a go, try for myself and then reflect. In this case, Ivine Vodice was still on my mind. I couldn’t let her go. That’s why I decided to enter Paklenica National Park again. This time I walked the Mala Paklenica staza and continued my way up to the shelter. Ivine Vodice.

I’m so glad I did! What a sweet place! Small and cozy, but not dirty. Yes there are puhs, so are there at Struge. I didn’t see them inside though. And puhs are actually kind of cute. They just make a lot of noice and eat your food if you don’t hang it somewhere. I was glad that it turned out to good, but also that I now had an opinion of my own, based on my own experience.

Not only did I find myself at a beautiful place, the company I got from Zagreb made it even better. Sometimes I need to be alone and sometimes I’m happy to have people around. People who still let you do your own thing, don’t judge and don’t take over the place like it suddenly you who is the intruder. While it’s actually the other way around, because they are walking into “your” quiet peaceful place.

With some people I Automaticaly keep distance and with others I don’t think of anything at all. These are the moments I can be myself, without noticing or paying attention to it. With those people I can sleep in a shelter where the matrasses are almost touching each other and still feel I’ve got enough space. Those people can come fysically close, but don’t cross the “my personal space” line. Funny enough I often realise this much later, because at that time it all comes naturally. But it is a special thing when it happens.

Imagine me being afraid of spiders and finding out when everybody is already nice and settled in their sleeping bags, that there is a fat black spider only thirty centimeters away from my head. I let out a little scream. “What’s up?” The guy laying next to asks. “Ohh uhh, a spider…” “Let me see, is it in a web?” “Yes.” “Then it will stay there.” “Are you sure?” “Yes.” “Ok then. You know it’s not a rational thing. Fears.” “Hmm, it’s ok.” And I feel comfortable enough to let it go. To sleep next to a spider. My face of course, turned away from the little creature, which means turned towards the guy, but even that is ok. I trust the guy, because he’s not joking with me. Not judging. The next morning the spider is indeed still in its web.

After encounters like this, being alone feels different. It is a certain type of loneliness which is very meaningful to me. It doesn’t make me sad, but rather thankful for the fact that I meet people who make me feel this way. Even when I cry about it, it’s alright. It shows me that I’m able to have feelings and able to let others be part of them. The other can be a good friend from Amsterdam, but also a stranger. Someone you’ve only talked to for one evening can leave a deep impression or someone you slept next to in a shelter can give you a warm feeling of safeness which will be gone once you’re on your own again. And then, being alone feels different.

I realize that it’s an inevitable effect of special, meaningful encounters. They will almost always leave a trace. Leave me with this strange, burning feeling of loneliness afterwards. This is what I’ve experienced a lot during this journey. Oddly enough it makes me happy. And stronger. A really feel the feelings feeling. I think I’ve learned to let it be there, allow them and even appreciate it. The moving on will come when it comes.

It’s almost the same as being lovesick (is that an English word?). The consequences of feeling deeply for someone is that it hurts when that someone is not there anymore. Or not “your” someone anymore. Although I can surely feel the pain, to me it’s an important and beautiful thing. It’s part of connecting with other people. And as long as I’m able to connect, I don’t feel lonely in a bad kind of way.

The (ex)boyfriend, a dear friend, a stranger who crosses your path and offers you a place to stay or another hiker, there is probably something we have in common. Something that we share that binds. With some people it lasts a lifetime, with others it’s just a certain period. And yes sometimes only just a few days, hours or an evening, but all of these experiences are dear to me. They mean something.

I’m not searching for it, but it might be that something that I lost. Or that thing I was afraid to loose.