The Via Dinarica is a trail that is still in progress, only in Bosnia and Herzegovina the White Trail is officially open. In the other four countries the route is a combination of old existing trails that all together form a corridor through the Dinarides. With a distance of almost 600 kilometres, the Croatian section covers the largest part of the Via Dinarica. An absolutely beautiful stretch through the incredible Croatian karst mountains.

Via Dinarica White Trail in Croatia

Although the hiking paths between well-known areas like Dinara, Paklenica, Velebit and Risnjak are often overgrown or don’t exist at all, it has been wonderful to hike and experience this part of the White Trail. To be able to enjoy it the best I could, I choose to walk it my way.

The first option is to fight your way through the wilderness, – not my favourite – another option is to skip these ‘in between’ parts, but I decided to connect the popular places by hiking the biking trails. A lot of asphalt, yes, but also a lot of time to look around. For me, hiking on those roads was just as much part of the journey as every other part.

It’s what I love about long distance trails. To cross a whole region, an area, a country and connecting the dots. Step by step. It goes slow, but with every step you take, a line on the map or another unpronounceable name on your GPS screen turns into something real. Into a story, your story.

Dinara for example was just a name of another mountain to me, but once I saw her myself, I understood why the trail is named after her. She absolutely dominates the area. It took me almost three days to reach the trail-head. Three long hot days on old, exposed roads. Behind me the mountain Kamešnica slowly disappeared at the horizon and right in front of me the contours of Dinara became sharper and sharper. Because I was on the road, I could feel her impact growing on me. And because I was on the road, our story started before I could even touch her.

Dinara is dry and unpredictable. Twenty minutes before the top, she showed me who’s the boss. With strong winds and dangerous dark clouds, she forced me to turn around. I could not take her and to walk the same way back. Well, what to say. That’s life. That I couldn’t reach the top, didn’t make the hike a waste of time. On the contrary, it made it unique and hey, I got a reason to come back! 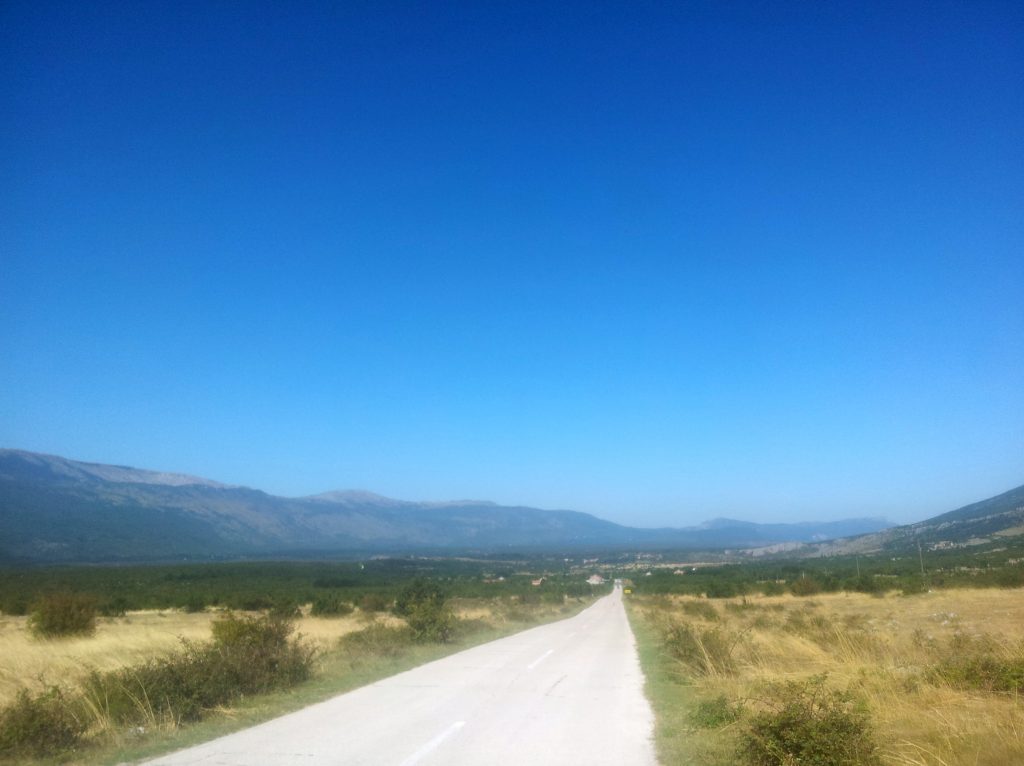 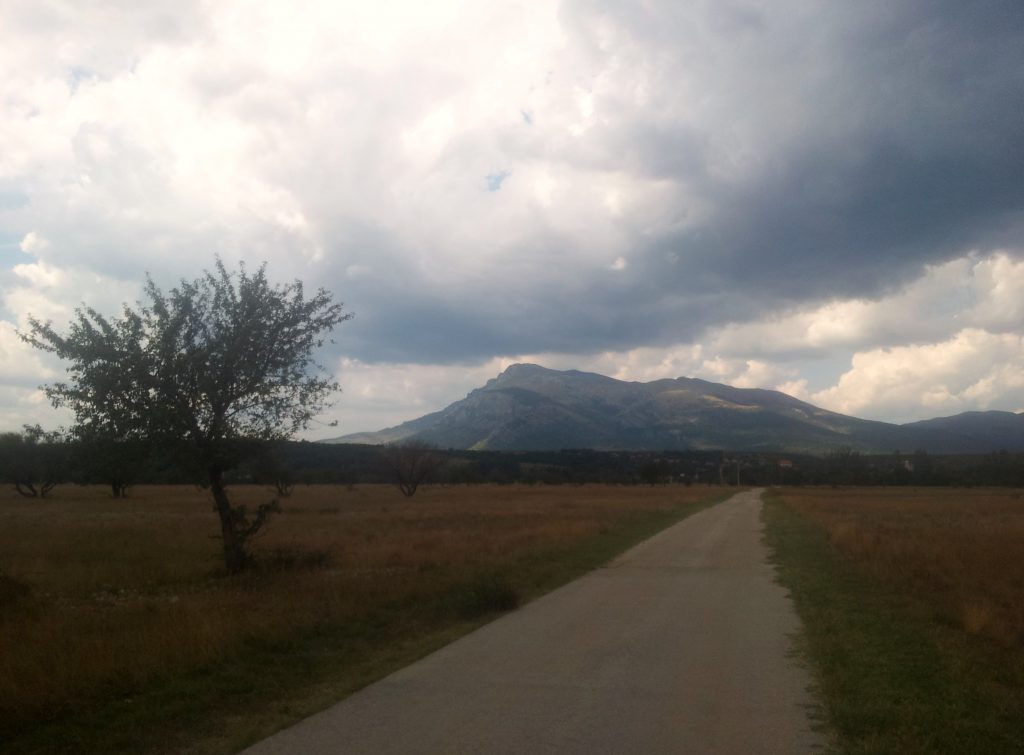 All summer long I had a bit of bad luck with the weather. I started to think that there was not only a backpack, but also a peak-devil on my shoulders. Every time this little devil spotted a peak, he ordered some clouds, thunders or wind.. I know I might be too careful or easily scared, but I’ve been in some bad storms in the past, I really don’t want to take any risk now I’m alone.

I had enough time, I could wait. Wait out the bad weather and give my body and mind some rest. 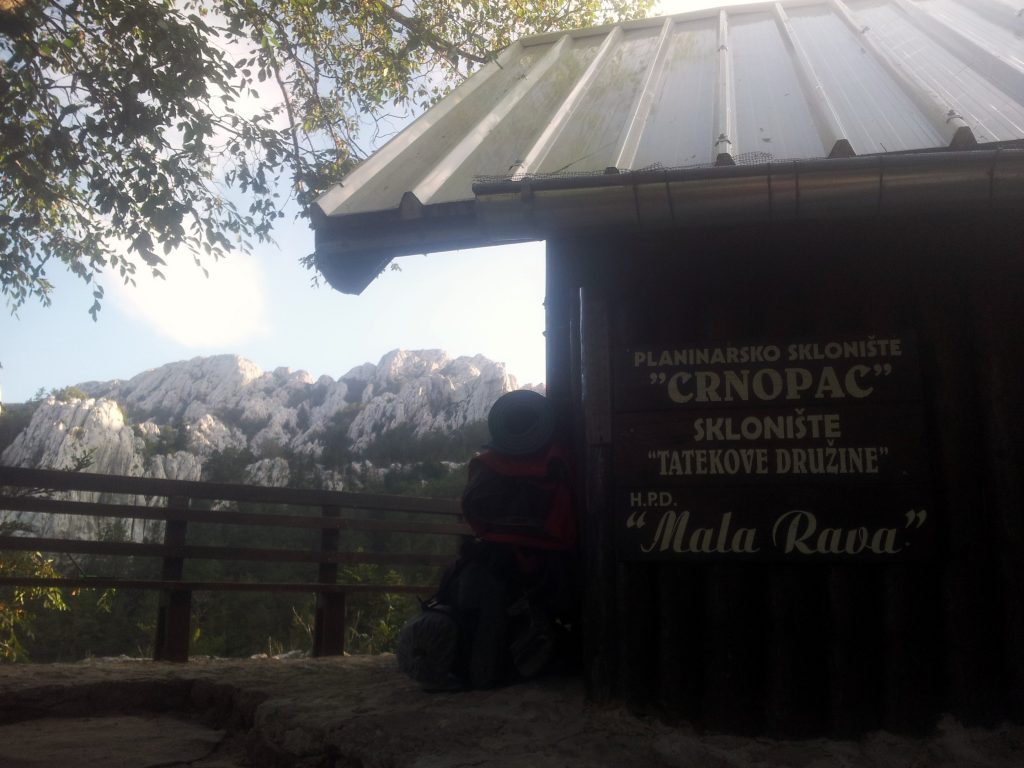 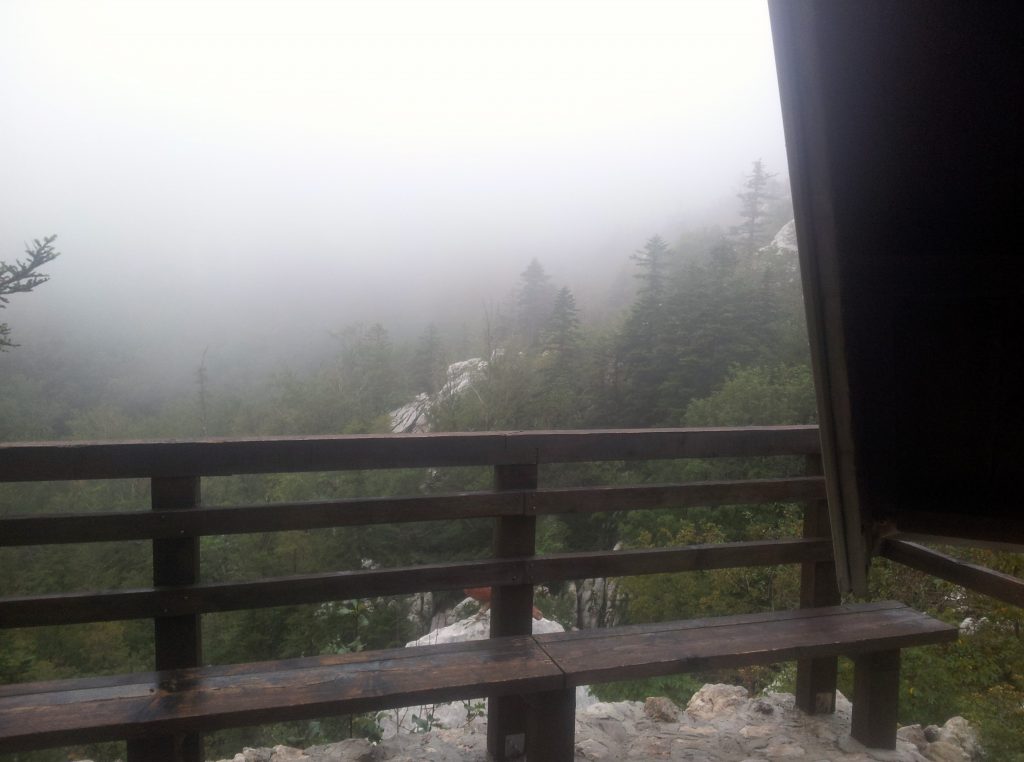 No such thing as bad weather? #bura 😉

At Crnopac I spend three nights in the lovely Tatekova hut, because there was an extremely strong wind, the bura. I didn’t get the chance to hike the Mali Princ trail or climb the Crnopac peak, but it was a beautiful experience to be completely isolated from everything and everyone. I loved it. And I will come back for this Mali Princ, for sure.

In Paklenica NP I got company from a friend from Amsterdam. Together we hiked through the popular Velika Paklenica Canyon up to mountain hut Paklenica. Instead of following the Velebit Trail, we made a little round trip that brought us back to the sea. Two weeks later, when I was back on my own, I choose the less popular NP entrance, the Mala Paklenica Canyon and continued my hike on the Via Dinarica. 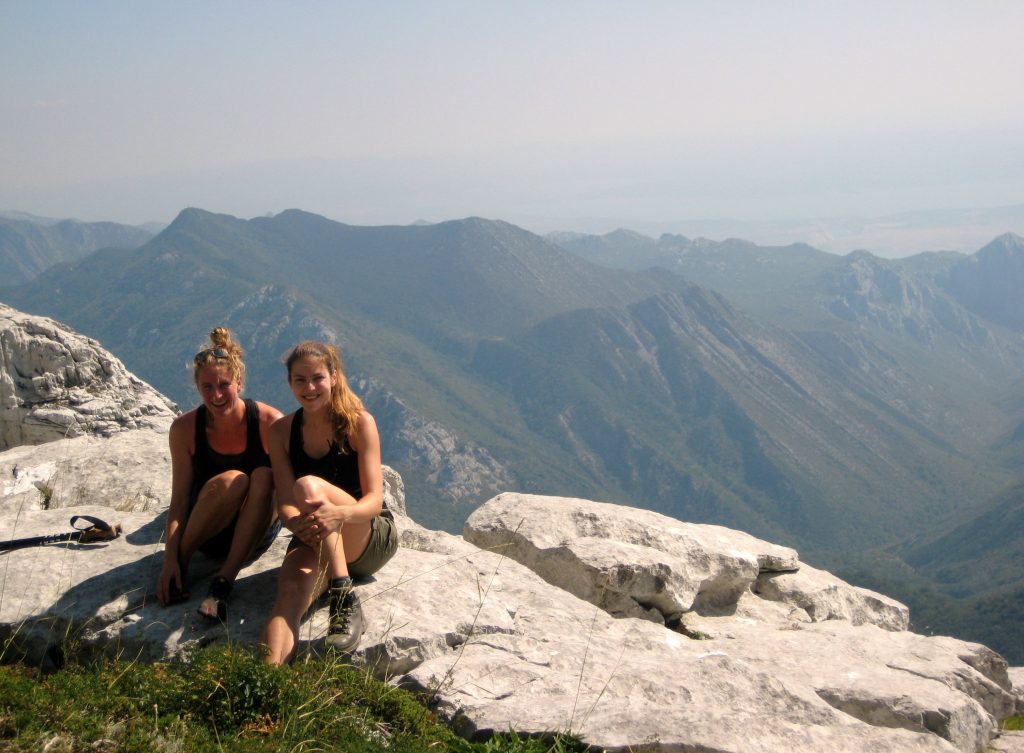 Pose in front of the canyon 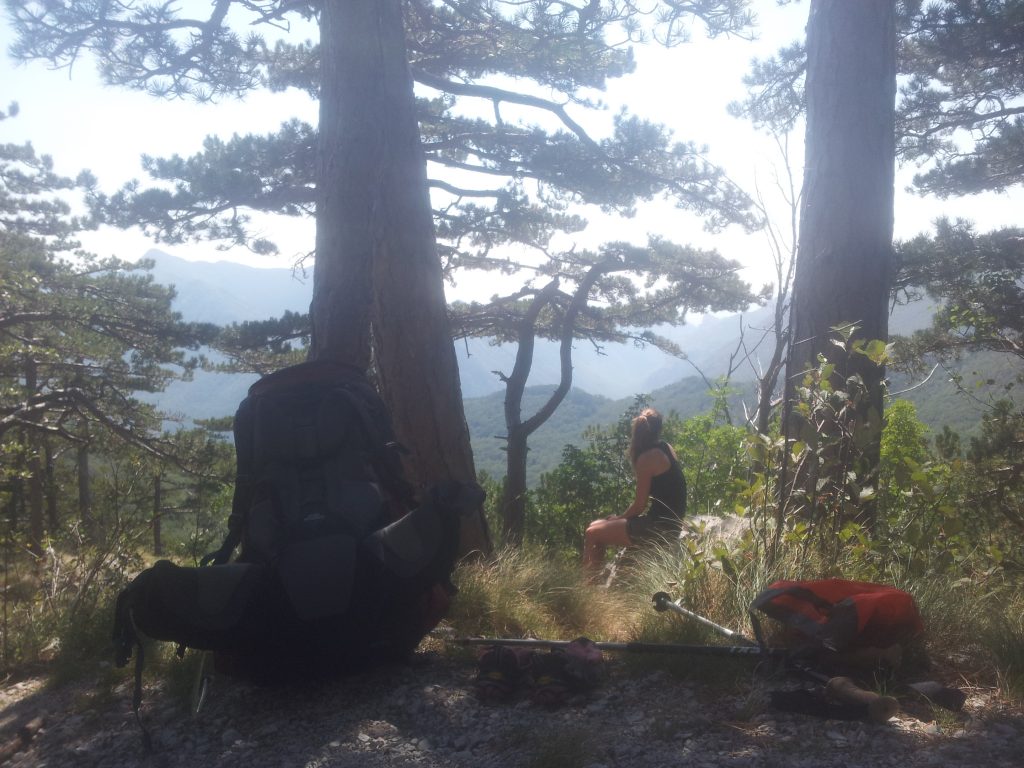 The 100 kilometre long Velebit Trail from Zavižan to Paklenica, or Velebitski Planinarski Put, is definitely one of the highlights of the Via Dinarica in Croatia. Velebit forms a natural border between the Dalmatian coast and the mountainous hinterland, so you constantly have a great view on the Adriatic Sea. Velebit is Croatia’s pride, it’s their only mountain range that completely lies in Croatia and therefore an absolute must for every Croatian mountaineer to hike the entire Velebitski Planinarski Put at least once.

Along the trail there are several mountain and bivouac huts where you can stay for free and where, if you are lucky, can witness the cosy, tasty and noisy Croatian traditions. As a girl (woman) alone, it was impossible to stay unnoticed. Before I could even start to protest, I was invited to share the table and a plate full of local delicacies was put right in front of me. ˝Try! Eat!˝

Well, what do you do then?

After Velebit I had to cross another ‘in between’ part in order to get to Samarske Stijene. Velika Kapela. ˝This part is something special,˝ I wrote in my diary. ˝You’re just a little ride away from the coast and even closer to the mountains. In between there are hills, forests and small villages. The wind blows and the sun is shining. Leaves are falling from the trees and the days are getting shorter. People work on the land or in the wood-industry. Nothing reminds you of the coast tourism, except the views on the sea.˝

It was great to be able to wonder, ponder and look around instead of watching my steps all the time.

˝I am on my way to Samarske Stijene. The hiking path still needs too much work to call it a trail. I am too tired to fight my way through it, so I stick to the road. I won’t complain, it’s lovely out here. A different approach, but still an adventure.˝ And that’s when suddenly something big, something brown and fluffy walked out of the bushes right on ‘my’ road. A BEAR!!! I saw a bear while I was on my way to Samarske Stijene.

The last ‘pearl’ was Risnjak. A green, forested National Park full of Lynxes. No, I haven’t seen any. From here I left the White Trail and created via my own route towards Slovenia. I wanted to hike from the Croatian Snežnik peak to Veliki Snežnik in Slovenia, but that’s not an official border-crossing. ˝Strictly forbidden!˝ Instead I went further south to the border check-point at Rupa and continued my own route through Slovenia.

By hiking this alternative route I avoided the parts where the hiking trails are not maintained and where fallen trees block the path, but again, I walked quite a lot of asphalt. Which I again, actually liked. Quiet and scenic roads through typical rural areas which people might call “less developed”, but in my opinion have more soul than all the touristic coast villages together.

Although I spend almost two months in Croatia and hiked, according to my Outdooractive statistics, about 700 kilometres, I still haven’t had enough. There is much more to explore, many places to go back to and plenty of pearls to connect. Croatia’s karst is really really, truly incredible!

Via Dinarica White Trail in Croatia an alternative border crossing