Home Blog Life & Adventure Journal Walking from Amsterdam to Sarajevo RED trail it is, hiking the Via Alpina in Italy

In August 2017 I hiked the Via Alpina in Italy as part of my thru hike from Amsterdam to Sarajevo. On the Via Alpina I kept on crossing borders. Italy, Austria, Italy, Austria. The trail follows the mountains and well, nature does not know borders. Borders are often formed by nature, but I could hardly see the differences. So, I “filed” this part under “Italy”, but parts of this stage were in Austria.

For more information about the Via Alpina Red Trail, go to the official Via Alpina website.

Via Alpina in Italy

Today I took a “shortcut”, instead of going down to the village Dun, I hiked the Pfunderer Höhenweg or the Alta Via di Fundres from Engelberg Alm to the Edelrauthütte. I didn’t quite understand why the Via Alpina made a detour on the road that includes a lot of unnecessary descending and climbing. “Maybe there’s a Klettersteig in this trail,” I joked. Well, there kind of was. That mountain pass in the back (Gaisscharte) that’s a tricky one. After bouldering my way up there I seriously had to focus, a 20-30 meter climb down with steel cables and footholds was fun, but surely not easy. I like climbing, so I had a great day. My variant was shorter (in distance), higher and probably much more beautiful, but I do get the detour. These were my slowest kilometres so far, but worth every step.

The Neveser Höhenweg, what a beauty! At the same time it’s sad to see the glaciers disappearing. Well, you can’t actually see them disappearing, but they are. What to say? What to do? A while ago I met a Slovenian artist who’s work is about raising awareness for those melting glaciers. He makes it visible. It’s inspiring how creativity and passion for nature, mountains, come together in his art. There are also people who hike to raise money for a charity. A global warming charity, does that exist? Probably. But then what? What is done with the money? Can money really help? And that’s why I feel sad. It’s all about the money. First we use and ruin nature to make it (money) and then it turns out that there’s no money in the world to repair the damage. So yeah, what to say? What to do? 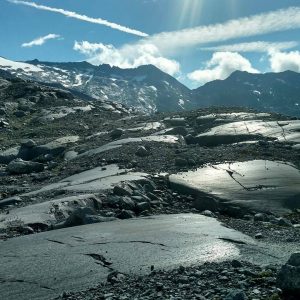 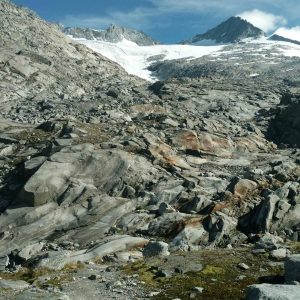 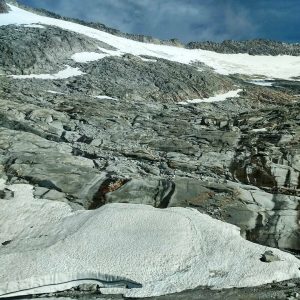 Here I’m on my way up to the Rieserferner Scharte, at almost 2800 meter. A stranger took this photo of me while I thought he was making a selfie. So, this is me in action, sweating-my-up-in-action. And the great thing is that this guy kept his word and send me the photo the next day. So thank you Christoph!

Yeheahhh, I’m in the Dolomites! A few years ago I hiked the Alta Via Dolomiti 1 and it feels special to be here again. The Via Alpina follows this route from Pragser Wildsee (Lago di Braies) to the Seekofelhütte (Rifugio Biella), a pretty climb from the crowded lake to the quiet mountains.

I like coming back to places, it brings back memories and it somehow shows a personal development. In terms of hiking(skills), but also my attitude, growth, confidence. Stuff like that. I’m thankful for being here. For being able to be here. And for bringing extra water, so I didn’t have to buy the overpriced bottles at the hut ;-).

Red landslide, pretty impressive. And kind of beautiful. Officially this part of the route is closed, but it is possible to hike around it. That’s what I did. It felt safe at that moment. About an hour later though, I heard a lot of noise. I mean, really looooot of noise. It was an huge rockfall and it went on and on. That scared me. Not much later a helicopter flew around the area.

I packed my stuff and hurried to the valley. That night there was a storm. A big storm. Not far from where I camped, half a mountain came down. Ok, that’s a little exaggerated, but there has been an enormous rockfall-landslide-stone-avalanche or whatever you call it that covers the road to Dobacio for at least half a kilometre. Very very impressive. This is nature. Unbelievably strong nature. So, next time when a hiking trail is closed, I probably take the detour.

Oh, what a night. I don’t really like storms, especially the lightnings give me the shivers, but I’m usually not afraid. Until this night I was. Lightning, thunder, rain, wind. Non stop. Full on. Party time in the mountains, for sure. At one point my tent seem to be floating, that actually scared me the most. So much water! Without giving it a second thought, I packed the necessary things and run away. The rest of the night I’ve been hiding in a cave. Really, that’s how bad it was. (This photo was taken before the storm.) 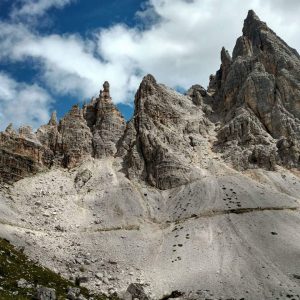 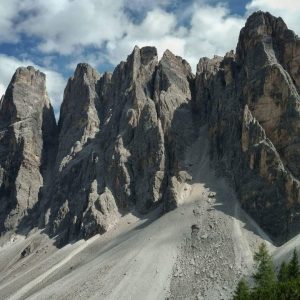 Just like every other day I try to find a balance between hiking and writing. Between being here and being in my head. Hiking is a process, just like writing. It does go very well together, but I have to confess that it happens that the stories I want to tell, distract me from the path I’m on. The stories form themselves when I hike, but at the same time it makes me forget about where I am at that moment. So, the balance. That’s a challenge.

On hiking trails like this one, there’s no space for pondering. You have to watch every step. That might sound scary, but it feels great. The focus. The elements. The trail. Forget about everything, just keep on going.

21.07.2017: “Today you’ll leave the big mountains behind. It’s only getting flatter, until Triglav, the Dolomites of Slovenia.” Austrians don’t know what flat is. I mean, yes it’s not steep and yes, there’s no snow, but I’m still on 2000meters. That can’t be flat. Can it? Not for a Dutch girl. 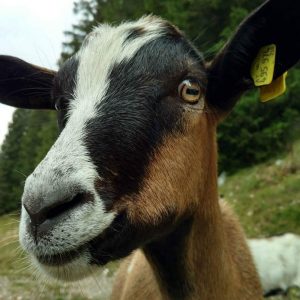 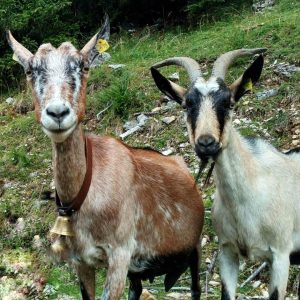 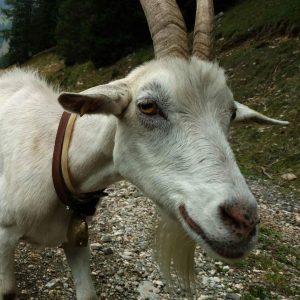 Got some new followers 🙂

I’m heading towards the 3000 kilometres and still hiking on my FiveFingers. “Are they any good?” people often ask, especially now I taped them. “Oh yes they are!” They’re good and they’re fun.

The fabric between the toes is the weakest, so I use duck tape to keep my toes inside, but soles are strong. Thin, but strong. I’m surprised how long they last. Not only did I hike many many miles, the terrain is rough and super diverse. I never have any problems with that. And even now they are really really used and indeed falling apart, they keep me going.

Hopefully I (we) make it to Sarajevo (still about a 1000K to go) and if not, I’ll have to continue barefoot 😉 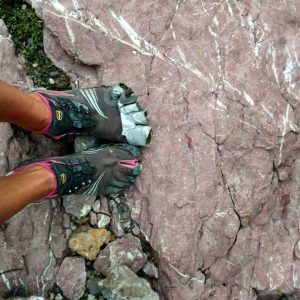 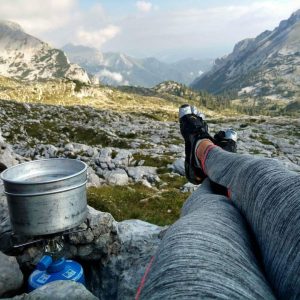 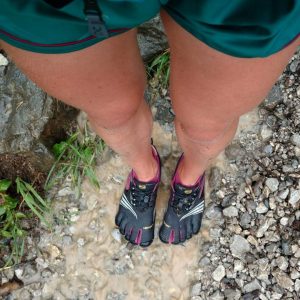 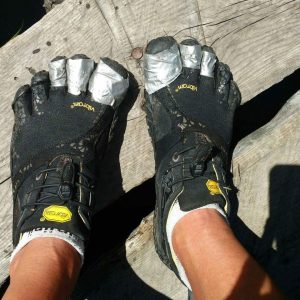 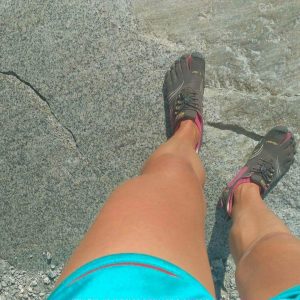 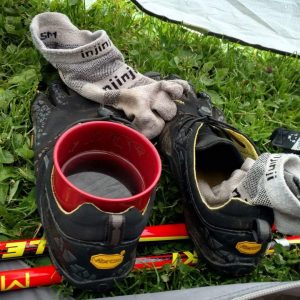 I decided to hike half days, even now the weather is good. Great actually. After a certain time, a strange tiredness kicks in, I had that several times this trip. It’s not physically or a one night bad sleep kind of tiredness. I think it has to do with being busy all day, experiencing new things every day. Meeting people, watching the weather, finding the path. Finding your way. And so, hiking half days gives me a bit of rest. Rest and time to sit, soak up and to give all the impressions a place.

Last bit of the Karnischer Höhenweg, I’m gonna miss the cows! They have been my side everything single day. Always eating, moehhhh-ing and klingeling. Rain, sun, wind, hail, thunder. They are there. So, here’s one more cow shot. Just because.