Super super green hiking trail through Croatia. From the Slovenian border to the Bosnian border. Most well known National Park on the trail is Plitvice, but my favourite part of the trail are the forests of Gorski Kotar. This tour is part of my hike from Amsterdam to Sarajevo in 2017.  Complete list with day stages: Walking from Amsterdam to Sarajevo.

All of the sudden the summer stopped. Apparently it has been very hot and dry when I was in the Alps. Now it’s cold and wet. Just like last time when I was in Gorski Kotar. “You should come during the summer,” yes I know and I certainly will. Because it is beautiful here. And pretty wild. A bit rough though. I’m impressed by those forests, they’re endless. Again the trees starting to turn orange. And red and yellow. I’m all alone. I mean, no other hikers. It’s kind of magical. The clouds, the trees. So quiet.

For now, the Via Dinarica Green Trail in Croatia has a few road sections. They suggest to take a bike, but I have no clue how to organise that ánd I have to admit that I don’t mind a few paved parts. You see a different side of the region. I mean the forest is great and the views from the mountains are brilliant, but walking through the villages in the valleys gives you a different perspective. In every possible way.

“We’re almost there. No really, it can’t be far.” First hiking day together was a long and interesting one. According to my GPS we were almost there, according to the signpost it was still 3.45 hour! How on earth can 5K take almost 4 hours?! “I think we can do it in two.” I was wrong. Hiking turned into climbing. Although that’s the sport that brought us together, scrambling up slippery rocks at the end of the day is slightly different than rocking plastic in the gym. #justonemorestep 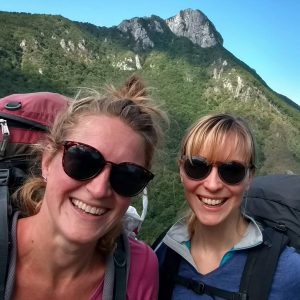 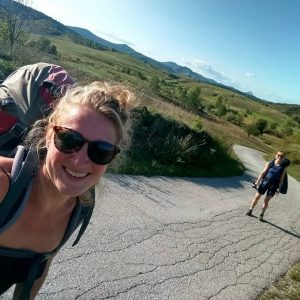 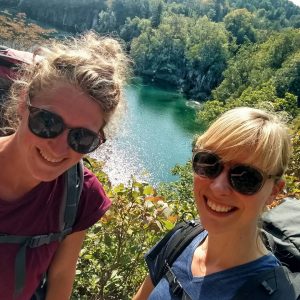 A perfect start of the the day: waiting for the sun to dry your tent while making coffee when your hiking buddy slowly wakes up (and takes a beautiful photo). Between Plaški and Plitvice the trail goes on the main road. It is probably great for cycling, but I got myself a ride :).

Some places are just indescribable beautiful. And indescribable popular. Everybody knows about the Plitvice lakes and everybody goes there. That was a reason for me not to go, plus that I’ve been there before. Until I realized that Elise, my hiking buddy who flew all the way from Amsterdam to Zagreb to join me for less than a week, had to see this place. We hiked 75 kilometres on the Via Dinarica Green Trail, saw mountains, forests, fields, rocks, rivers and even a lake, but no waterfalls. Since we were only 40km away from Plitvice National Park, we decided to put up our thumbs and got ourselves a ride. I’m so happy we did! 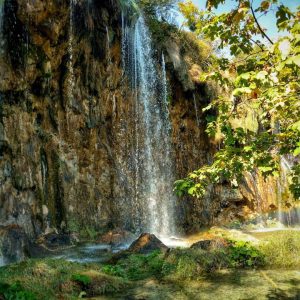 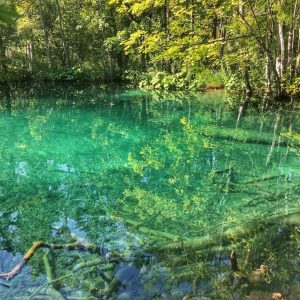 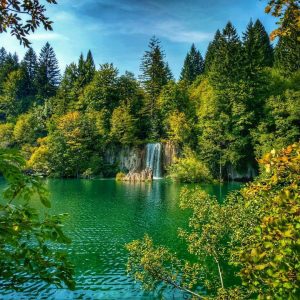 FiveFingers on the trail

“Aren’t your feet getting wet?” Uhmm, yes they do. But they also get dry. Very fast. And no, I don’t have cold feet. It’s funny, my feet are often the warmest part of my body. In the evening when cooking a meal, I’m often wearing my down jacket, buff, gloves while my feet are still naked. Also, instead of wearing socks during cold nights, I have to open my sleeping bag at the bottom so I can put my feet outside. Strange, but true. Walking barefoot or barefoot style makes you use every single muscle in your feet, which means they get strong, but also warm.