Visit When I was hiking in Una National Park (September 2017), the Via Dinarica Green Trail in Bosnia and Herzegovina did not really exist yet. I roughly had an idea of the route I wanted to follow from Bihać to Sarajevo, but couldn’t get much information about an actual trail. When I write this post (May 2019) the Green Trail still isn’t officially there, however, all stages that are completed will be automatically available on trail.viadinarica.com.

The Via Dinarica Green Trail is a hiking and/or biking trail in progress. A green carpet that meanders through the lower mountains of the Dinaric Alps, a little North of the Via Dinarica White Trail. For more information about the three Via Dinarica routes, have a look at my Via Dinarica Trail page or visit viadinarica.com.

This blog post is describing my version of the Via Dinarica Green Trail in Bosnia and Herzegovina. Besides the usual trail notes and thoughts, I added practical information, hoping to help future Green Trail hikers. General practical information about the Via Dinarica trails you can find on this page. In my Outdooractive tours (added to this blog post) you can find specific information about resupply, water sources and other facilities along the trail.

In 2008 Una National Park became the third National Park in Bosnia and Herzegovina. It is located around the Unac and the upper Una river with Kulen Vakuf as its main town. The main aim of Una National Park is to preserve its unique eco-systems and to develop sustainable eco-tourism. Waterfalls and white water rapids, crystal clear water and crazy green forests. The Via Dinarica Green Trail connects it all, by bike, on foot or – and this is probably the best way – by boat.

A few kilometres before the border between Croatia and Bosnia and Herzegovina, a police car stopped me and asked me for my papers. Of course there aren’t many tourists crossing the border on foot, but until they – the police – saw that I indeed was the Dutch tourist I claimed to be, they treated me as if I had done something wrong. Perhaps this is because of the situation with refugees around Bihać. Many people try to leave Bosnia and Herzegovina through the mountains, hoping to reach Croatia. This makes it a bit awkward to hike here for fun, but not unsafe or undo-able.

Unfortunately it’s unavoidable to hike the main road when you come from Ličko Petrovo Selo, the Croatian Green Trail, if you want to pass the border checkpoint. Even if there would be a (official) hiking trail through the mountains, now is not the right time, if you ask me.  Other than that, nothing unusual happened. For me it weren’t people giving me problems, but the dogs.

As soon as I crossed the border, the party started. Hungry stray dogs aggressively barked wherever I passed by. Ignore, ignore, ignore. But those dogs scare me, especially when they’re in groups and run towards you. Often people helped me to chase them away, but I can’t say it was a pleasant walk. A dazer – handheld ultrasonic dog deterrent device – can make the difference. Dogs don’t like this sound and usually immediately stop barking/running/attacking. It’s totally harmless, but pretty efficient. In Bihać I unfortunately came to the conclusion that mine didn’t work any more.

Aside from my fear of dogs, the long road walk and the tensed refugee situation, I still felt excited to be back in Bosnia and Herzegovina. In 2015 I biked from Velika Kladuša to Bihač and further on to Martin Brod and Drvar, but saw Una National Park only from the road. This time I had the chance to explore this crazy green wilderness on foot. Where I skipped most of the sightseeing sights three years ago, I now had plenty of time to visit and revisit all of them and do some proper hiking in Una National Park. 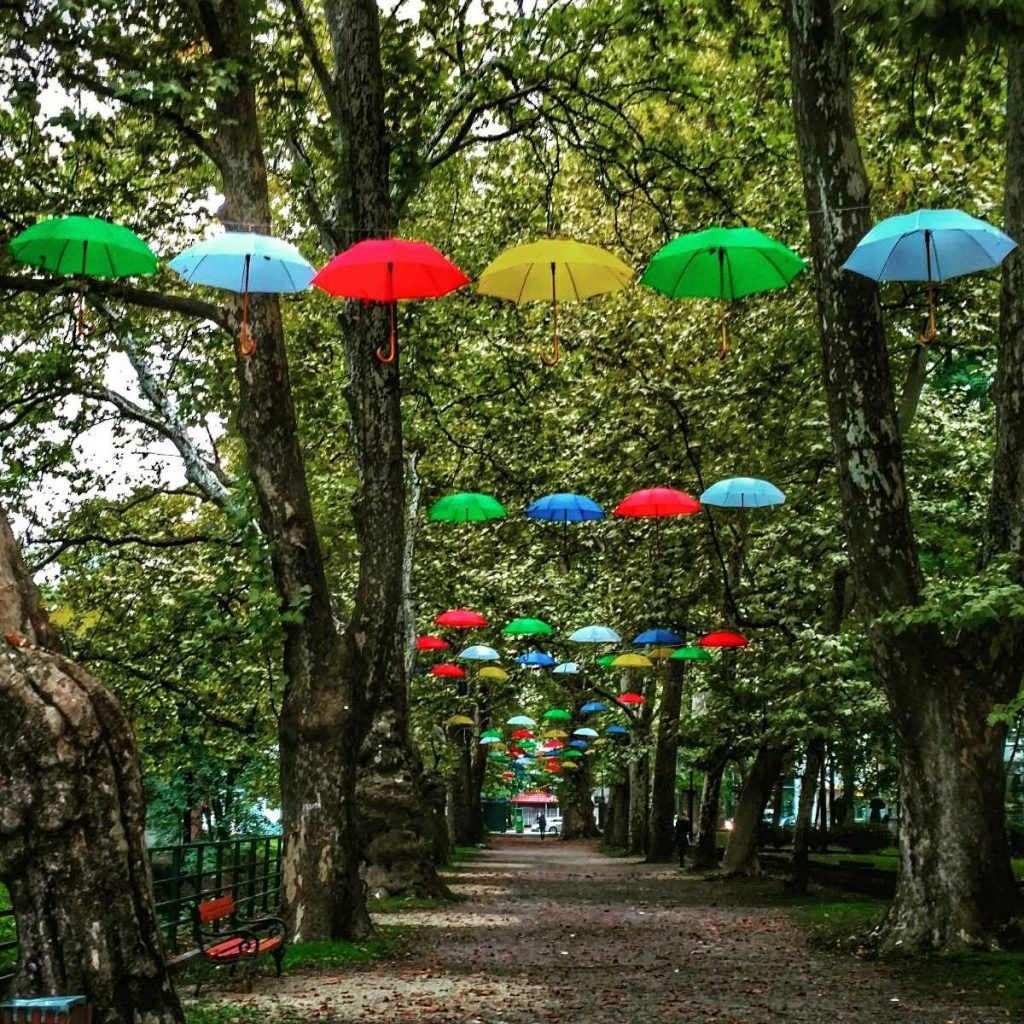 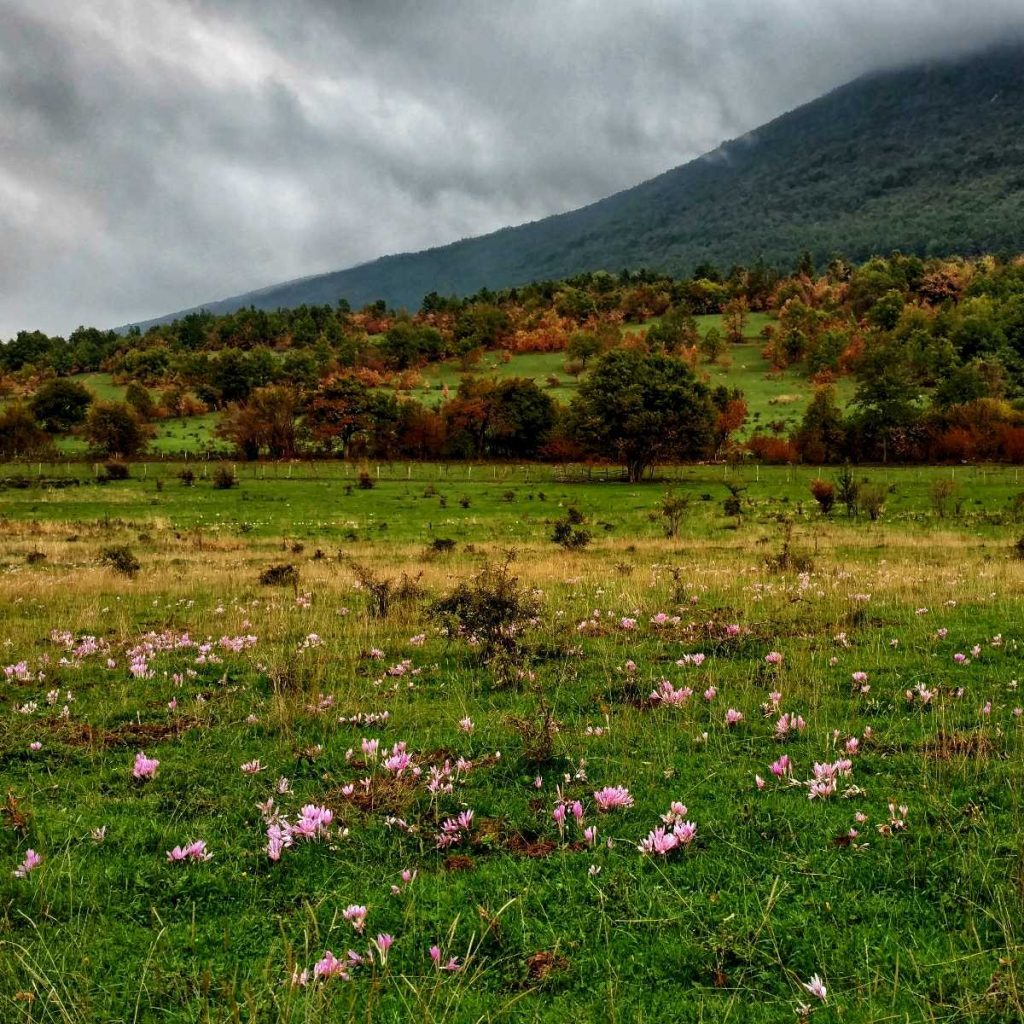 Along the educational trail

From the border close to Izačić I followed a bunch of small roads towards Bihać, camped at a closed rafting camp in Pecikovici and continued the next day towards Ripač. Somehow I thought it would be possible to cross the Una river near a village named Lohovo and pick up a hiking trail into Una National Park. I was wrong. There was no bridge and most likely also no hiking trail all the way to Štrbački buk. It must be spectacular if you can follow the Una river, but for now that’s only possible by boat. Rafting. Unfortunately upstream rafting wasn’t an option and thus another road hike awaited me. Or a bus.

About nine kilometres after Ripač I reached the main entrance to Una National Park, entrance No. 1. Perhaps it gets pretty busy during high season, but on this rainy day in September there was nobody but me. And a pack of dogs. As soon as the dogs noticed me, they started to growl. From every direction their buddies immediately came to bark and growl along. I’m easily scared if it comes to dogs, but usually I at least try to face my fears. Now I turned around and went back to the road.

Shortly before Ćukovi (about eight kilometres further on the road) there’s another entrance, entrance No. 2. On my GPS I saw an educational theme trail named “Along the Paths of Past” to Štrbački buk, the waterfall in Una National Park. Some say this is the most beautiful route to Štrbački buk. I don’t know about the other route, but this educational trail surely made up for the endless road hikes and scary confrontations with dogs. Yes, Una National Park is definitely worth a little extra effort, trust me.

From Štrbački buk you basically follow the Una river until the road bends to the right, to Orašac. After Orašac there’s only one way to Kulen Vakuf, the road. Although I definitely prefer biking roads like this, it wasn’t that unpleasant. After two kilometres the sun showed up, one kilometre further I had to peel off three layers and when I reached Kulen Vakuf I could treat myself to a cup of coffee on a sunny terrace at the riverside.

After two crazy long, cold and wet days I decided to spend an extra night in Kulen Vakuf. There are a few nice sight-seeing-sights like the medieval fortress of Ostrovica, the remnants of the old burg of Havala and the Sultan Ahmed Mosque.

Kulen Vakuf area has an interesting history, before the Ottomans and the Austro-Hungarian Empire came, the medieval burg of Ostrovica was the most strongly fortified burg in the region. Even though Kulen Vakuf has been destroyed by fires and wars more than once, recent reconstructions of the mosque has been done according to the original building plans. I remembered Kulen Vakuf as a quiet but cosy, beautifully located town. I remembered it right. There’s a pleasant atmosphere, exactly what I needed after those rainy grey days.

One of the highlights in Una National Park are the cascades in Martin Brod. At the campsite in Kulen Vakuf I met a Slovenian guy who planned to go there the next day. Happily I hopped on and explored Martin Brod like real tourists do, without an enormous backpack. During the season it’s possible to book a kayak tour from Martin Brod to Kulen Vakuf, definitely more interesting than driving or hiking the road, but as I was there in October I literally missed the boat.

Because I wasn’t sure about the route from Martin Brod towards Klekovača, I went back to Kulen Vakuf where I continued (with an huge detour) to Vrtoće. A few weeks later I found one hiking trail and two mountain bike trails on Outdooractive. Maybe I will come back another time. 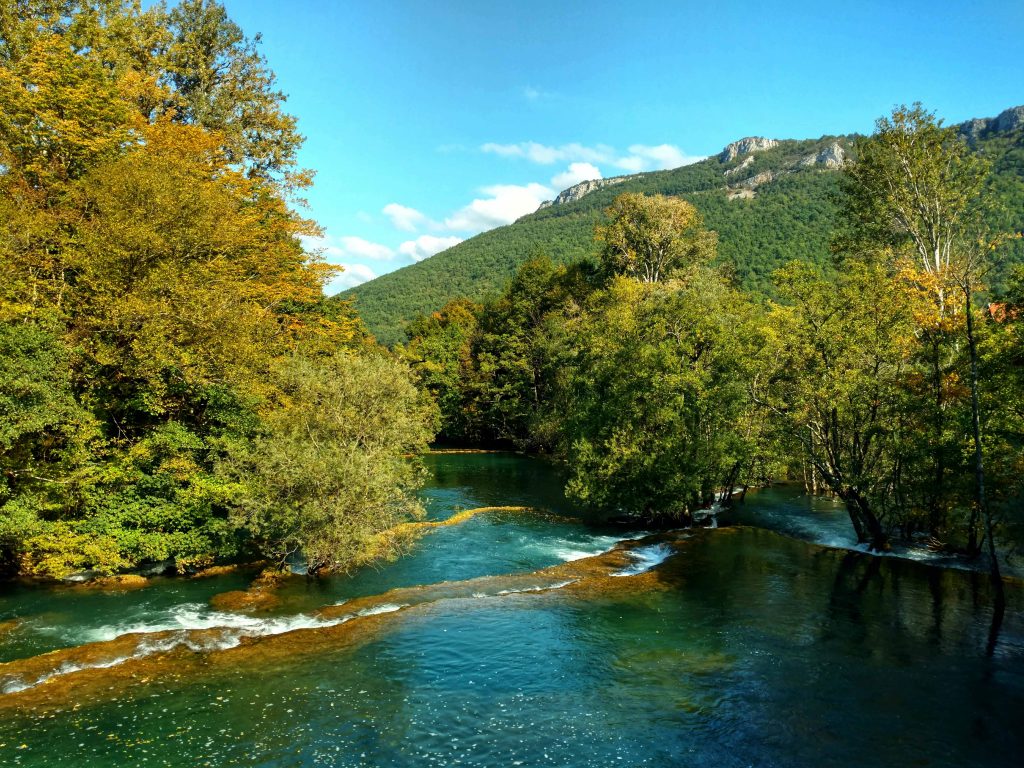 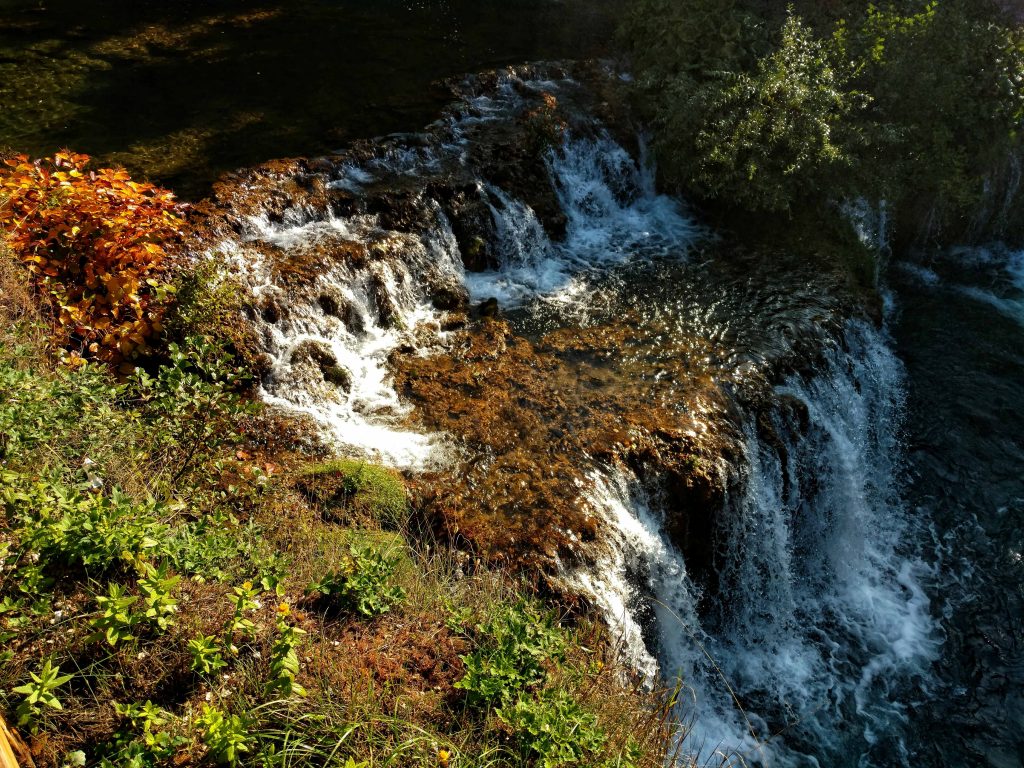 Around Bihać and Ripač there are several campsites (open until October) and of course you can find accommodation in the Bihać itself. During the weekend it is also possible to sleep in mountain hut Pljesevica on Osječenica mountain. In Una National Park, next to entrance No. 3 close to Štrbački buk, is a basic campsite where you can put up your tent for only a few Euro’s. Kulen Vakuf has a guesthouse, but as in every town that attracts tourists it’s easy to find a (private) apartment or room. I stayed at Auto Kamp LAV where I could sleep in a little caravan.