Although it’s very efficient to send your packages by bus instead of using the regular post service, travelling by bus can be challenging in Croatia. To avoid a long, complicated (maybe impossible) bus ride from Zagreb to Buško jezero, I decided to start hiking in Knin. I wanted to cross Dinara, Troglav and Kamešnica all the way through the mountains. The difficult logistics with public transport is more or less part of the adventure, but I would deal with that on my way back, I thought. That this relatively simple bus ride from Zagreb to Knin turned into a scandal is a sad, but unfortunately true story.

On my way to Knin

From Zagreb there’s a direct bus connection to Knin. I took this bus twice before, a nice 4-5 hour ride from A to B. Nothing complicated. My roommate was quite surprised and double checked it for me. He had to admit that I was right. The next morning he dropped me off at  the bus station, took me to the bus and checked again. Yep, I got the bus to Knin.

After a few hours the bus stopped. It didn’t look like a bus station, but new passengers got on board, so it might have been one. I first thought that there was something wrong with the bus the new passengers came from and that that was the reason why it suddenly got so crowded. Why are all those people going to Knin? I wondered. The bus driver kept on shouting “Skradin, Knin, Skradin, Knin” so I guessed the new passengers new where they were going.

The bus took the scenic route, weird because it was longer, but hey I won’t complain. I could say hi to Velebit, greeted Paklenica and for one second I thought of getting off there to hike from Paklenica to Sveto Brdo, Tulove Grede, Crnopac and then hitchhike to Knin. But I didn’t. I stayed on the bus. The bus that strangely enough drove by the turn to Knin. Why on earth would the bus continue along the coast? Perhaps because this other bus where the new passengers came from was supposed to go along the coast, but for some reason couldn’t. Perhaps that we therefor had to make a detour. Who knows. You never know.

When the bus drove towards the toll-gates and start to turn around, I had to ask. “What is going on here? Is this normal?” It was then that I found out that this was normal, but that the bus was heading to Split. Damn. “Where are you going?” the girl next to me asked. “To Knin.” She frowned. “But then you had to transfer to another bus a while ago.” “Oh. Really? Well, then I guess I’m going to Split.” There must be a bus from Split to Knin, I hoped.

At first I didn’t worry at all. It was stupid, but it was a miscommunication. The bus driver most likely could tell me which bus to take back and then the only thing I’d lost was time. The girl next to me explained my situation to the bus driver and I think she asked if he could help me get a bus back. I’m not sure. I’m not sure at all what happened then, but the things the bus driver said were everything but friendly. Nobody wanted to translate, “you don’t want to know what he’s saying.”

The situation went on and on. People were looking, frowning, surprised and angry. I felt stupid, but at the same time, I really had no clue that I had to change buses. If only I had known. After a long tirade of the two bus drivers, one driver started to call his colleges and arranged a bus back for me. All good after all. I did not like the way they treated me. I’ve been yelled at like I was an animal. Stupid tourists don’t need to be treated as human beings. It was humiliating, but well, those bus drivers probably have to deal with a lot of shit. Anyways, I got on another bus.

That other bus dropped me at Skradin. No instructions. I asked (in Croatian) “does the bus to Knin come here?” “Da.” “What time?” He didn’t know, 2 or 3 hours. Aha. And off he went. No timetables, no information, nothing. Another bus came, I asked that driver. He didn’t know neither. “There’s a bus to Knin in the morning.” “Yeah, I know, I was supposed to be on that one.” Internet didn’t help. At the restaurant nearby nobody knew. All we could find was that the next day there would be another bus.

What to do? Trust the bus driver who sort of told me that I had to wait 2 or 3 hours or accept the ride to Šibenik I got in the meantime. I choose the latter. In Šibenik I had to buy a new ticket for another bus, because Croatia Bus doesn’t operate from Šibenik. There are several bus companies who work independently. Even if they ride the same route, your ticket is not valuable if it’s not from the right company. It’s an annoying system, but I couldn’t blame this second bus company. This is how it works and they couldn’t help that Croatia Bus messed up.

Somewhere after 5PM I arrived in Knin. Five hours later than planned, but hey I finally could start hiking. Let it go. I Spend 12 days without internet or cell phone reception in the mountains. What a bless!

Luck and lack of luck

When I arrived at Buško jezero I bumped into a group of bikers who were about to go back to Zagreb. I got a seat in a super slow (sorry Mario), but super nice camper van. Mario drove me all the way to Zagreb, to my front door to be precise. Thanks again! It seems to me that luck and lack of luck or bad luck tend to pile up. You get it all on one plate. Not sure if I agree with that, but it is what it is. Right?

Back home I told my roommate how I got a ride back and how the bus ride two weeks ago had turned into a catastrophic journey after all. He was surprised, because he heard my story before. He read it before. I couldn’t believe it. Two students on that bus were so angry that they wrote to the newspaper. It was a scandal how the drivers had treated me, they felt ashamed. And on top op that, it isn’t exactly the first time that things like this happen with bus drivers.

I think I’m happy that I did not understand what those drivers said, what they called me and what they planned to do. I think that if I heard that they wanted to drop me in the middle of nowhere (Dugo Polje), because I had no ticket to Split, I would have gone mad. Although I do not fully recognize my behaviour in the article, I’ve learned from previous experience that things might be a little exaggerated to make the point. At least they didn’t call me a middle aged lady, like the Bosnian newspaper did two years ago.

Nevertheless, I’m happy that those students stood up. It’s not about the miscommunication, who was right or wrong, who should have or shouldn’t have, but it’s about how we people treat each other. How those bus drivers treated me and perhaps others as well. This was not OK. I’m glad that I could easily let it go, but it is really really not OK.

When I first got of that bus and had to buy another ticket, I wanted to write a complaint letter. After two weeks hiking that thought went away, until now. Of course I want to try to get my money back, because they failed to get me on my destination, but most of all I want to write a letter because of the behaviour of the drivers. I just hope that in the end it dóés matter when people speak and stand up. If those students did, I feel I have to do so as well.

I might need some help with this letter, but let this blog post be the first step.

Here’s the link to the online article 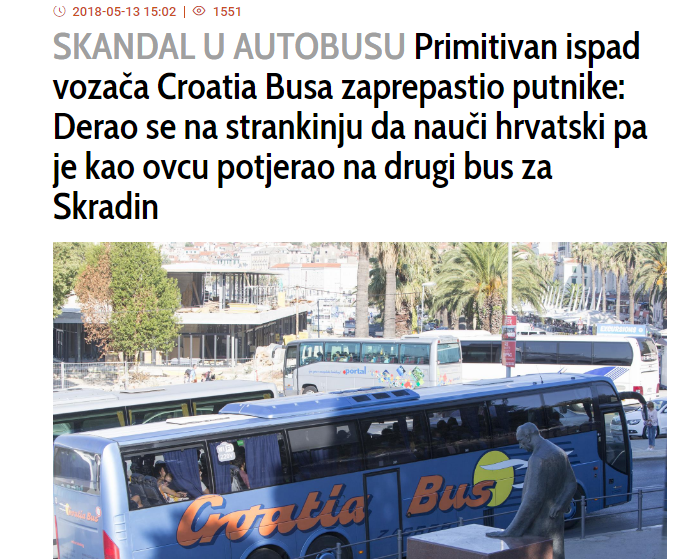