It has been over a month since my last update, but before I move on to new stories, I’d like to write the third part of my “Trebević Tales” series, the episode where we got snowed in. Or snowed out actually. Anyhow. Let me see, I think my last update stopped somewhere on the way down. Down to town. Yes. After almost two weeks on Trebević mountain I desperately needed a shower – wash and brush my hair, that kind of stuff. So, together with Sabina and Dado (regular customer and friend of the hut) I made my way through the snow towards the city. Sarajevo city.

In Sarajevo I met up with Terhi, an adventurous girl from Finland. Terhi contacted me just before New Year’s Eve hoping I could help her finding information about hiking near Sarajevo. I suggested her to come up to Jure Franko hut where it was not only me, but also Sabina and a bunch of other outdoor lovers to help her out. Terhi and her friend Johanna came, went for a night hike to Trebević peak, joined our party afterwards and left the next day for one week filled with Bosnian winter adventure. (Here’s the story on Terhi’s blog) Unfortunately we didn’t spend much time together, but luckily she came back to Sarajevo. Now it was my turn to pay her a visit. And so I did. 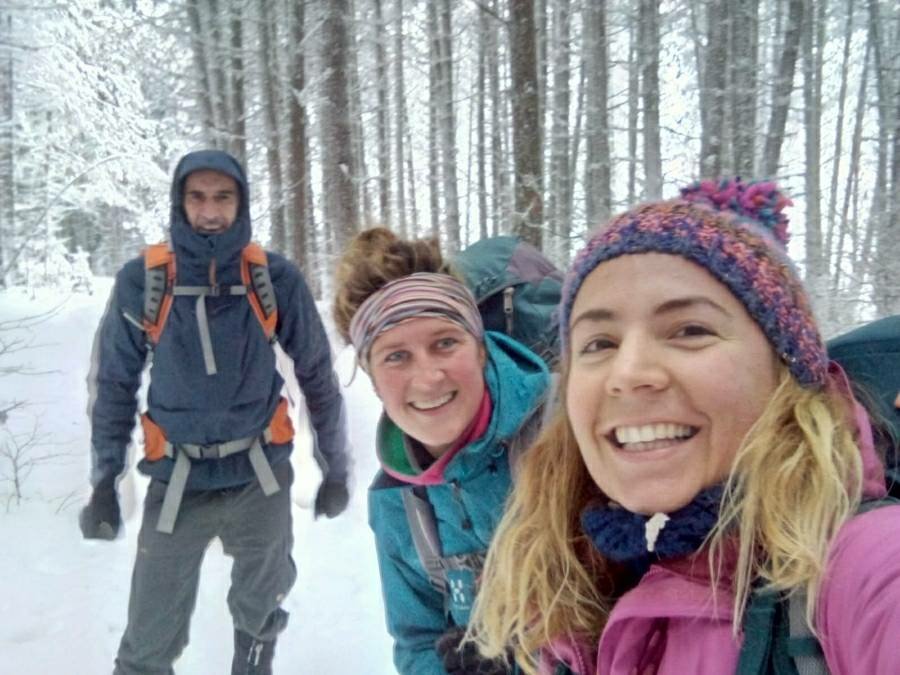 Hiking down to town 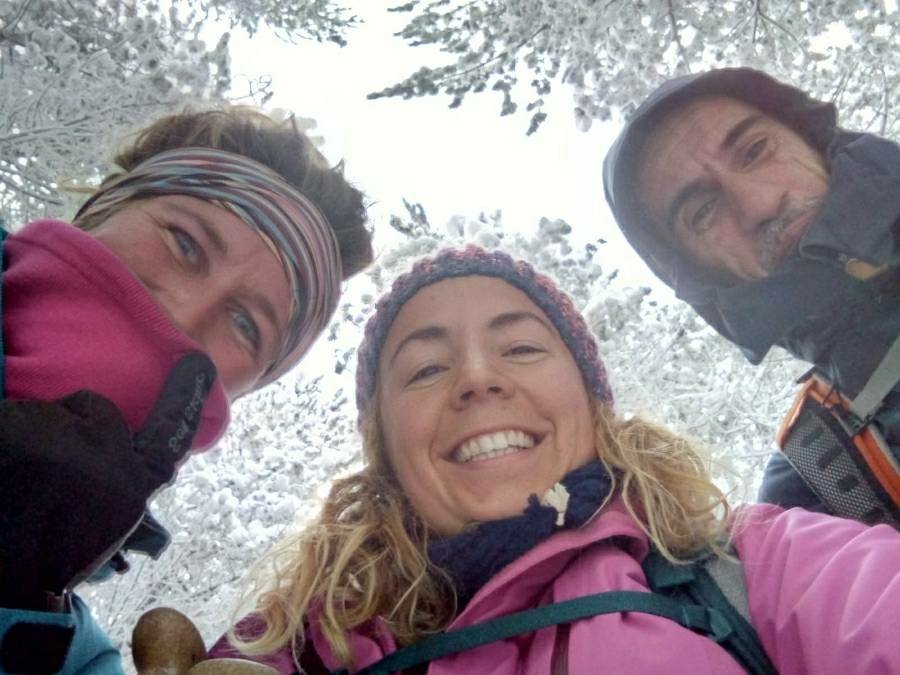 Besides being adventurous Terhi is also someone who likes to travel slow. “It’s not about the adrenaline, it’s the endorfine.” I can totally relate to that. Just like many other things she said. It was as if I heard myself thinking. She said that she expected us to talk about the practicalities of hiking, about gear, routes, locations, but all our conversations turned out to be about life and how we live it. It doesn’t happen often that I meet someone with the same mindstyle. When meeting a soulmate I feel super inspired and thankful, but strangely also a bit sad. It seems to point out the one thing that can make me feel so lonely: not being understood. And sadly that happens quite a lot. If not most of the time when I meet people. They are super sweet and generous, but far from like-minded. I always have to explain or even worse, defend myself.

“We don’t exist unless there is someone who can see us existing, what we say has no meaning until someone can understand,  (…) their knowledge and care for us have the power to pull us from our numbness. In small comments, many of them teasing, they reveal the know our foibles and accept them and so, in return, accept that we have a place in the world. We can ask them ‘Isn’t he frightening?’ or ‘Do you ever feel that…’ and be understood rather than encounter the puzzled ‘No, not particularly’ – which can make us feel, even in company, as lonely as polar explorers.” ~ Alain de Botton, The Consolations of Philosophy

I’m not sure if I completely agree with Epicurus’ philosophy, because I truly love being alone and I most certainly nééd time alone, but I do admit that it was a relief to meet Terhi who wanders and wonders the way I do. Where feeling lonely while being among lots of people can make me feel terrible, sharing a tiny space with one person and still have the alone-time-feeling makes me super happy.  It’s something special. Sharing a tiny space with one person and nót having any alone time on the other hand, makes me feel claustrophobic like crazy. Guess that’s where the introvert in me feels trapped.

Something I keep on forgetting is that in Sarajevo the places with the best ćevapi don’t serve alcohol. I’m not much of a meet-eater, but when I do – especially when it’s from the grill – I love to drink a beer with it. On Baščaršija you have to choose. Beer of  ćevapi. We chose to leave the ćevapi for another day and went to “Barhana” for dinner.

The next day Terhi prepared a delicious Finnish breakfast, it covered the whole table. She even baked bread with her own “grown” dough. Wow! Second half of the day we walked a little city walk with the White Fortress (Bijela Tabija) as our “destination”. I enjoy strolling through the streets of Sarajevo perhaps even more than visiting the points of interest. This city is made for strolling. It’s fantastic how the steep narrow streets take you to a completely different world. Within only a few minutes from the main street you wouldn’t say you’re in the capital city. Therefore it wasn’t much of a disappointment that Bijela Tabija was closed. We had the view, the walk and a nice long long talk.

When I’m in Sarajevo I’d like to do (some of) the things you HAVE to do in Sarajevo. Drinking traditional Bosnian coffee is one of them. In Baščaršija there are heaps of cute little caffe bars or kafana’s, they all probably serve good coffee, but unfortunately most of them are very smokey. Since we were planning to combine drinking coffee with getting some work done (emailing etc.), we would probably spend a few hours at the caffe and thus non-smoking it had to be. We found “Ministry of Cejf” next to the famous “Čajdžinica Džirlo” where we slowly sipped our coffee until it was time for beer and dinner again. Burek. Yes, I know you have to drink yogurt with burek instead of beer, but hey, burek and beer is not bad neither. 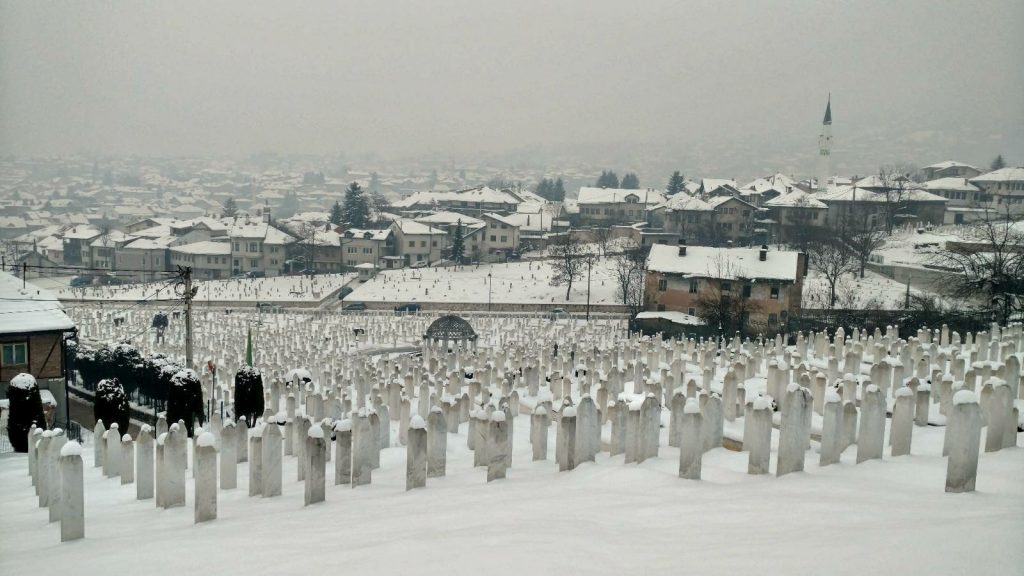 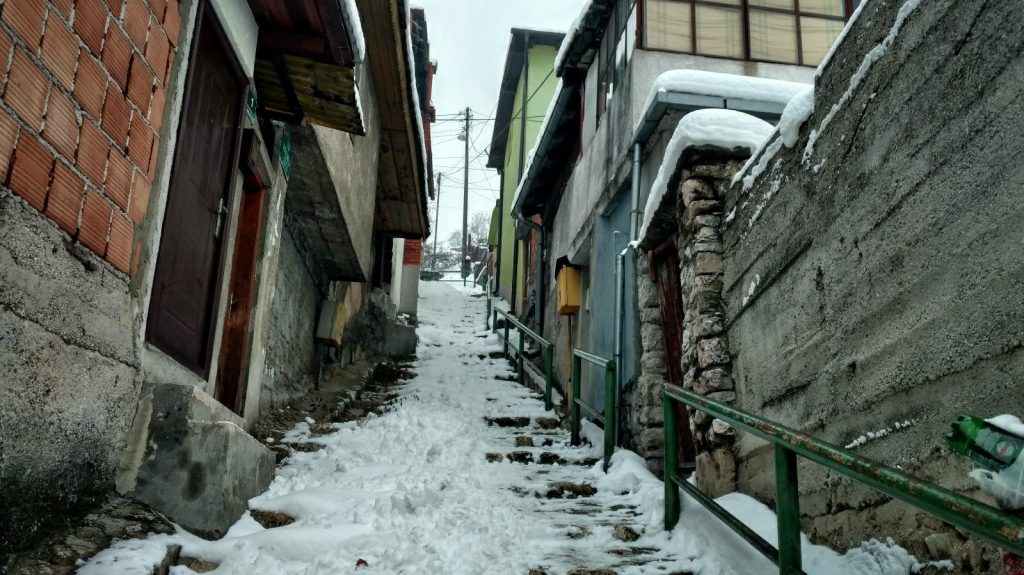 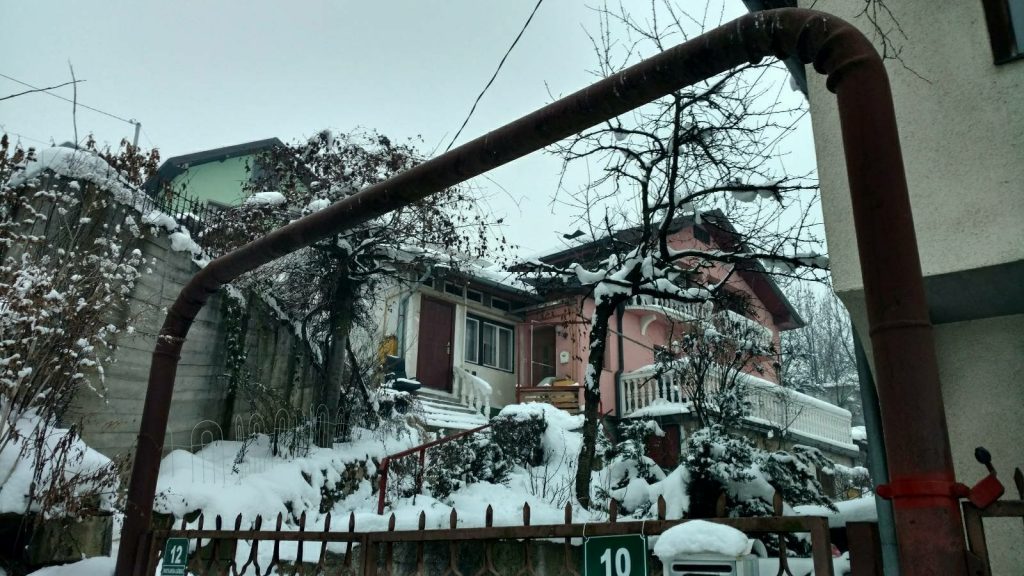 Away from the main streets 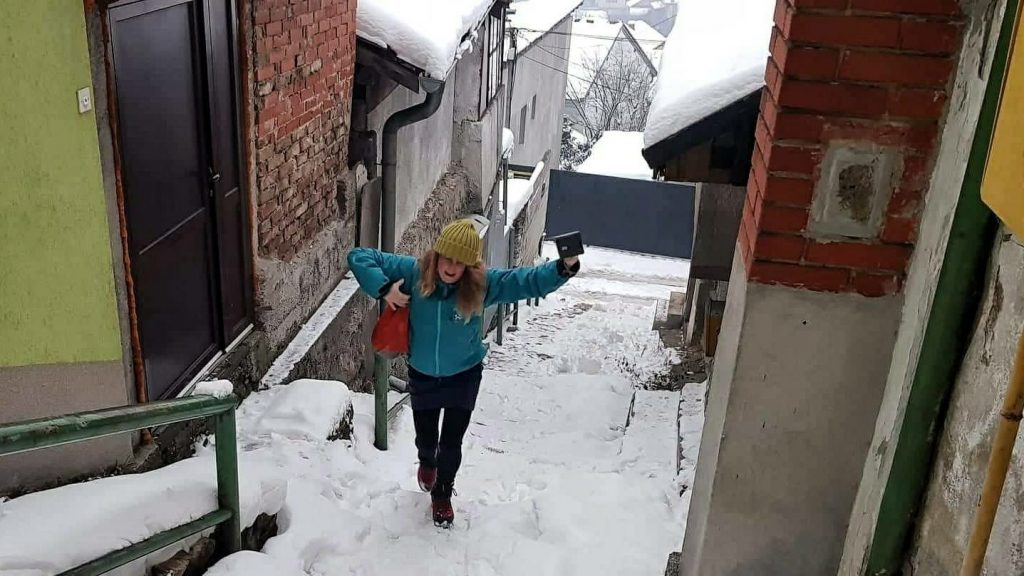 On the way back up to Jure Franko hut I got company from Marjolein, a Dutch girl who’s favorite city is Sarajevo. A while ago Marjolein contacted about an article about slow traveling. Unfortunately we weren’t able to meet at that time, but we stayed in touch in case our paths would cross again. In January she was in Sarajevo for work, but could take the afternoon off to join me for a hike. Although I felt a little nervous about the days being so short – and to hike from town all the way to the hut you need around 4 hours – I agreed on meeting at 14.00. Together we walked to the viewpoint near the cable car station on Trebević. It snowed and we didn’t have view, but it was a pleasant hike. It’s felt good to be out there in real snowy winter weather and it was great to finally meet Marjolein.

By the time I reached Pino hotel it started to get dark already. From Jure Franko down to Pino hotel takes about one hour, but up I surely needed two, if not three. You hiked this before, I told myself. You know the way. I gave it a go. The further I got, the thicker the snow piled up. Duhhh, it’s a mountain. It costed me way more energy than usual, the fresh snow made me go incredibly slow. I had to face, I didn’t feel comfortable. Damn.

Back at hotel Pino I called Primož, the owner of the hut. The idea was to pick me up with the jeep, but apparently the snow-situation at Jure Franko was pretty bad. It took Primož almost two hours to reach me. There was no way we could make it to the hut, the snow was too powdery and there was simply too much of it. Down to town was the only option. Damn again. The only good thing about being snowed in (out) and sleeping another night in town was the luxury of taking a shower. As usual I put on too many clothes when hiking up and as usual I was too lazy to take them off. Also wearing GoreTex doesn’t really help not to sweat, my oh my. 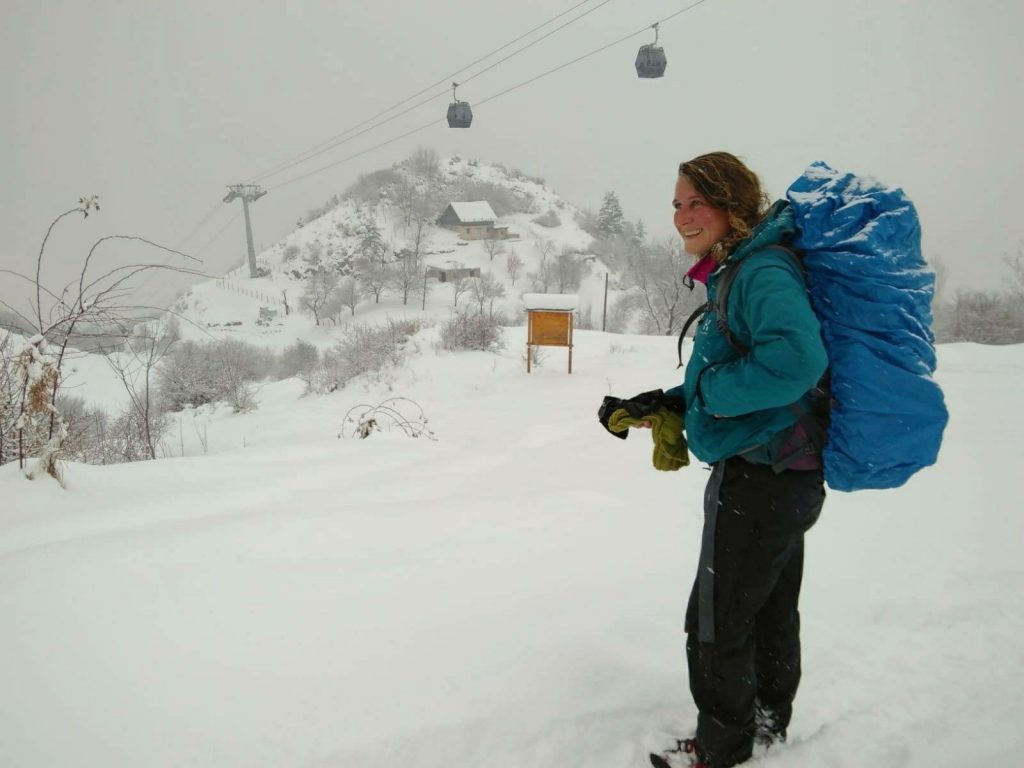 Under the cable car 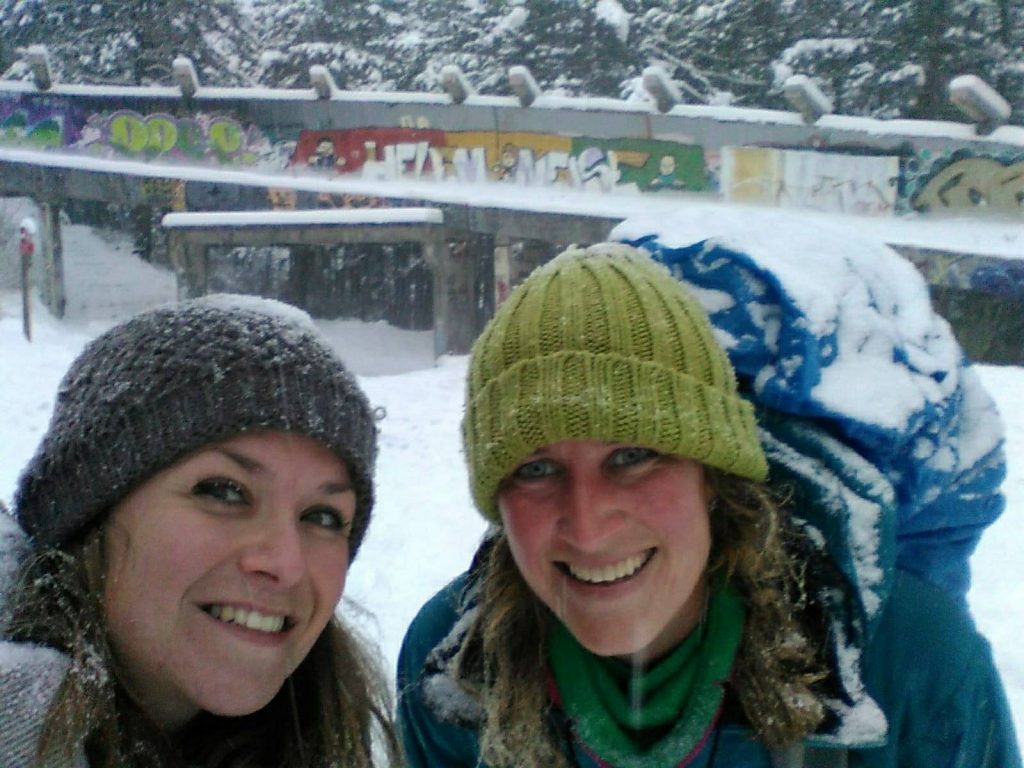 At the bobsled track

The jeep made it

New day, new chances. Luckily the jeep made it almost the entire way to the hut. A hell of a ride though, the jeep constantly slept away and digged itself in even with the super heavy snow chains. And oh man, what a hassle to put on those snow chains! At the end we had to walk a little, but at least not all the way. That would have been a disaster, because there’s no running water at the hut. It would take hours and hours to walk to the village, fill water and walk back with a super heavy backpacks. Melting snow would in that case be the easier option. But no stress, the jeep made it. Now fingers crossed for no more heavy snowfall.

A few days later it was my birthday, time to go for a birthday beer with some friends. In town. Although I didn’t mind walking, Primož came along as well so we could take the jeep. Sabina found a great pub in an old cinema where it’s not too crowded, noisy or smokey and where’s good craft beer. No, I’m not demanding at all. The Brew Imperijal Society was exactly what I was hoping for. In the Netherlands there’s more craft beer than there’s water, the amount of different beers is truly overwhelming, but in Sarajevo it’s more of a new thing. Not entirely new, but at least supermarkets don’t have two, three or four allies full with overpriced hipster beer. This Brew Imperijal pub-place-thing had enough choice to suit everyone’s taste and still made it possible to distinguish one beer from the other. Loved it.

A little less lovely was the ride back to the hut. If it was up to me, I would have slept at a friends place in Sarajevo, and go back the next day, but Primož needed me in the hut in the morning. The weekends are the busiest and since I was at the hut as a volunteer, I couldn’t really take one of the two real working days off. Makes sense. What didn’t make sense to me was filling up the water tanks in the middle of the night. Really? Do we HAVE to do that NOW? I love to go out at night every now and then, but I’m actually a morning person. I’d rather get up early to get things done, after midnight I’m too tired to pie, let alone to fill up water tanks. But well, what can I say?

Guess that’s part of the deal too.

Better to focus on that’s what’s nice, right? And my birthday was nice. Super nice.