Here I am again, back on my blog and I got another (by the time I post it) old update for you. Here’s the fourth and last part of my Trebević work-away adventure: Trebević Tales #4 “UP and DOWN”.

The second half of January

It took a while to write this post, because I wasn’t sure what to share and what not. I still don’t know, but what I do know is that I started my blog with the idea to write about what I think and feel. Share the real stuff instead of creating another picture-perfect-travel-blog. The ups and downs, the good and the bad. For some reason – or for many reasons – it’s easier to write when all is good. And although a lot was good, very good and very beautiful, during the second half of January I had a bit of a hard time.

Simply leaving out the difficult stuff is not really an option for me, it feels fake. Turning the bad into good – in a look-at-the-bright-side kind of way – didn’t feel right neither. That’s ignoring what’s going on or fooling myself. But when I feel tired or stressed or sad or misunderstood, the last thing I want is to loose myself in negativity. And annoy others with it. My solution was to leave it, let it be and take blog-break. Give it some time.

The funny thing is that I tend to remember the good and forget the bad. Ah well, maybe not forget, but after a while you put things in perspective. The bigger picture and the majority of that picture was good. As time passed I now feel that what I write corresponds with how I feel. Maybe it’s cheating, because I tell the story differently than I would have done a month ago. But does it matter? I don’t know. Anyways, here’s what happened after my birthday. 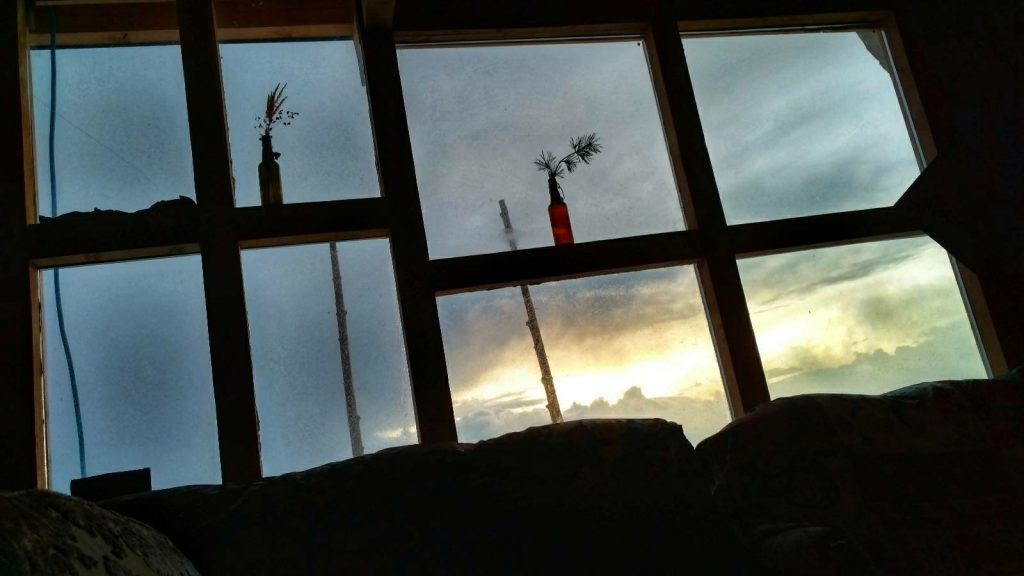 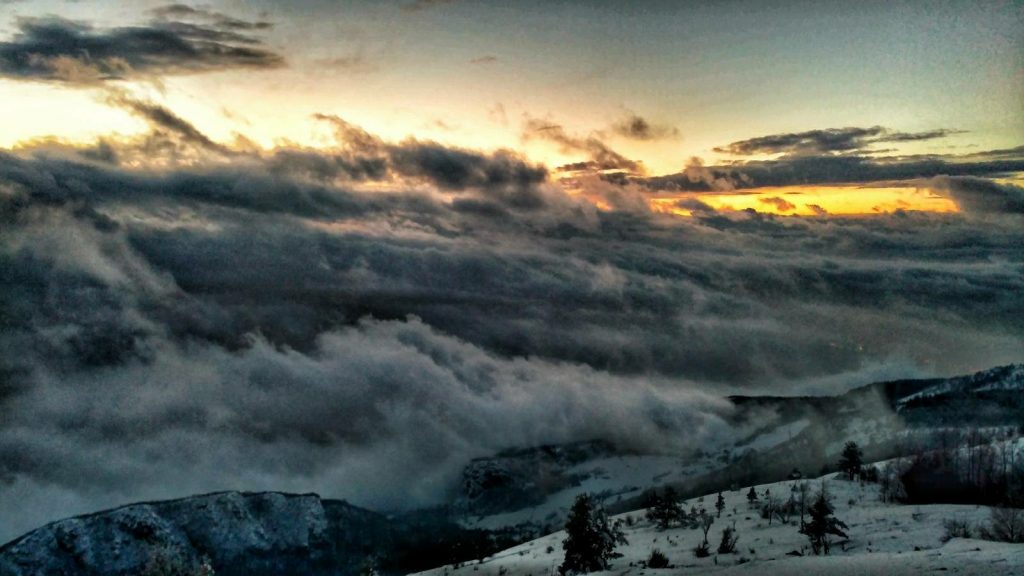 Ever since I know Sabina she’s talking about Stanari, about Green Visions’ mountain lodge on Bjelašnica. I hiked on Bjelašnica several times, but never been on the Stanari side. “You have to go there!” and so we started planning an adventure. During the quiet weekdays it would be okay to leave Jure Franko hut for a few days, there’s not that much that need to be done. Or cannot be done without me. We chose the week after my birthday. Mid January usually comes with cold temperatures and clear blue skies. Perfect for snowshoeing.

Primož, the owner of Jure Franko hut, suggested we could also go to Vranica where he has a weekend house. If it was up to me we did both, first to Stanari for a girls-hike-out and then to Vranica for a real cool snowy ridge hike. Somehow planning this multiple day adventure turned into a hell of a complicated story. Where to go and with who and how and when. It seemed so easy, but apparently it wasn’t. Tons of messages later it became clear to me that our mid-week girls-hike had to wait, we were going to Vranica with Primož. Alright. At that time I didn’t really care anymore where to go, as long as I was in the mountains with Sabina.

In the meantime life in the hut went on. The jeep couldn’t get all the way up anymore and was now parked a 30-minute walk away. Still not a major problem, but it did cost a bit more time to get water and groceries. Besides resupplying the usual day jobs kept us more or less busy. It’s unbelievable how short the winter days are.

“There are only a few things that need to be done, but somehow they almost fill the entire day. Or, as we do everything on a pretty slow pace, we magically fill the day with only a few things that needs to be done. Making fire, getting wood and keeping it running, shoveling snow, a bit of cleaning, preparing food, eating, getting water from the village and once or twice a week new supplies need to be bought.” ~ Trebević Tales #2 “Mountain Life”

I think I was hoping to find a balance, or to get used to the fact that I was not alone. Nearly never. Perhaps I was naive or too optimistic, but instead of easier it got more difficult. At first it was just a matter of privacy, not having my own room or another place where I go to be alone – other than the toilet (which was outside) – felt a bit uncomfortable. Even the times I have been living together with a boy- or close friend I had more privacy than here. Of course I could have said “Hey, I’m getting dressed, could you turn around for a second?” but that’s not enough.

There was more. I started to feel resistance of being there. Being there together. The fact that the evenings were endlessly long didn’t bother me at all, I believe the winter is here to slow you down. But spending those endlessly long evenings with someone you hardly know, was way more challenging for me than to survive the dark. These were the moments I missed my privacy the most. Privacy or alone time.

I totally envy those who can shut themselves off from everything and everyone around. Got to learn how to do that. Then I probably also got to learn how to deal with the fact that people think you’re a freak or a weirdo, or – simply accept that. Accept and let go.

It actually reminds me of the volunteer from Brasil who worked at the hut before me. He could sit all evening without making any sound, he was completely silent for hours and hours. For days. At one point I didn’t even notice him anymore. Perhaps he’s mastering the shutting-yourself-off skills like a pro. It took a while to understand his behavior, because it was indeed a bit weird. But, in the end it’s a coping style that might protect me from being over-stimulated, overwhelmed or feeling stressed I guess.

The reason – or one of the reasons – I like to be in the mountains, in nature, is the stillness. Often it’s not even quiet, wind can make a whole lot of noise, as do birds and all sorts of animals at night. It’s never completely quiet. The stillness I find in nature has more to do with tranquility. It feels quiet, I feel calm. My mind gets calm so my body and brain can recharge. The longer I can’t get to this stillness, the sooner I burn out.

The second half of January I started to feel exhausted.

I more and more craved for a real real good rest. That’s alarming when you spend your days in an pretty isolated mountain hut where’s not too much you have to do.

Then it was time to go to Vranica. That morning there was some tension in the air. I made a comment about the constantly changing plans. It was bothering me not to know what was going to happen or what I was supposed to do. I felt so terribly dependent. The number 1 ingredient for unhappiness if you ask me. Better to do something about it instead of complaining or commenting, for sure. The problem was that it felt like I could not change anything. I had to accept that things go the way they go. No control. Just sit and drink coffee. Polako. Wait and see and accept. There’s the second disastrous ingredient, feeling powerless.

Now I look back, I realize that freedom is the key-word here. I lost my privacy, the control and independence. I lost my so precious freedom.

I felt short of breath, nervous and super super tired.

On the way down to town to pick up Sabina there was a typical driver-navigator-argue. I’m not used to arguing and I often don’t see the point. I don’t see the point of jelling, cursing or saying mean things (you probably don’t even mean). If it is to convince me, it’s not working. On the contrary, when people start to raise their voice, it seems to me that they know they’re not right, but trying to hide that by intimidating the other. That’s where you most likely loose me.

Sabina got in the car all was “koek en ei” – good again. Except that I didn’t want to be there anymore.

I asked Primož to stop the car. He did. I got out, took my bag and told them I needed time alone. I went back to Sarajevo where I checked in at my favorite guesthouse, Guest House Bistrik.

It’s not an action I’m proud off. I left the others no option, I totally choose to do what was good for me. I’m still sorry for the drama, but immediately after I got out, I could finally breath again.

It was the right decision.

Last time UP and DOWN

A week later I went up to Jure Franko for one last time. I proposed Primož to look after the hut so he could go skiing. A win-win situation for the both of us, I figured. And this way I could end my Trebević Work Away adventure with a positive experience after all.

Despite the difficult time at the end, I totally recommend everyone to pay Jure Franko hut a visit whenever you can. The location of the hut, the terrace with THE view and the cozy living-room-vibe Primož created is definitely something special.

I’m truly happy I got to be there.