When I open my eyes it’s dark, but I know we arrived in Zagreb. Hello Zagreb! The bus waits for a traffic light, when I look to the right I see McDonald’s and the casino. My eyes search for the church, the church on the opposite side of the building I live. Found it. It’s not the prettiest neighbourhood in Zagreb, but I’m excited to be back. Even though I only live and lived here for a few months, it feels like “my” neighbourhood. And even though I don’t have my own house or apartment, it feels like coming home.

I’m back. Back in Zagreb. This is where I’ll be for the next 6 or 7 weeks. Unlike last year it’s surprisingly warm. My brother texted me that the weather got shitty in The Netherlands since I left, apparently the crazy early spring accompanied me to Zagreb. The climate does worry me, but I can’t help being happy to leave the winter behind. Snowy mountains are awesome, but in the city the white-winter-magic usually disappears after one hour or so. Besides, spring has always been my favourite season, I just love to see and feel nature waking up.

Despite an horrible night in the bus I woke up early the next day. The sun wakes up one hour earlier in Zagreb, so do I. This is how I like it. I never close the curtains, because I don’t want to miss one ray of sunlight. Mornings are the best, early mornings even better if you ask me. Many people not agreeing with me, I know, but I have the luxury to live without a clock. Therefor I can live with the daylight instead.

I nearly never put an alarm, because I can decide myself how I plan my day. I’d like to believe that when you don’t force yourself waking up and you don’t keep yourself awake longer than necessary, you’ll sleep as much as you need. Mornings make me happy. That’s when I feel most energetic. And so, the first morning in Zagreb was a bless. One extra hour and a clear blue sky. How can you not be happy with that? 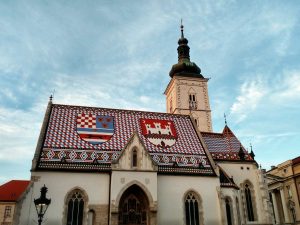 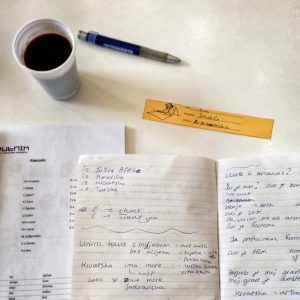 Last year I started to learn Croatian in Zagreb. In five weeks I finished the A1 course which helped me a lot, but I’m still far from having a conversation or anything like that. That’s why I want to continue with A2. I really like the language school (Croatian Language Acadamy, Sputnik), the teachers, the approach and the fact that the groups are very small.

It sometimes felt like I missed some context, I like to dive into the technical details of a language, but I soon realized that we were not just randomly talking. The teachers try to expose you to the complicated grammar step by step. It works for me. When the teacher said “that’s for later, now remember it as a phrase”, I knew there was a reason for the irregularity, but it was too soon to get in to it. Croatian is an overwhelming language, I think you need a little protection, or guidance, if you’d like to hold on.

There’s not a particular reason to learn Croatian in Zagreb other than I like being here. For me the city is not too hectic, but also not boring. How to explain? I guess it sort of feels like Zagreb is on the border between East and West. Zagreb is a middle European city, what means for me that it does not feel entirely strange to be here, but it’s not completely different from Amsterdam and The Netherlands. Hmm, understand? It’s not a different world or a complete culture shock, but it’s most definitely not the same as what I’m used to.

Also Zagreb grows on you. It might not be as beautiful as Venice or as cute as Ljubljana, it might take a bit longer to fall in love, but I think Zagreb has it all. I’m not planning to write a “Why visit Zagreb” blog, but Google it and you’ll find out. The reason I like to live here has more to do with how the city feels and how I feel in the city. Zagreb puts a smile on my face. I feel good. That’s reason enough for me. 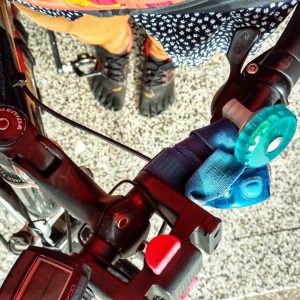 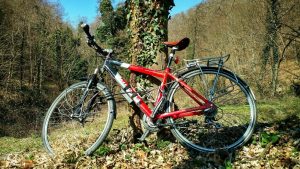 A few years ago a friend from Sweden (who lives in Amsterdam) named my bike “Røda Perlån” which means something like “Red Stallion”. Røda Perlån has been alternately in Zagreb and Sarajevo since I packed my bags to hike the Balkans. That is three years ago. When I’m in a city I like to ride my bike, that the Dutchie in me. In Zagreb it’s definitely possible to ride your bike across town. There are biking lanes and places to park your bicycle, but it’s still a bit of a challenge. Cars don’t like it when you’re on the road, even if that’s where the biking lane is. Pedestrians don’t like it when you’re on the pavement, they usually ignore the incredibly narrow cycle paths on the pavement and give an angry look if you try using them anyway. BUT it is possible.

This year I will take Røda Perlån on a real adventure. After the language course we are going to travel the Balkans together. Biking instead of hiking. First we go to Sarajevo, then to Mavrovo in Macedonia, then via Albania and Montenegro back to Bosnia and Herzegovina, to Mostar. Most likely we will be in Croatia somewhere in September, but who knows. The idea is to do volunteer work in mountain huts in combination with short hikes and other little adventures. Climbing maybe. I hope so.

And after that I don’t know.