Hey there, it’s adventure time. I’m biking from Zagreb to Sarajevo and further on to Macedonia, Skihut Gorica in Mavrovi Anovi to be precise. This year I’ll travel to only a few locations in the Balkans, because I’d like to spend more time in one place. Visit friends, pick up rock climbing and write. But I also want to learn about organic farming and fishing, do volunteer work and learn to speak the language like I did in Zagreb. As long as the weather allows I’ll use my bike as transport. I sort have a route, but I have no idea what I’m capable off. Guess I’ll find out along the way.

I know I’m heavily packed, I got my laptop, too many (note)books, some extra “city” clothes, climbing & hiking gear and what else? A GoPro I have to return to a friend in Bihać. Nevertheless, I’m happy to be on the road again! This blog post describes the first part of my biking trip through the Balkans where I’m rolling along rivers from Zagreb to Sarajevo.

First I followed the Sava river to Sisak where a friend invited me for lunch. Leaving the city took much more time than I wanted, but once I found the right road – a quiet, but good road next to the river – I couldn’t stop smiling. It feels so good to be on the bike again! After lunch, we went to the old fortress near Sisak and decided to go for a drink. And another one. We talked until the sun came up and so the second day turned into a rest day. 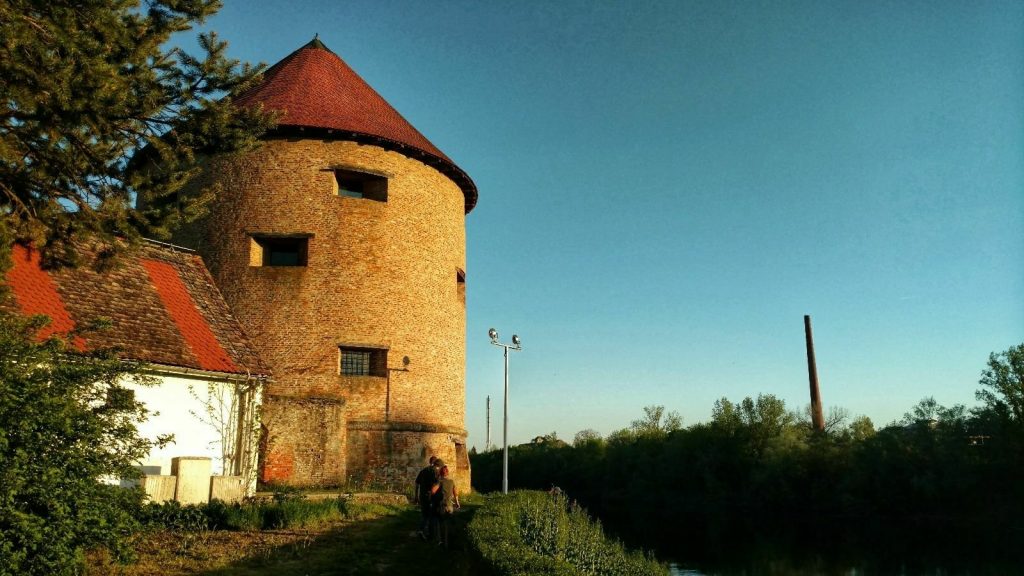 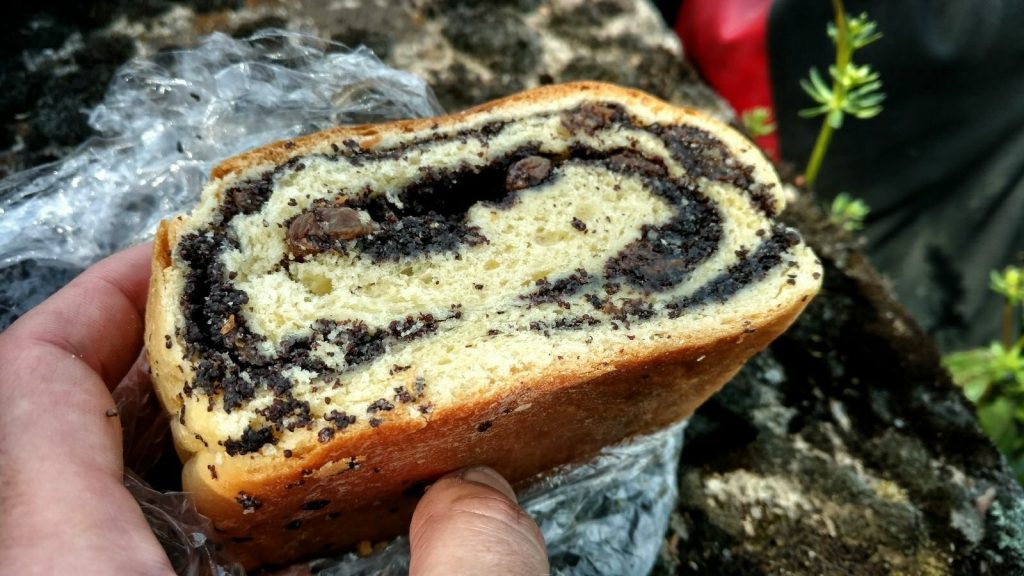 On Eastern Monday I continued along the Sava, through Lonjsko polje nature park to Jasenovac. In Jasenovac I visited the memorial site for the victims of the second world war who were killed in the concentration camp that used to be there. Sad and shocking. I was shocked because I never learned anything about what happened during the second world war in Croatia. It really depends on where you live what history lessons you get. That felt weird.

At the end of the day I switched from the Sava to Una river. The Una forms the border between Bosnia & Herzegovina and Croatia. For no particular reason I stayed on the Croatian side. In Hrvatska Dubica I found a friendly family who let me camp in their garden. The Croatian language course is paying off, I’m so proud to be able to have some sort of conversation. After two biking days I did 175 km, gaining confidence here. Yet, I’ll stick to rivers as long as possible.

From Hrvatska Dubica I followed the Una further to Hrvatska Kostajnica, Bosanska Krupa and Bihać. In Bihać I had lunch with a friend whose GoPro I borrowed. I have to confess that I hardly used it, there was a problem with the battery, and I was not patient enough to figure out how to use a GoPro, how to connect it to my phone, how to transfer the files without taking the SD card out. So, it was about time to return it.

I said it always rains when I’m in Bihać, a friend said it never rained when he was in Bihać. They predicted strong winds and thunderstorms, I got sun. Bihać is so lovely when it’s sunny!

Fear of the other

Along the way I got many warnings because of the refugees (immigrants is the word most people here use), that I had to be careful. For me, it were not the refugees I feared, but the dogs. Both didn’t bother me at all. It breaks my heart seeing people treated like dogs. Street dogs. We talk about them, they steal, they break in houses, they ruined mountain huts, but in fact it only takes a few people to mess it up for all. Just like a bunch of scary dog-experiences make me fear every dog. Luckily my need for freedom is bigger than my fear of the other, for dogs or the unknown. And luckily by travelling I get to see way more of the good than bad.

It’s so easy to be led by fear. It is true that it’s important to be careful, that’s why in this region I often camp in gardens (with permission) instead of in the wild. Also, after lunch with that friend in Bihać I went back to Bosanska Krupa to avoid the road from full of dogs between Bihać and Kulen Vakuf. BUT the main reason was that I wanted to see something new. I’ve been in Una National Park two times before, it’s beautiful, but the rest of BiH is worth seeing too. (and has dogs too) 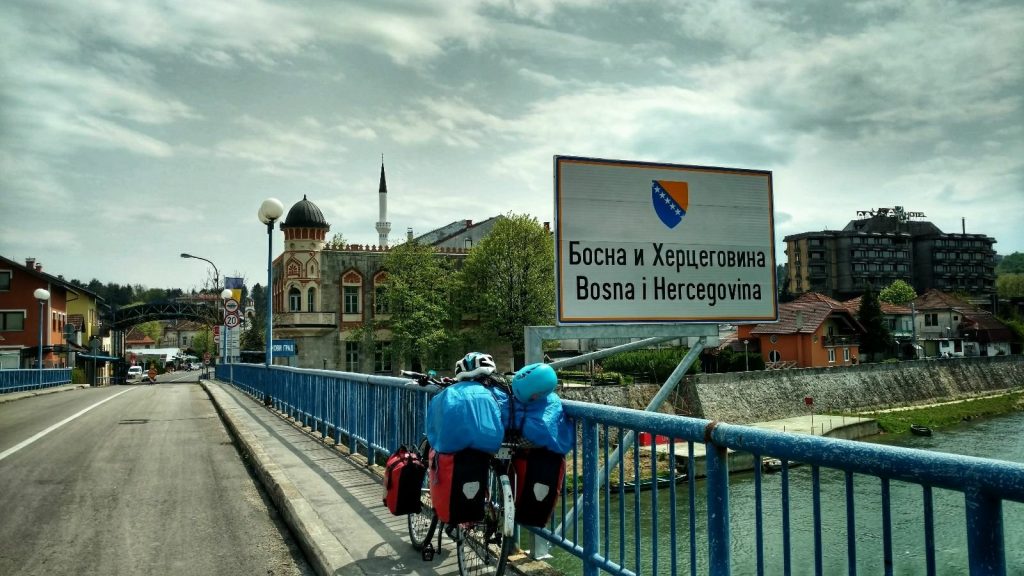 At the end of day 4 I started climbing my first hill. Perhaps I was a bit too opportunistic. “You don’t have to be fast”, I told myself. But when stopping is no option, because you’ll never get back on your bike again, and you can’t switch to any lower gear, it starts to feel fairly impossible. Somehow I managed. I got up on that hill and reached a beautiful plateau that gave the first views of this trip. Yes!

Then the asphalt stopped. No! Neither my bike nor me can handle unpaved roads, let alone hilly unpaved roads. We’re too heavy. A shepherd told me I should go to Zalin. “Longer, but easier.” That’s how I ended up camping at guesthouse Pecanin, such a nice place! Surprisingly it turned out to be part of Via Dinarica Green biking trail, wow! 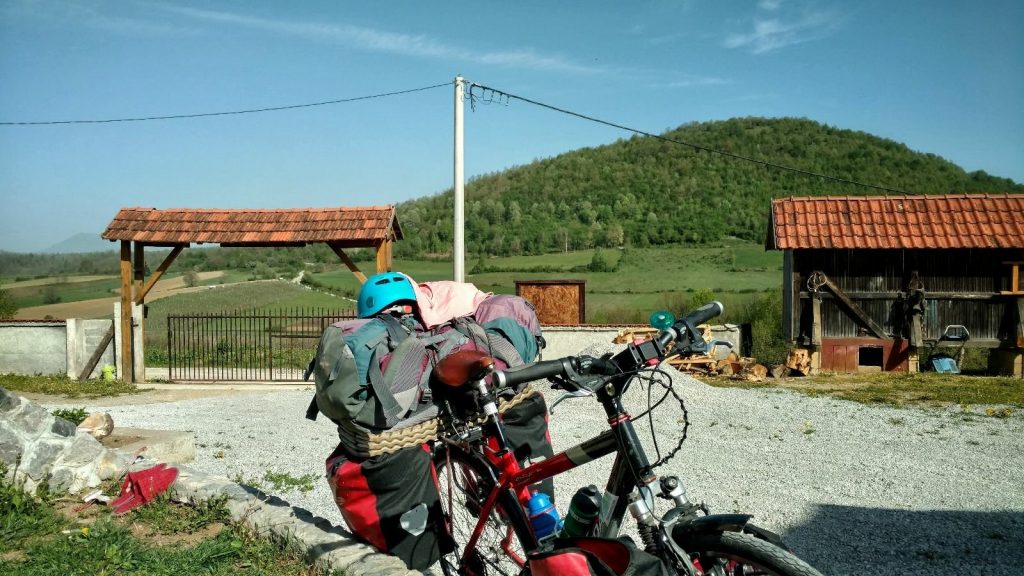 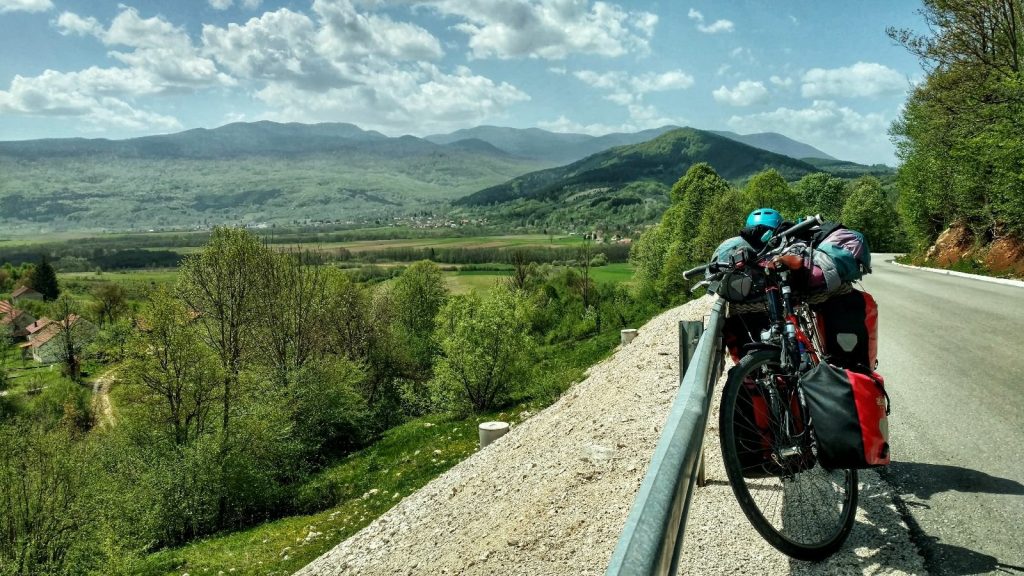 Day 5, time to face it. I need asphalt. My bike is a regular touring bike. It has 27 gears, but it is far from a light-weight-off-road kind of bike. And then there’s my luggage. So, from Zalin I made my way to the main road to Sanski Most. Some roads in Bosnia and Herzegovina are a cyclist’s worst nightmare, but this one was great. Nice slow climbs, nice wide views and almost no traffic. Perfect.

From Sanski Most I followed the river Sana until I found a place to camp. There are many beautiful camp spots on the riverside, but most of it is private terrain. When I asked a group of guys for water they gave me beer. “Sit” they gestured “but I’m actually looking for a place to camp” I protested. “You can camp here!” It was a great place. I had no reason to leave, the guys were super friendly and happy to have me as a guest.

We spoke in Croatian and German and English about music and nature. About city versus outdoor life. About books and films and mountains and people until they had to go home. I could stay. With a little hangover I continued the next day towards Ključ. The asphalt stopped, but the road was mostly flat. Still, makadam makes me twice as slow. Nevertheless, the route was worth it. A wonderful green canyon, wild river and wicked rock faces. Love rocks. 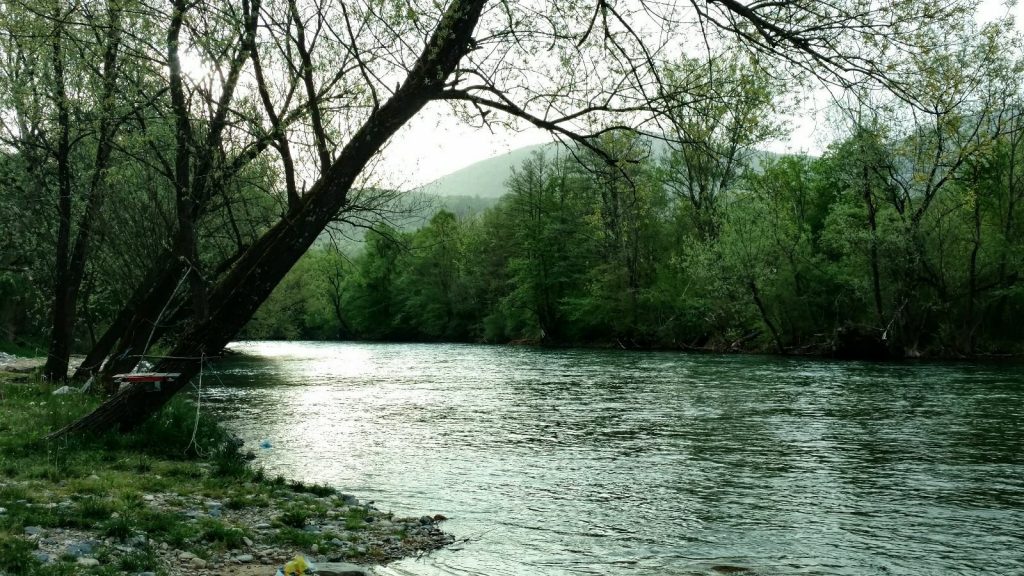 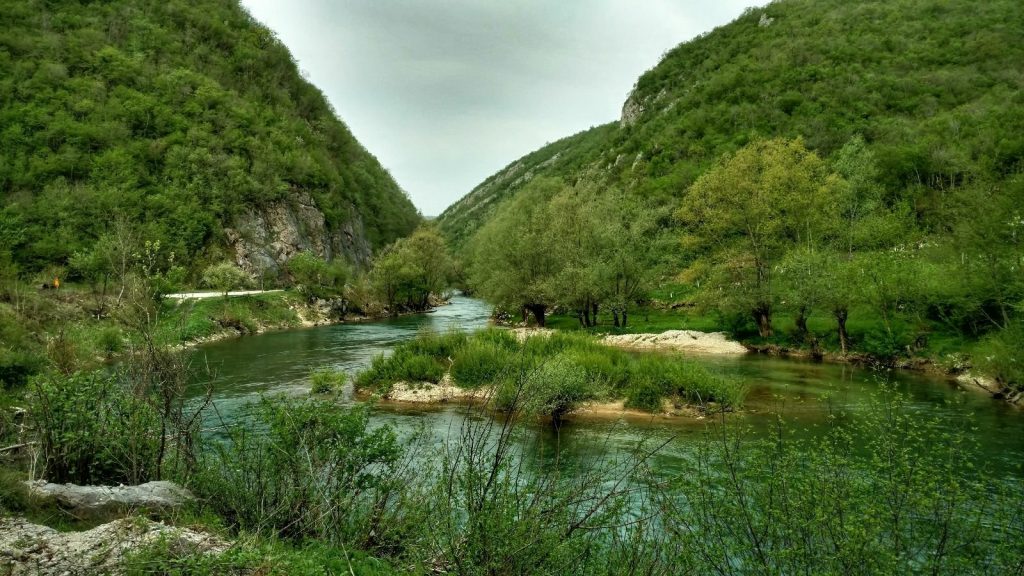 After Ključ a serious climb to Cađavica awaited me. In the meantime I tried to tell friends in Sarajevo when I would arrive. It’s so difficult to plan, I don’t know what to expect, and I don’t know what I’m capable of. In Cađavica I had almost no energy left, sloooowly I crossed the plateau – high plane (highland) – until finally the road started to descend. In no time I reached Mrkonjic grad and Jajce. Beautiful Jajce!

A short break at Plivsko Jezero gave me enough energy to make a few more miles. I pushed through until the sun disappeared. Somewhere along river Vrbas I pitched my tent and fell almost immediately asleep. 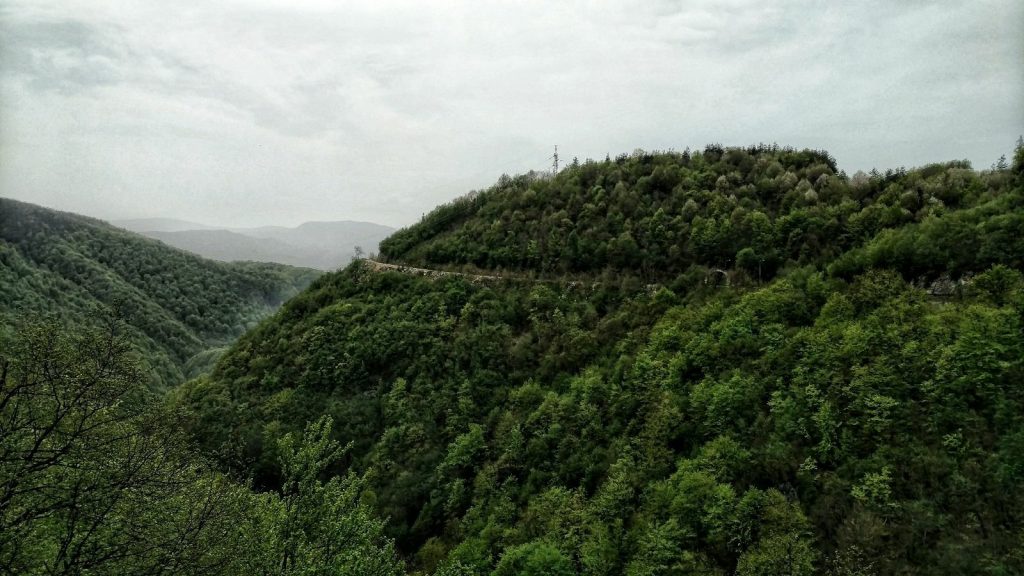 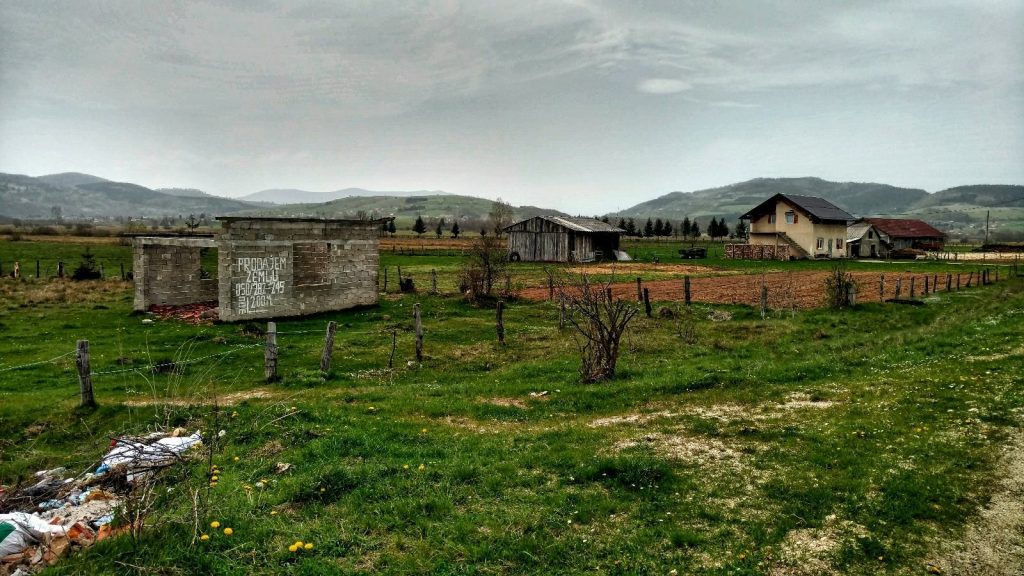 I’m biking valleys, I follow rivers, I chóóse rivers instead of mountains, but it’s fun. For sure, it’s a complete different experience and perhaps next time I would try light weight off-road bike packing, but for now I’m happy. I’m happy to travel by bike instead of busses. And that’s what it is, a green, relatively fast, but still adventurous way to travel. Once I surrendered to the main road, I embraced it. There are different ways of trekking, travelling. I surely love the simplicity of walking, but as long I can carry everything I need with me, I feel free. 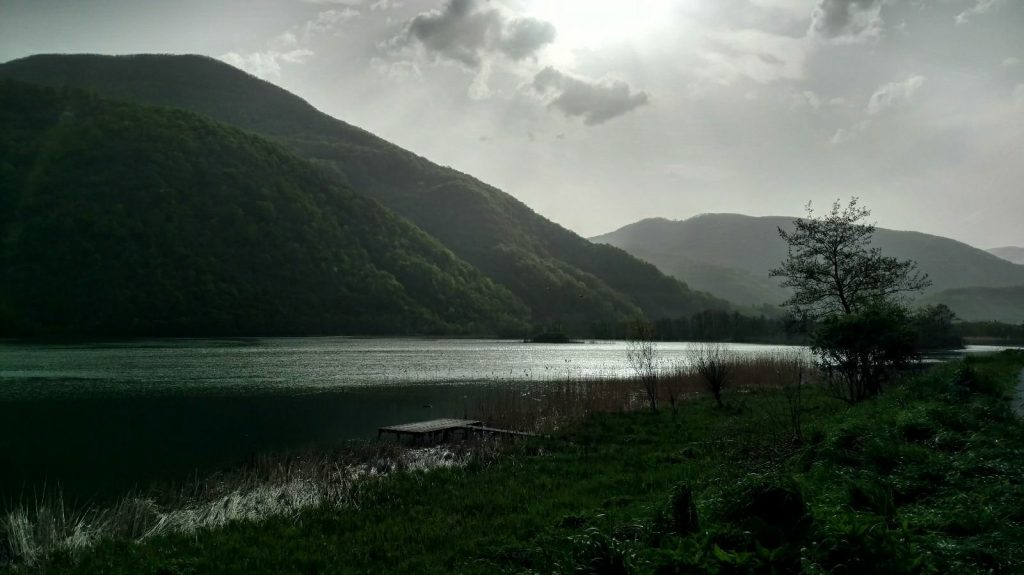 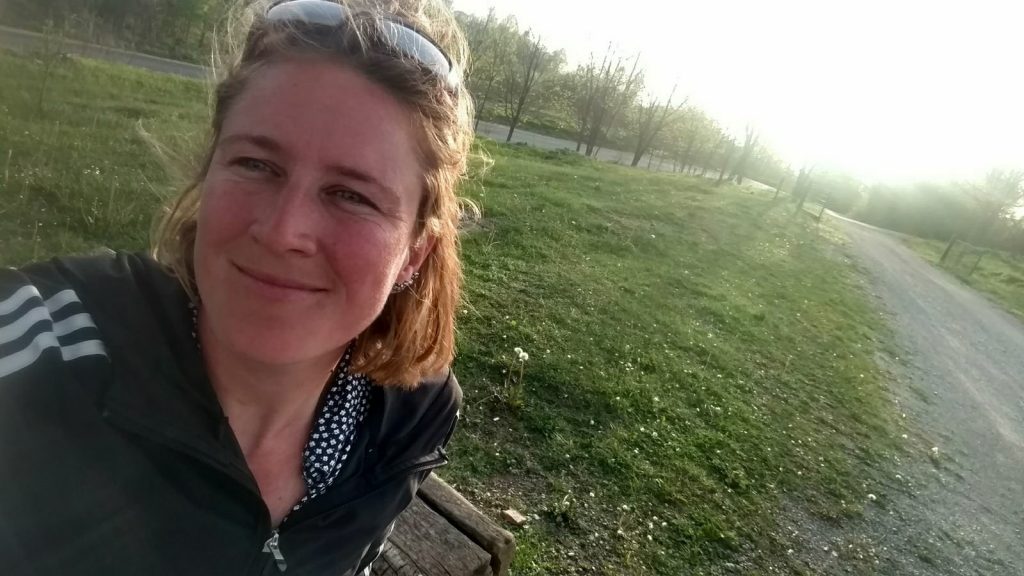 The road took me to Donji Vakuf, then up north to Travnik. I saw Vlašić in the clouds, happy not being there. From Travnik to Vitez was no fun, but luckily most of the traffic choose the highway via Zenica to Sarajevo. Fewer trucks and more space for me. Travnik did surprise me. It has a real nice old town, a huge castle (fortress?) and of course there’s Vlašić mountain, one of my favourites, in the background. I did not take much time for sightseeing, but I’m sure I will go back one day.

At 5, I arrived in Kiseljak. Although I had already biked 100 kilometers, I felt great. And thus I went on. To Sarajevo. A short, but steep climb and then down down down. In front of me snowy mountains showed up. Oh, I love Bosnia’s mountains, but first: Sarajevo. 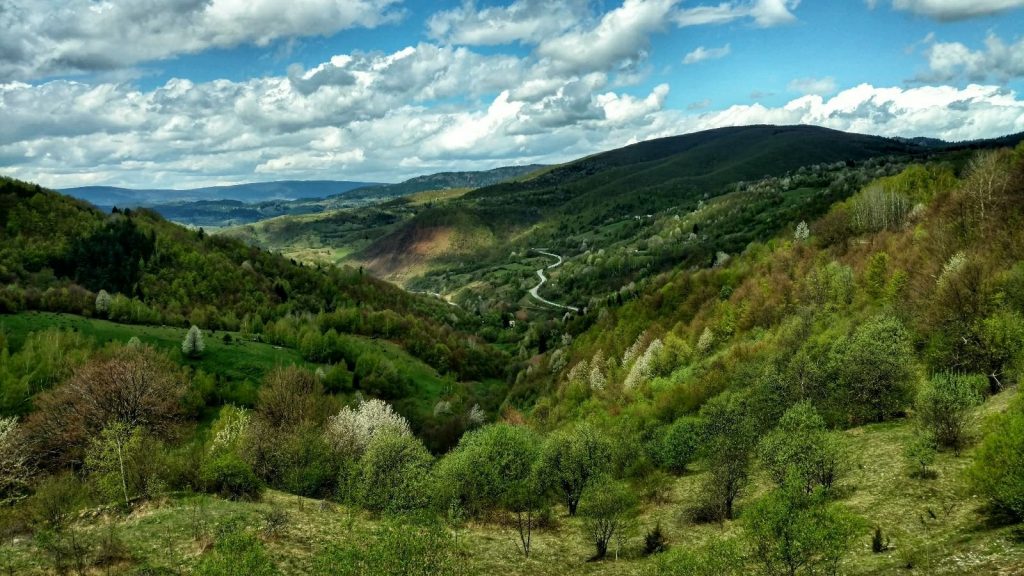 Up from Donji Vakuf towards Travnik 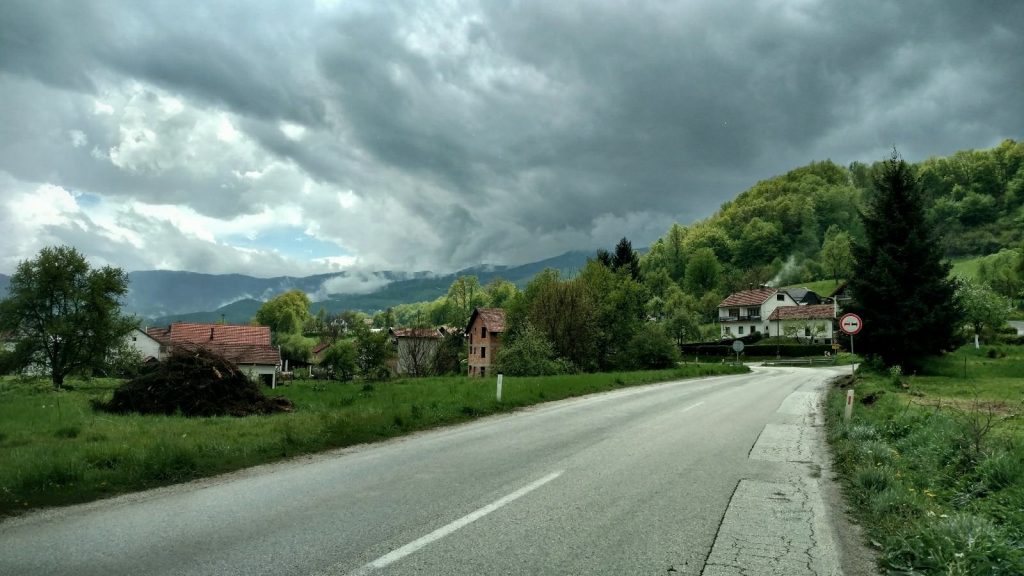 Biking from Zagreb to Sarajevo

Somehow I escaped the hail and thunderstorms. They were left and right all day long, but spared me. With even an hour of daylight left I arrived at a campsite in Ilidža. The location is terrible, tucked in between the highway, the railway and the airport, but they really made the best out of it. The restaurant has a lovely terrace above the water and there were ducks and flowers and trees and grass and Wi-Fi. And warm showers. What else do I need? Sleep.

I texted my friends, couldn’t hide that I was proud I made it. Our original plan to go hiking on Treskavica on Sunday wasn’t doable with the unpredictable April weather (or my tired legs), but coffee at Vrelo Bosne sounded just as good to me. And so we did.

My route on Outdooractive