The 5th of May I arrived in Mavrovi Anovi, at Ski Hut Gorica to be precise. This mountain lodge has been my home base for May, June and July. In the first place I helped out with the usual things like cleaning and making the beds, helping guests to find their way around and providing them with information to have them explore Mavrovo National Park. But there were also quite a bunch of other jobs such as painting furniture, building lockers and gardening for example. And if a good weather window opened, I couldn’t resist running off into the mountains. So, yeah, no reason to be bored.

Soon I realized that North Macedonia is on the edge of the same timezone as the Netherlands. This makes an huge difference. Although I miss the long summer evenings, at 21.00 it’s dark here, I more and more believe that time doesn’t really matter. It’s a concept that actually stands far from what I would call my natural rhythm. In the end it doesn’t matter what time it is when I wake up or when I go to bed. Only problem could be when your surroundings have different “opening hours”. Although a problem, I’m a morning person and I love to have a little (lot) alone time. Love early mornings when all is quiet except the birds. Having different opening hours maybe is more of a blessing rather than a problem.

Living in the mountains, in a mountain lodge, makes it easier to sleep when it’s dark and work with the light you have. Love this.

Can’t say I’m entirely over my fear of spiders, but I at least am now capable of catching them with a glass and piece of paper. Still scream while doing it though. NOT a nice way to start the day, but hey it’s part of the hut life.

If I would have been a cat lover I would have more photos, I took these in the first week, but believe me they were part of my life in the hut just as much as the spiders, the guests and all the other living creatures were. First there were seven of them, but then one day Kotle disappeared. We never saw him again. I honestly felt sad. Also when Shara didn’t show up for food the other day, I immediately feared the worst. It turned out that she often leaves for a few days, she probably charmed the neighbours with her pretty face and gets food wherever she wants. 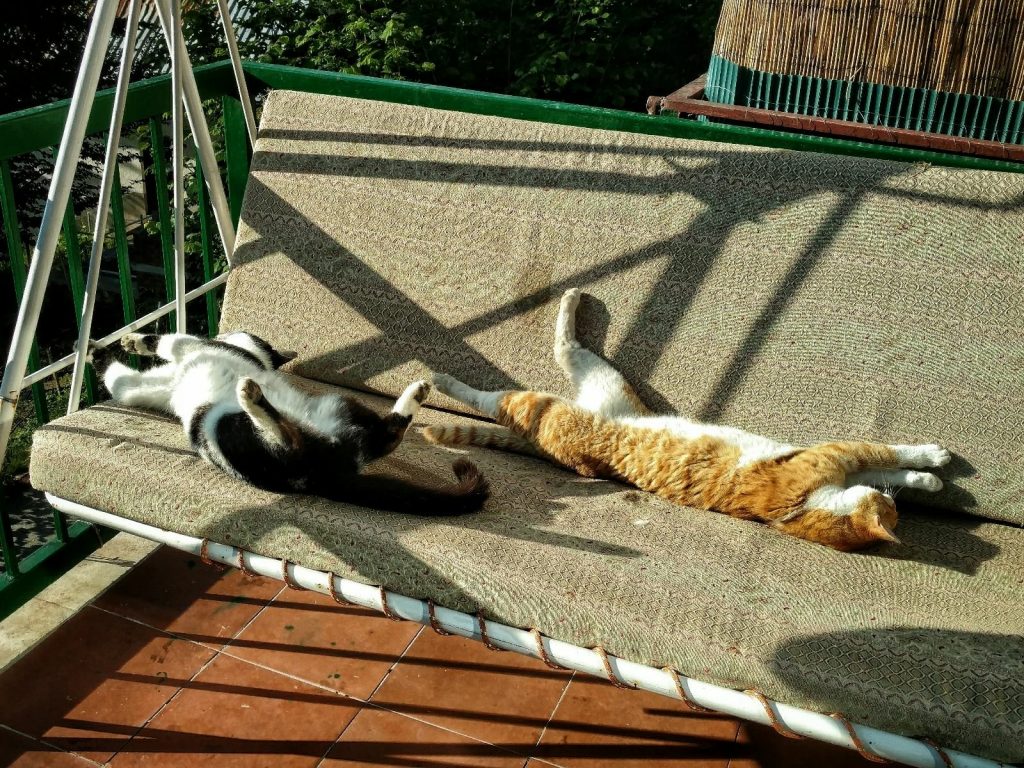 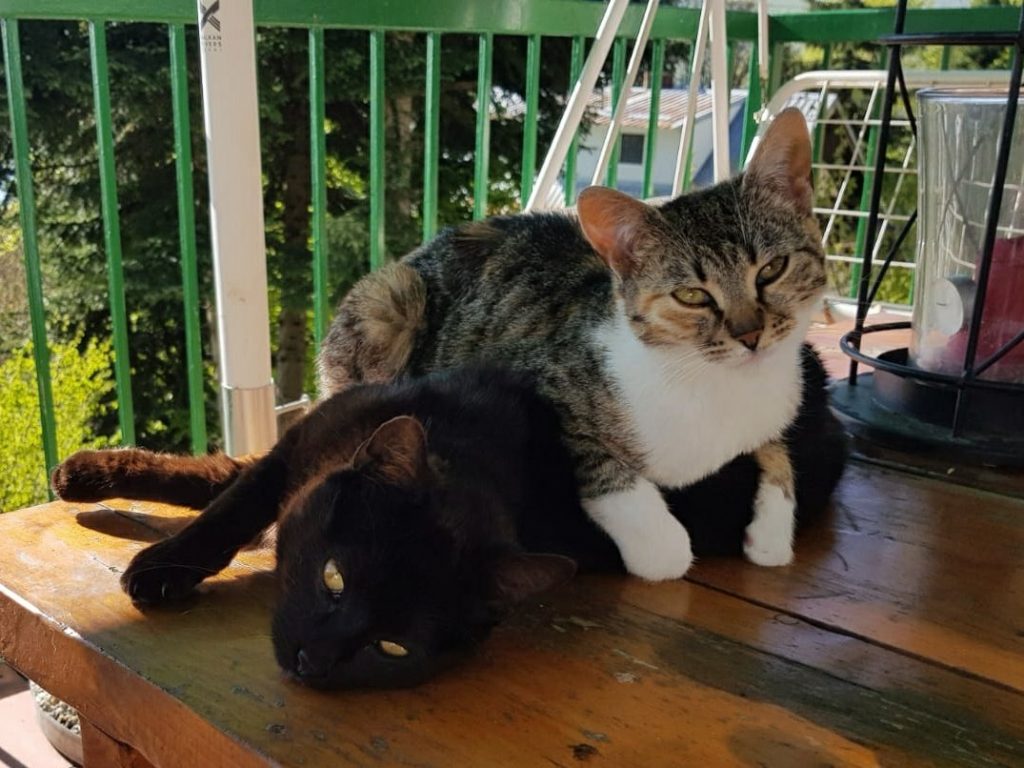 Although I love reading, I often feel too restless or simply am too tired. In Ski Hut Gorica I had all the peace I needed. Adio kauboju by Olja Savičević is a book I found in a bookstore in Amsterdam. The cover writes: “It’s a poetic arthouse-western, situated in the mysterious alleys of contemporary Split.” A crazy good read if you ask me, recommend it!

Last winter when I was in Sarajevo, in mountain hut Jure Franko, I met a guy from Belgium, Kobe, who read a book about Kosovo. That book seemed to give a good impression of what’s up with this country and according to Kobe it was not a difficult or boring history book, but nicely written from different perspectives. I wanted to read it, but couldn’t get my hands on it. One of the first things I saw when I arrived in Ski Hut Gorica was that exact same book. Kobe left his trace and I could read Kosovo, de uitgestelde oorlog by Raymond Detrez.  And he was right, I really liked the critical but non-judgemental style. Definitely a good read, if you master the Dutch language.

Then a friend from The Netherlands came to visit me and she brought me another book: De dochters van de kapitein by María Dueñas or Las hijas del Capitan, not sure if it’s translated to English. It felt a bit like an Isabelle Allende roman, family roman, or how do you call it. A page turner for sure. Loved it.

Maybe my friends think I don’t have enough to read (which absolutely isn’t the case, I’m still carrying four more paper books around…), but another friend send me an e-book about Albania. High Albania by Mary Edith Durham is published in 1909, imagine a woman traveling in Albania more than 100 years ago. That seriously was a different world. I’m fascinated by this woman, by how she writes and of course by her adventurous travels through Albania’s mountains. 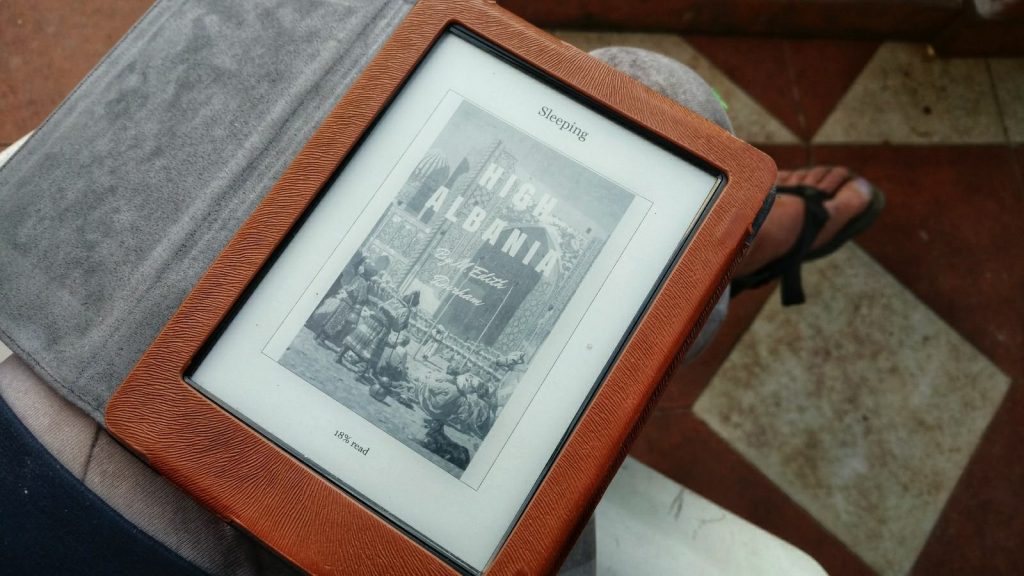 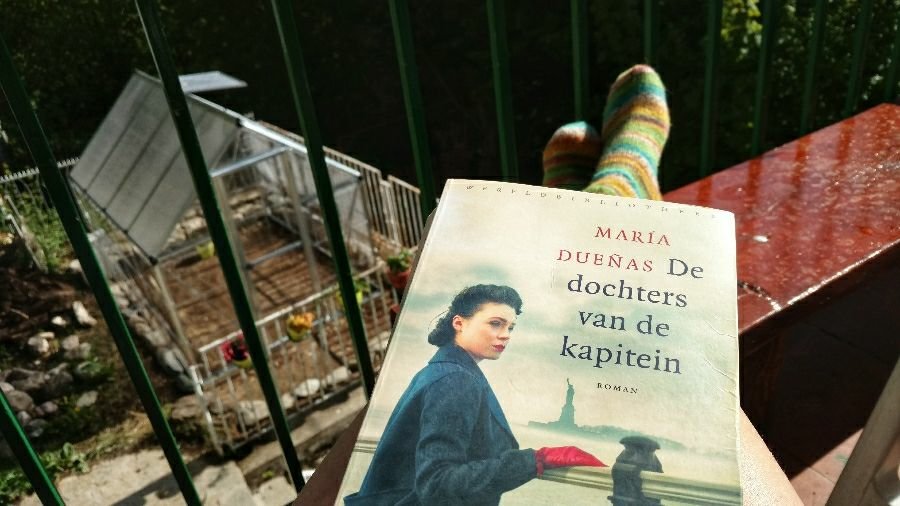 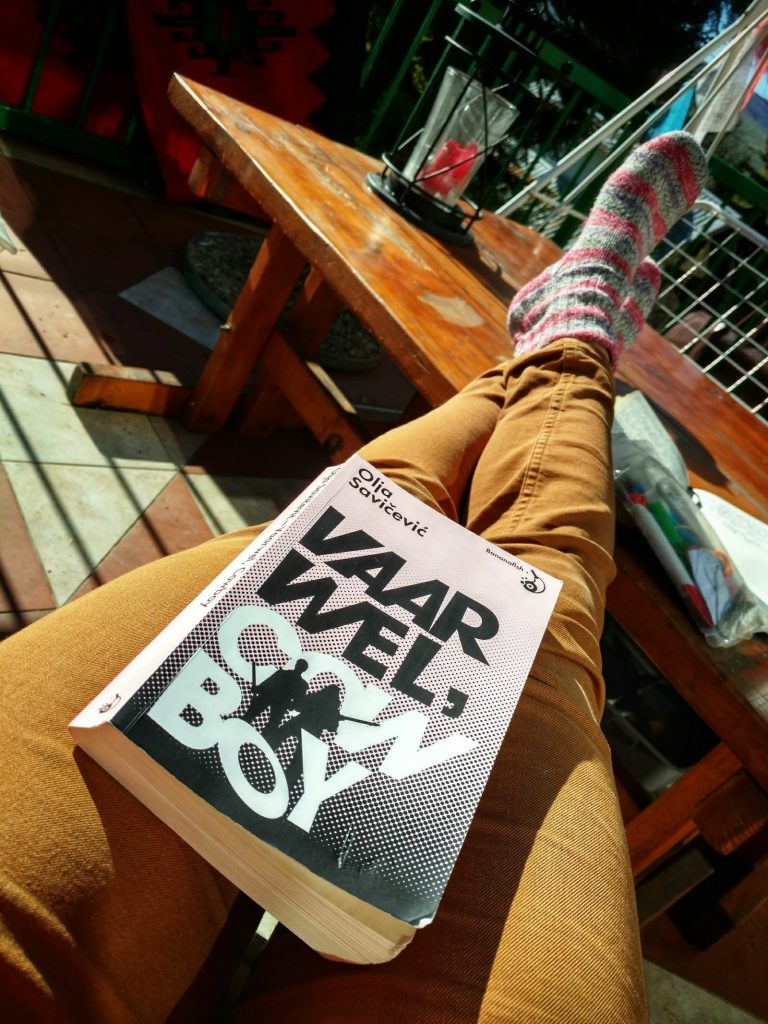 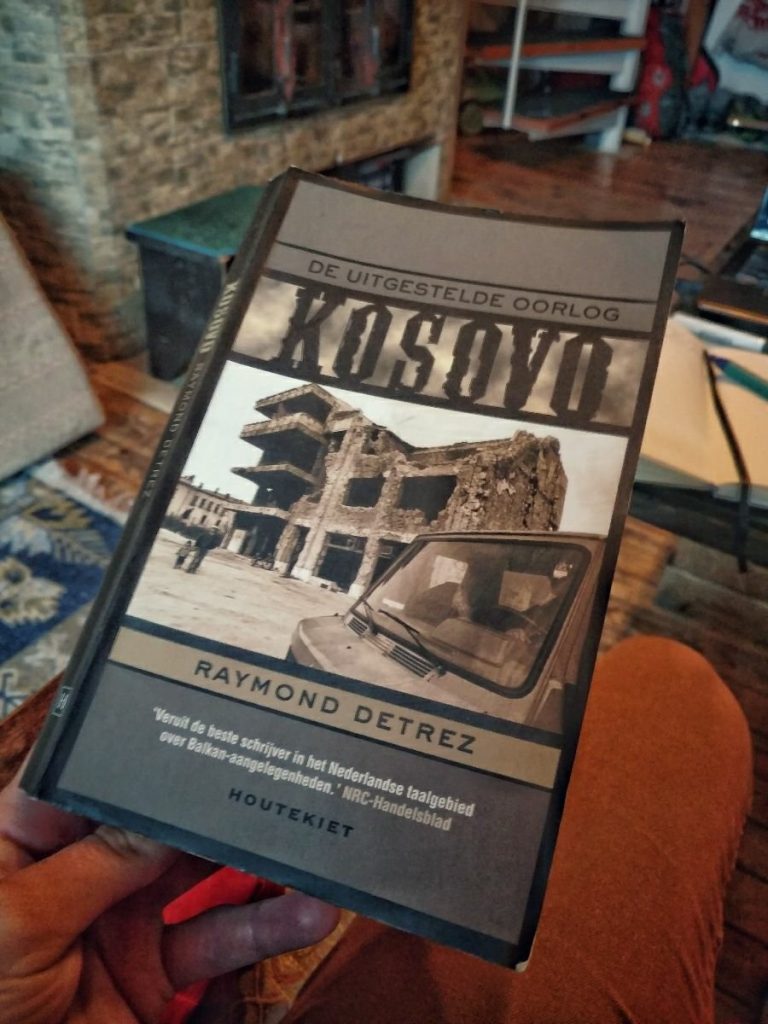 Of course I did not randomly walked into this place. Or well, in a way I actually did, but that was last year. Last year when I hiked the Macedonian Mountain Traverse, I spend one night at Ski Hut Gorica which is located on the trail. I stayed in touch with Dimitar, the owner, and Cosima, his girlfriend. Later Cosima joined me for a few days hiking on Deshat mountain and instead of continuing on my own, I decided to take a break and have some zero’s at the Ski Hut.

Needless to say that I liked the place a lot and decided to come back to stay a bit longer, that’s how I ended up staying three months in Mavrovo National Park.

Obviously I fell in love with the location, Mavrovo National Park is wonderful and Ski Hut Gorica is perfect for outdoorlovers who like to be in nature, while at the same time appreciate the comfort of a hot shower, electricity and a supermarket nearby. But that’s not what made me stay for almost three months.

In the end it’s the people who are making it work or not. In this case the people who are running the hut, Dimitar and Cosima, and the guests. If Ski Hut Gorica would be regular hostel, I would probably not make until the end of the first week. Being able to help bikers, hikers, climbers finding nice trails, to provide them with maps and information and then later to hear about their adventures, that’s what made it so rewarding.

To surround yourself with same-minded people, sharing passions, dreams, visions and adventures. To have a place where outdoorlovers meet, where nature connects people from all over the world. That’s something special. Inspiring.

Working in the garden

One of the things I wanted to do was working in the garden. As a city girl I hardly have experience with gardening, let alone growing your own vegetables or building a green house. Luckily I was right in time to give Cosima a helping hand with her garden house.

Instagram post from Cosima: This spring/summer @evadinaricaproject and I installed the garden house in the front yard @skihutgorica_mavrovo. 🌱 I bought it when I was in Hamburg from a Bauhaus for a good price. 🌱 Since we are at 1300masl elevation here, I am confident the veggies and herbs will survive longer, especially with the raised garden bed inside I will post about next…

Next project was the garden itself. First there were some (!) deep rooted plants we had to get rid, a job that took me over a week to finish. Then the new seating area could be created. Unfortunately I won’t be there to see how it looks with grass, but I’m already pretty proud of what we’ve done so far. 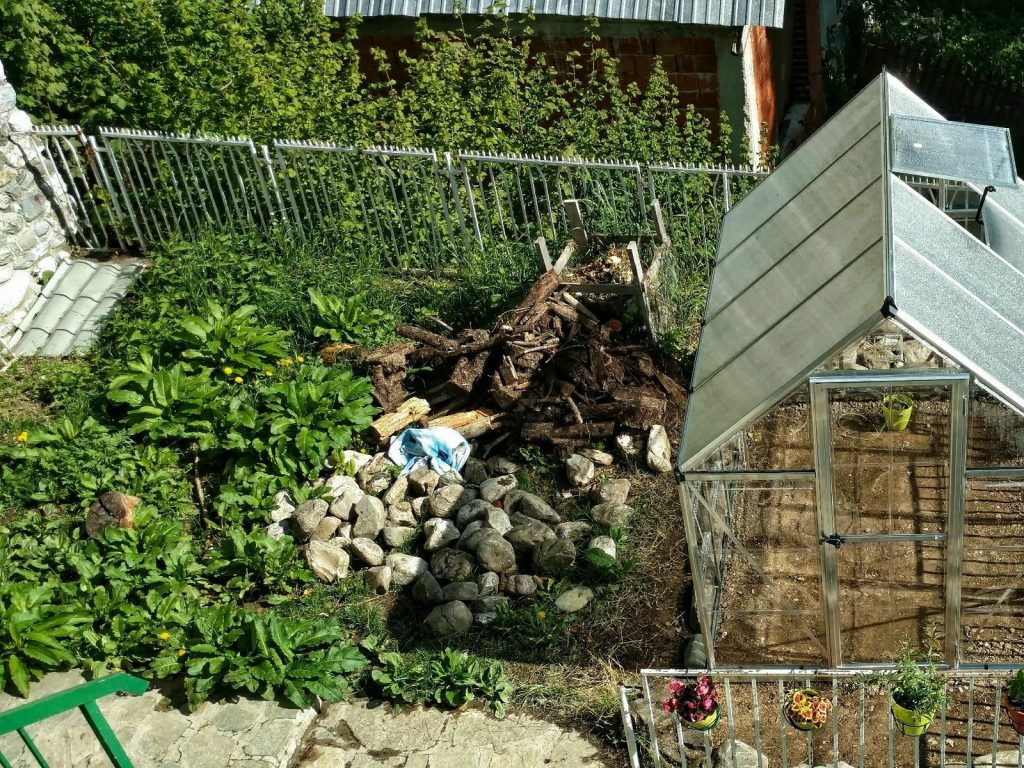 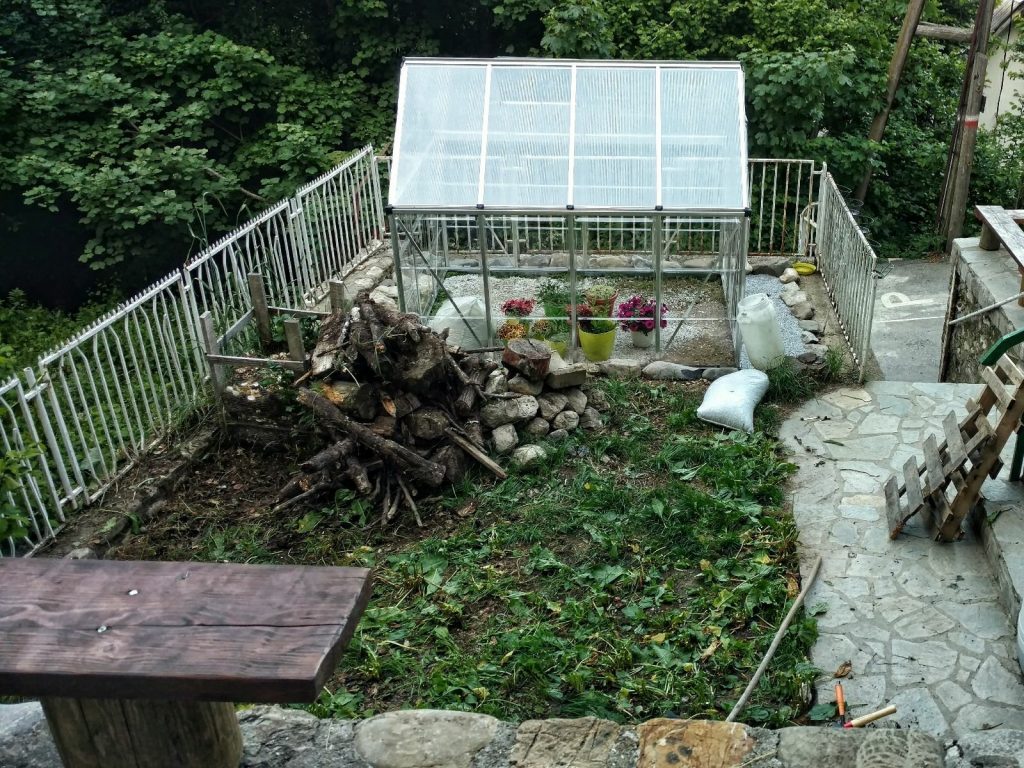 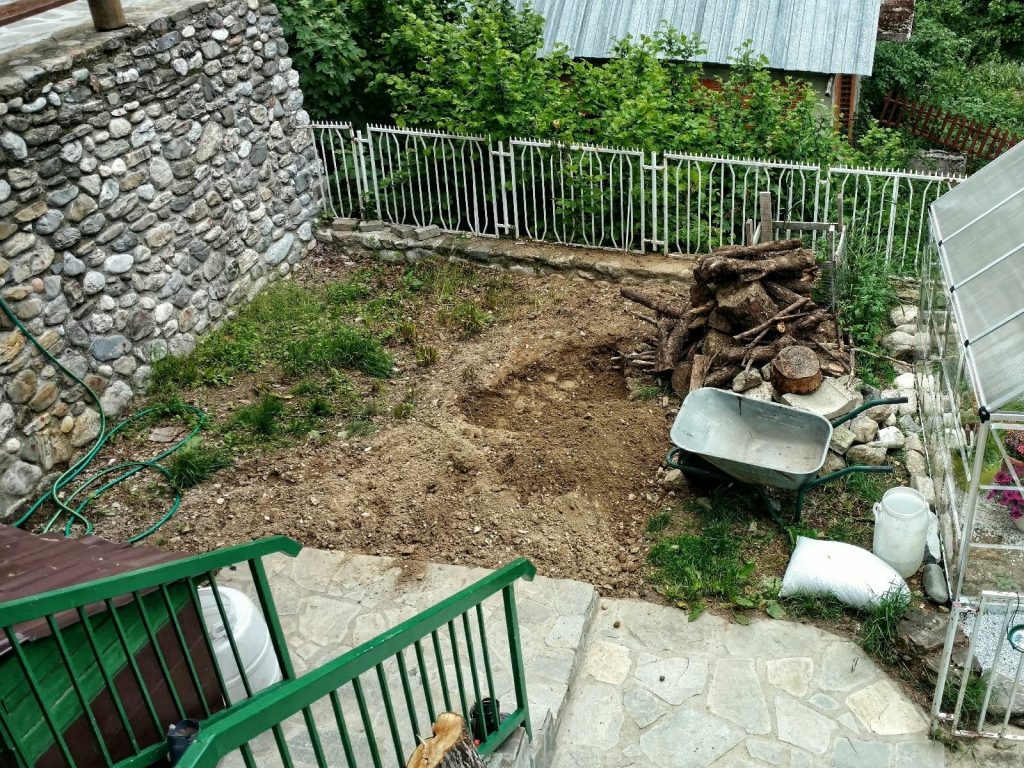 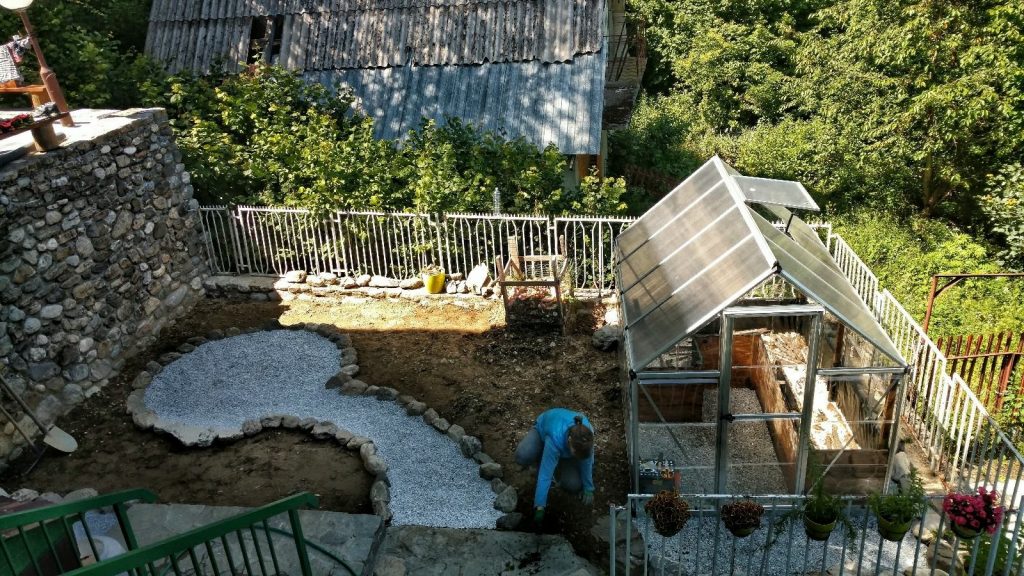 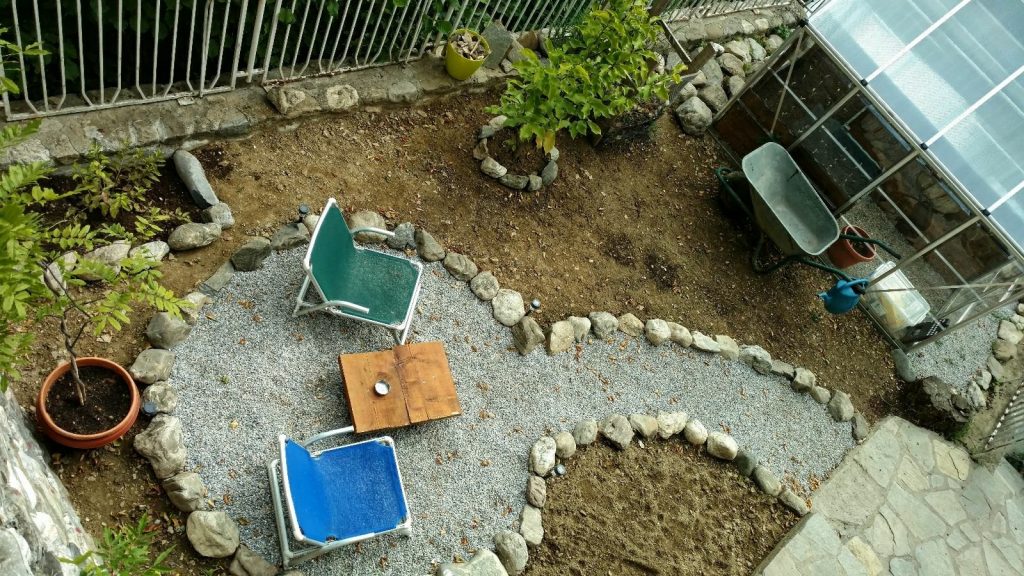 How to make a raised garden bed?

First, I bought the wooden material in a raw form – cut, polished and painted it myself with the help of volunteers @skihutgorica_mavrovo. Then I assembled it and stapled a pond liner to the sides. The bottom is free so the water can exit into the ground.

The next step is to layer the raised garden bed – you start with a layer of wood (big logs and stems as well as wood scraping); then a layer of old leaves from the forest; after that add a layer of compost; and lastly a layer of soil good for planting seeds or seedlings. 🍂🍁🍃🌿🌾

The raised garden bed + the garden house have many upsides, especially in a colder climate: 1) It creates more heat; 2) it has a self-composting mechanism within, so you don’t need to add any or much more nutrients to the soil; 3) the garden house filters out some UV rays; and almost most importantly 4) it keeps out the cats that would otherwise use it as a toilet (as well as other animals)! 🏡🐈🐀💩😂

Oh and one more tip: Use collected rain water to water the plants so they can absorb nutrients from the water as well! 😉

And then after almost three months I said goodbye to North Macedonia. Goodbye Ski Hut Gorica, goodbye Mavrovo and goodbye Dime and Cosi. Thanks for everything 💚 @cosivmeer & @guidedpopov 😘. 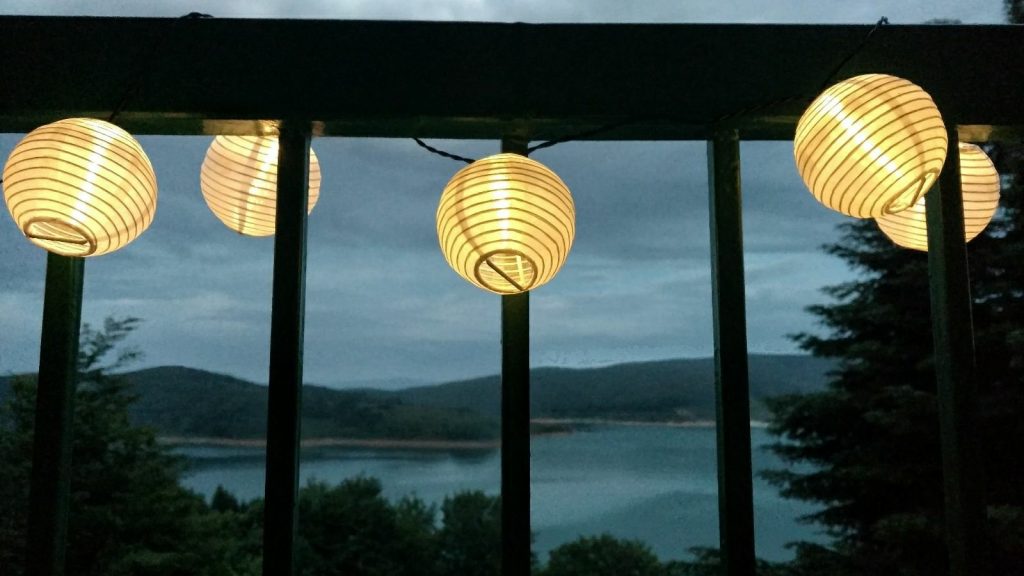 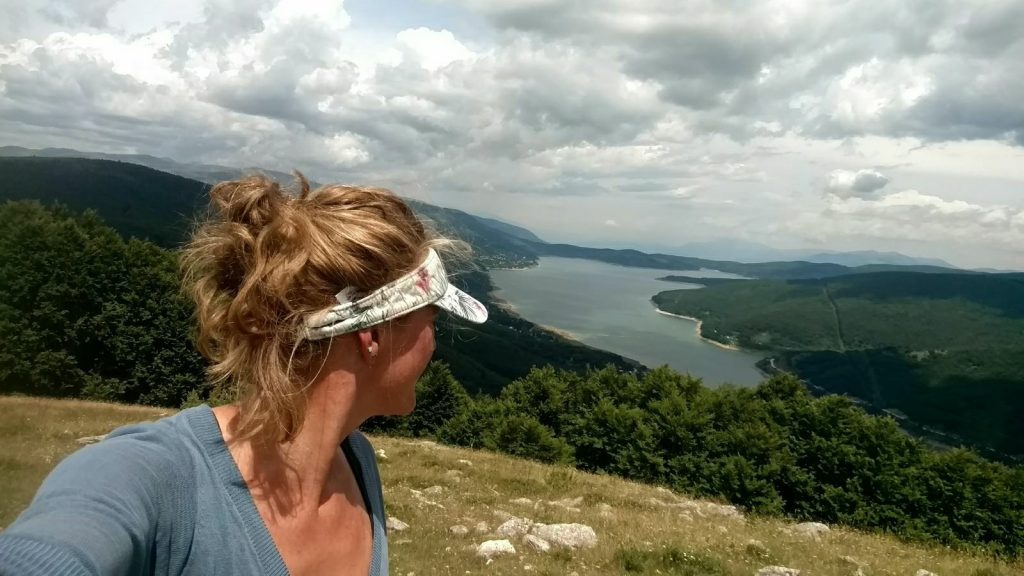