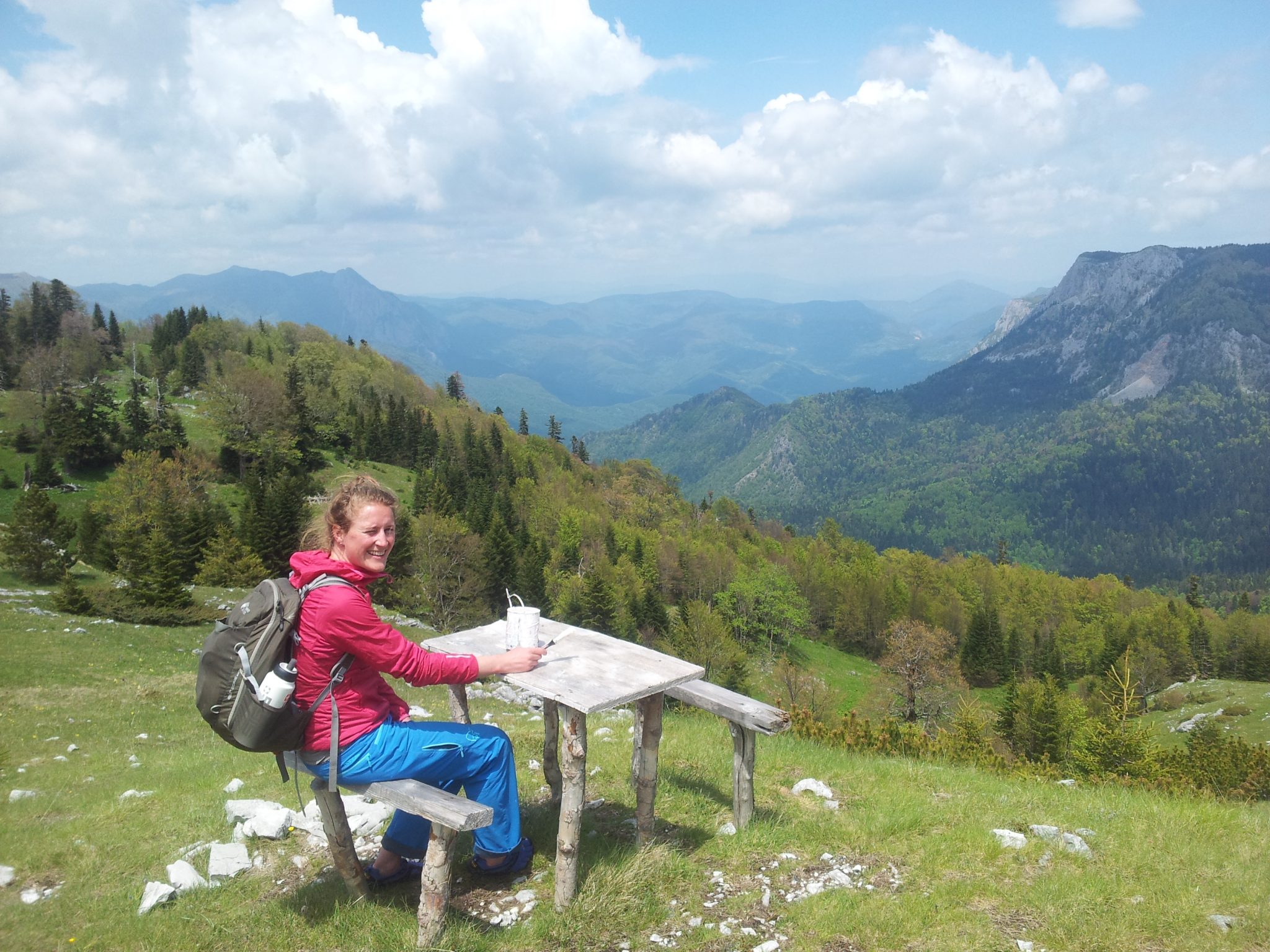 Although the GPX-track of all three Via Dinarica Hiking Trails is available, the Green and the Blue Trail are still more of a concept rather than an actual hiking trail. Even the White Trail has sections which are hardly hikable. I think it’s important to keep in mind that most the Via Dinarica hiking trail is marked and maintained by volunteers and local enthusiasts.

Apart from the three Via Dinarica trails, there are plenty of other outdoor possibilities in the Dinaric Alps. Via Dinarica is definitely more than just a trail. Or three trails.  Basically, Via Dinarica is a platform to develop sustainable eco-tourism and to stimulate local economical growth. The challenge is to raise awareness for the importance of nature protection and to preserve the authenticity of the region. That takes time.

It’s my mission to hike all three Via Dinarica trails, to explore the Dinarides ánd share my experience by telling my story. The Balkans fascinate me. Via Dinarica inspired me to do something with this fascination. With my stories I show you around. I take you along on my journey through the Balkans, the Dinarides, the Via Dinarica and beyond.

At the moment I’m working on detailed trailnotes with more practical information.

During the summer of 2016 I hiked the Via Dinarica White Trail. Equipped with a big big backpack, my favorite FiveFinger-shoes and a brand new super-the-luxe GPS device I hit the trail. I crossed the Balkans from Albania through Montenegro, Bosnia and Herzegovina and Croatia all the way to Slovenia. An adventurous journey along countless different mountain ranges, ridges, cliffs, canyons, valleys, rivers, lakes and prominent peaks in the Dinaric Alps.

I have to point out that I hiked the Via Dinarica in reverse, so I started half June in Albania and ended in autumn in Slovenia. Absolutely beautiful, but there was a lot of snow, melting-water-rivers and wild waterfalls in Prokletije. When I arrived in Slovenia I got snow again on Nanos.

The Transversal in Macedonia is a hiking trail in Western Macedonia that connects Šar with Bistra and Stogovo mountain. It runs from mountain hut Ljuboten to Crvena Voda or Ohrid if you don’t mind a road hike at the end. Some see it as an extension of the Via Dinarica White Trail or promote it like that, but the Transversal in Macedonia has an history of its own. In 1975 Macedonian mountaineers set the trail as the “Prva Makedonska Transverzala”. I wanted to follow into the footsteps of those first Macedonian mountaineers, but as I came from Kosovo, I started in Štrpce.

Unfortunately I didn’t manage to include Korab, Macedonia’s highest peak, but in 2019 I will come back for the extended version of the Transversal in Macedonia. Check out my trailnotes for more detailed information about the Via Dinarica in Macedonia.

The Montenegrin section of the Via Dinarica hiking trail uses the Crnogorska Transverzala (CT1) to cover the magnificent mountains of Montenegro. To cross the between Albania and Montenegro the GPX-track took me from Vermosh up on a macadam road, but disappeared in a pretty wild waterfall. Another intensely overgrown non-existing “path”. And thus I had to find an alternative way to leave the country. I stumbled upon an hidden route on the other side of Vermosh. A slightly overgrown, but a nicely marked cross border route via Rikavačko jezero.

Highly recommended alternative from Buško jezero to Konj, Kamešnica, Troglav, Dinara and Knin. Or the other way around. The route is called put Oluje – named after a military operation in 1995, “operation storm” – and is well marked. It is a combination of macadam roads, old shepherd paths and hiking trails. Note that this route crosses the border without passing a checkpoint. It is possible to leave the Put Oluje at Planinarsko Sklonište Sveti Mihovil and pick up the Via Dinarica to Kamensko.

To avoid the bushwhack-sections between Vratnik and Crni Lug I frequently took a super scenic detour on the road. After Risnjak I wanted to hike from the Croatian Snježnik peak to Veliki Snežnik in Slovenia, but that’s not an official border-crossing. The White Trail goes to Čabar, but these stages are terribly neglected after a big storm a few years ago. Instead I switched to the Blue Trail and improvised a route to a different border checkpoint, the one near Rupa.

Also in Slovenia I hiked an alternative route. The Via Dinarica hiking trail crosses the so called Green Karst region, a relatively unknown part of Slovenia, but it totally stole my heart. Lovely legends and funny fairy tales are coloring the region. I’m super happy to see that my alternative route is now part of the official Slovenian Via Dinarica Hiking Trail, yay!

For more practical information have a look on my “Via Dinarica Practical Information” page.

I decided to come back for the Via Dinarica Green Trail. Again, I created my own route through Slovenia. This time it connected the Via Alpina Red Trail near Predjama with the Via Dinarica Green trail in Croatia. In Croatia I followed the official Via Dinarica Green Trail GPX-track which was surprisingly accurate. The Bosnian section though, well, that was a different story. There is a Bosnian Green Trail in the making, but there is hardly any information about it. Besides, it’s not merely a hiking trail, there are (mountain) biking and rafting stages as well. Here is my Green Trail tour in Bosnia and Herzegovina, almost 1000 kilometer long hike from Bihać to Višegrad.

The fact that the Green Trail isn’t finished, doesn’t mean it’s a no go. On the contrary. For the pioneers among us, this is the perfect moment to Explore the Dinarides. It’s quiet, untouched and your experience can make a difference for future Via Dinarica hikers.

During the wettest June ever I started to search for a Green Trail through Serbia. All I had was a rough line and heaps of GPX tracks from Wikiloc. It turned out to be way more difficult than I expected. The concept routes takes you from Tara National Park to Zubin Potok in Kosovo. I choose a different direction after Sjenica and crossed the Pešter plateau towards the border with Kosovo.

The Via Dinarica Blue Trail is barely walked at all. Due to the seriously high temperatures and extremely dry summers, especially on the coast, it’s best to hike the Blue Trail in autumn or spring. This is also the best way to avoid the massive tourism that unfortunately comes along with a beautiful coastline.

At the end of 2018 I finally got to explore the Macedonian and Croatian Blue Trail. I hiked from lake Skadar towards the trailhead of the Primorska Planinarska Transverzala (PPT) or easier said, the Montenegrin Coastal Trail. From Herceg Novi I headed to the border where I picked up the Via Dinarica Blue Trail in Croatia. This Blue Trail ends somewhere on the border with Slovenia, but I decided to finish on Učka, close to Rijeka.

Maybe I extend my Via Dinarica thru-hike through Istria or to the Slovenian coast or to the new White Trail trailhead. Then the circle is round. Keep you posted.

I put a lot of time and effort in making this information available. So yes, I accept your support. Feel free to drop a donation and enable me to keep this blog going!

Buy me a Coffee